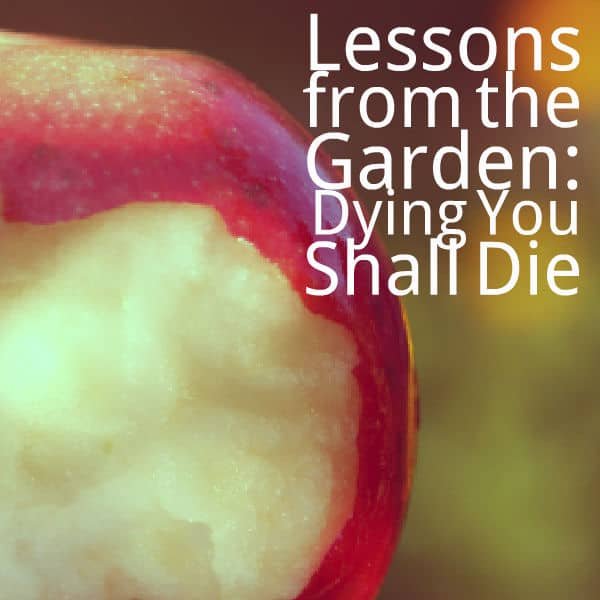 Genesis 2:16-17, “And the LORD God commanded the man, saying, “Of every tree of the garden you may freely eat; “but of the tree of the knowledge of good and evil you shall not eat, for in the day that you eat of it you shall surely die.”

Genesis 3:4, “Then the serpent said to the woman, “You will not surely die.”

As we continue to explore the numerous theological lessons that can be gleaned from the first few chapters of Genesis, lessons that lay the foundation for understanding much of the rest of Scripture, we come to God’s command to Adam and the temptation of Eve by the Serpent. The focus will be on the understanding of what God meant by the penalty for disobedience, namely what exactly is meant by “you shall surely die.”

Taken at face value in its typical English translation, one would assume God meant that if man partook of the fruit from the Tree of the Knowledge of Good and Evil, physical death would ensue. After all, Genesis 2:17 states “you shall surely die.” The meaning of the Hebrew word die (muwth) means to die. With that said, questions rightly can be asked as to what kind of death would ensure and if physical death was the focus, why then did Adam and Eve not immediately keel over and die the moment they disobeyed God.

Some, perhaps attempting to side step these questions, have stated that since Adam and Eve did not immediately experience physical death the moment they sinned, that has to mean God was speaking of merely spiritual death given sin creates a spiritual separation between a holy God and sinful humanity. Spiritual death is certainly an undeniable aspect of the impact of sin. After all, the movement of Scripture is one towards dealing with this problem with the end result of a full restoration of relationship between God and man.

This is not the full biblical and theological picture; however, as death also speaks to more than physical separation between God and man. If we did look into the context and in particular the presentation of words in the Hebrew, the answer to this puzzle comes into clear focus.

There is a specific manner in which die (muwth) is presented. In our English translations, this verb construct is not noticeable. However, in the Hebrew, there is a double verb used. This type of construct identifies a process, an immediate reality that will come to finality at a future time. The actual phrase should read “dying you shall die”. We can now begin to see that death was not commanded to be an immediate dropping dead event. Conversely, death would be a process that would eventually ensue in a physical death event when man would return to the dust from whence they came and the breath of life given to them by God to allow them to be a living being would return to God.

We see this death process noted elsewhere in Scripture. For instance Romans 8:22 states “the whole creation has been groaning together in the pains of childbirth until now.” Creation did not immediately wither up and pass away when Adam and Eve sinned. Instead, the universe is slowly but surely decaying, indicative of the groaning noted by Paul in Romans 8:22. We also note in an everyday sense the reality of growing old and dying. This death and decay process is a result of sin and is rooted in God’s command that dying you shall die.

The twisting of God’s command by the Serpent (nachash) now begins to make sense. Once again we have to look at the construct of the Hebrew verb translated as die (muwth) as used by the Serpent. Instead of repeating the “dying you shall die” truth stated by God, instead a single verb is used. A small yet important twist that denied this physical death process. The lie that was presented was that physical death would not ensue with sin. Instead, man would become like God. Now exactly what is meant by becoming like elohims (gods) is a discussion for another day; however, the intent is quite clear, namely a subtle twist of God’s command which both Adam and Eve fell for resulting in the true result of sin taking place, the process of physical death and of course the reality of spiritual separation from God.

Some may ask why this has any level of importance. Why should anyone pay attention to Hebrew verb constructs? For starters, we have noted in this series the importance of the first few chapters of Genesis and how they inform our understanding of the remainder of Scripture. Thus having a proper grasp of the result of sin and the reality that death and decay are a result of sin, provides us the basis to understand the message of the gospel. The glorious message of the gospel is far more than getting saved so you can to go heaven. The message of the gospel is the promise of redemption, the fixing of the sin and death problem. What is the core of the sin and death problem? It is both physical and spiritual death. The promise of the Messiah our Redeemer is rooted in the fact His sacrifice on the cross served as atonement for sin to deal with the spiritual death. Furthermore, His death on the cross and subsequent resurrection provides us with the glorious promise that the physical death that came as a result of sin would also be dealt with when Messiah returns. Certainly death will come to us all unless we are alive when he returns; however, we know death ultimately has no sting for the believer. The dying you shall die will one day be replaced with eternal life, the return to the Garden.

Here in the first two chapters of Genesis, we find yet again a very important theological concept that is further unpacked and presented over and over in the rest of Scripture. Sin resulted in physical and spiritual separation between God and man. God promised that the seed of the woman would triumph over the seed of the Serpent. That promise took place on the cross and will come to its ultimate and final promise when Messiah returns and forever deals with the sin and death for all eternity. Noting the seeds planted in the Garden in these formative chapters of Genesis helps us understand what we are looking forward to when we return to that Garden in eternity future.