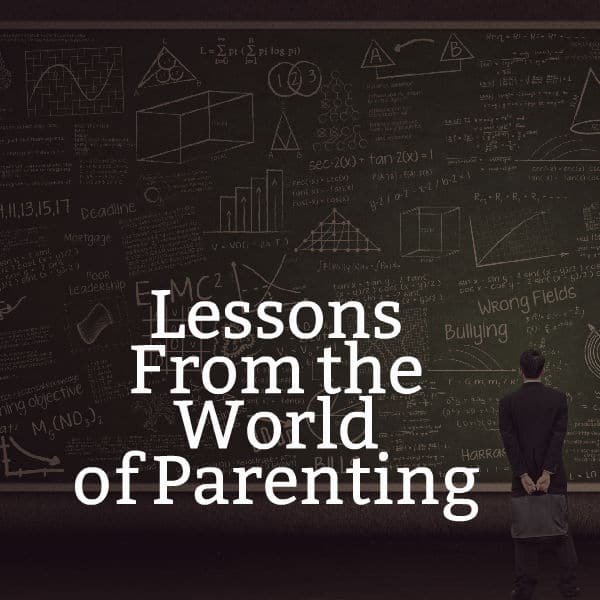 Lessons From the World of Parenting

Deut. 6:7-8, “Impress them on your children. Talk about them when you sit at home and when you walk along the road, when you lie down and when you get up. Tie them as symbols on your hands and bind them on your foreheads. Write them on the doorframes of your houses and on your gates.”

We are the proud parents of a 14 year old daughter. She is a joy and a treasure. Now anyone who is a parent can attest there are days when your child does not seem like either a joy or a treasure. They test your patience, act in a rebellious manner, are disrespectful, and at times seem to thumb their nose at the godly guidance you have provided. If you have not experienced such things as a parent as yet believe me when I say your time will come.

But wait you might declare. The Bible commands parents to impress upon our children the commands of God and also notes that if we train up our children in the ways of God, when they grow up they will not depart from those statutes. Why then is my child acting in rebellion when God said if I teach them His ways they will not depart from those ways? Is there a disconnect going on here? The answer is there is no disconnect. Yes God commands parents to instruct their children in the ways of the Lord. God’s commands as found in His Word should be the backbone of all we do in our homes to the point where it inculcates our daily actions and serves as the very foundation for our lives. We are to train our children up in the ways of the Lord with training meaning a constant state of action.

Here is the reality. Sin is still an issue. The allure of the world often shines brighter than following God’s ways. Our enemy makes the battle a difficult one. Understanding the nature of that battle is essential for parents. If we naively think our children are constantly walking in righteousness, it is no surprise then why some parents are so shocked that little Susie or little Johnny was out drinking with their underage buddies last Saturday night and were not at the house they were supposed to be.

Parents should operate under the trust but verify approach with the amount of verification dependent on the trustworthiness demonstrated by the child. Why is this necessary? Am I not supposed to trust my child? Now think about that question for a minute. When you were your child’s age, what were the shenanigans you pulled? Were you a perfect child? Did you not enact a long string of fibs believing your parents would be none the wiser? If you are still not convinced, let me share a recent personal example of why it is necessary for parents to trust but verify.

We discovered that our daughter had been continuing to do something we had directed her not to do. Now after the first round of discovery, there had been a lengthy conversation about the trail of lies that had taken place on her part, why honesty is always the best policy, the dangers involved with her actions, why lying breaks the valuable bonds of trust, and punishment enacted that was befitting of the infraction. After a period of time when it appeared the lesson had been learned, we began to move back to allowing access to certain devices at home that had been misused.

Now after a few weeks, we began to notice a few behavioral patterns that gave us pause. After checking into our suspicions (trusting but verifying), we discovered the unfortunate reality that the aforementioned issue had once again surfaced meaning there was no real element of repentance on the part of our daughter with the spirit of rebellion and lying continuing to rule the day. Of course this caused a great deal of disappointment and it resulted in yet another more firm round of conversations and a more stout application of punishment.

While we were certainly disappointed, her actions were not surprising. This is not to say we expect her to constantly lie as if this is her lot in life to be a liar until her dying day. However, we do realize the allure of the world and the enemy’s wiles. Deception is one his greatest and most used weapons. Man often succumbs to the temptation to lie instead of understanding the beauty of truth. This means that dealing with our daughter telling us lies was not surprising. Crushing in many respects, but not surprising. It is our God given duty to instruct her in why it is always best to be truthful. Lies are the actions of the wicked and the people of God are to be holy as God is holy. God does not lie so this means we should not lie.

How do we deal with this behavior? It is not easy that much is certain. Punishment is of course necessary, but it must be implemented under an overarching umbrella that relays to our daughter that the punishment is a tool that is utilized in a spirit of loving protection. Remember those whom God loves, He chastens (Heb. 12:6). If we truly love our children, we will address sinful behavior in a loving yet firm manner. Parents need to train their children in the way they should go and at times, the loving crook of the shepherd needs to be used to bring the sheep back to the fold.

The broken trust that now exists is difficult. Through this experience I am reminded of my relationship with God. I have had to ask myself in what ways am I not being truthful with God. Keeping a perpetuate lie going on with the One who knows all is a ridiculous notion at best is it not? So why even try to attempt such a charade? Lying is an abomination to God. This is a truth my wife and I are trying to relay to our daughter, but I humbly admit it is a truth I too need to be remind of and embrace.

I encourage all you parents out there who may be going through issues with your children to be firm and loving. It is not easy. Children will disappoint but we cannot stop loving them and guiding them in the ways of the Lord. We disobey our heavenly Father on a constant basis, but as His children, He still loves us and disciplines us for our own good. Understanding that model is essential for good parenting and is essential when it comes to the vertical relationship with God.