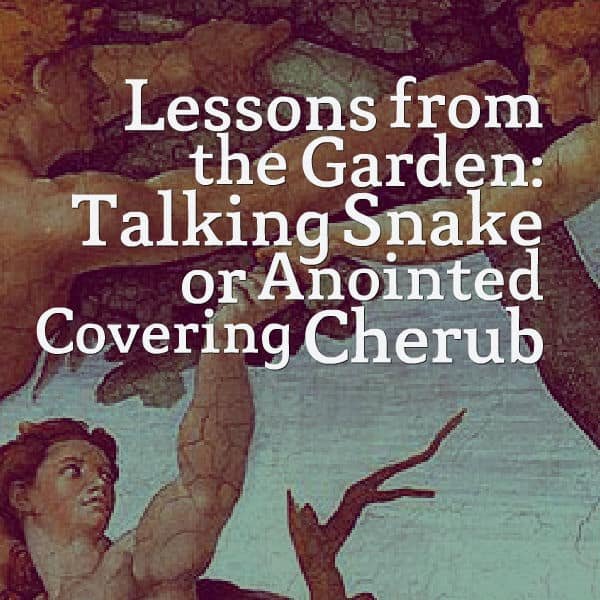 Lessons from the Garden: Talking Snake or Anointed Covering Cherub?

There is one specific element of Genesis 3 that has recently fascinated me and that is the question as to why Eve is not portrayed as being surprised when the “Serpent” spoke to her. One of the traditional views can be found in the artwork that is often used to depict the conversation between Eve and the “Serpent”. Normally, the “Serpent” is shown as a conniving snake, wrapped about the Tree of the Knowledge of Good and Evil, hissing with a forked tongue the lies and manipulative words that led to Eve partaking of the forbidden tree. Such a presentation never sat well with me to be honest. It made about as much sense as the depictions of Noah’s Ark as some sort of bathtub toy with giraffes sticking their head out what appears to be a chimney.

So if the conversation was not with an actual hissing snake or even what some have suggested as being a snake that was possessed by the Enemy, who or what was Eve actually conversing with in the Garden? For that matter, can we even know and why would it even matter? The answer to the latter questions is we can know and it does matter. I am of the firm opinion that every detail of Scripture is provided for a reason and if we dig into Scripture diligently, the answers are there.

There are a couple key foundational issues to consider when attempting to identify who or what Eve was speaking with on that fateful day. One is the Garden of Eden itself. The normal idea of the Garden of Eden was it was an idyllic paradise where God planted Adam and Eve and the animal kingdom and a place where He came down from the heavens to visit each day. In fact, matters regarding the angelic host are often ignored when considering something like the Garden of Eden. This leaves us with a rather incomplete and incorrect perspective on the Garden and most importantly, why this place was so idyllic and what was taking place there in the beginning.

Let’s address this important issue first before examining who or what Eve was speaking with as the picture will become clearer once the reality of Eden is noted and better understood. Eden was far more than just a little spot on the newly created planet Earth where God dropped off Adam and Eve and the animal kingdom, only to stop in for a daily visit. We find in Scripture a much different description attributing Eden as the center of God’s activity. What is interesting is the description we find concerning Eden also informs us on who or what Eve was conversing with – a two for one special.

The most informative Scripture is that of Ezekiel 28:12b-15:

“You were the seal of perfection, Full of wisdom and perfect in beauty.
You were in Eden, the garden of God; every precious stone was your covering: The sardius, topaz, and diamond, beryl, onyx, and jasper, sapphire, turquoise, and emerald with gold. The workmanship of your timbrels and pipes was prepared for you on the day you were created.
“You were the anointed cherub who covers; I established you; You were on the holy mountain of God; You walked back and forth in the midst of fiery stones. You were perfect in your ways from the day you were created, Till iniquity was found in you.”

We will return to this passage when we examine the Serpent; however, for the time being, there are some important items to note from the above passage. The first is the description of the Garden of Eden. We find a description of it being the Garden of God and the holy mountain of God. Such descriptions are significant when attempting to ascertain what was taking place in the Garden of Eden in the beginning. Concepts of mountains and gardens being an abode of the gods was well known in the Ancient Near East (ANE). Dr. Michael Heiser, in his fascinating book The Unseen Realm saliently notes the following:

“Eden can only be properly understood in light of the worldview the biblical writers shared with other people of the ancient Near East. Like Israel, the people of ancient Egypt and Mesopotamia, for example, also believed in an unseen spiritual world that was governed by a divine council. The divine abode of gods – the places where they lived and where they met for governing the affairs of the human world – were portrayed in several ways. Two of the most common were gardens and mountains. Eden is described as both in the Old Testament…An ancient Israelite would have thought of Eden as the dwelling of God and the place from which God and his council direct the affairs of humanity.”[1]

We must not fail to recognize the situation that took place in Eden in the beginning. God dwelt with man and something else important for this study is the created angelic realm also had set up shop if you will in the Garden. This was a place where the “heavenly” realm as it is often described and the physical realm were united. There was no sin or separation between God and His creation. As noted by Dr. Heiser, Eden was the place from which God ruled and reigned as sovereign Creator, giving of course the assignment to the remainder of His creation to have dominion over what He had given them authority over.

This has significant meaning for how we are to approach the “Serpent”, in particular in how we determine who this being was and why Eve is not depicted as being surprised when this being conversed with her. When the approach is taken that God, the angelic realm, and man communed and communicated with one another in the Garden, things begin to fall into place. Furthermore, we see this same reality taking place in eternity future as noted in Revelation and other instances in Scripture that speak of what things will be like when God restores creation, relationships, and when God once again physical dwells with His people in the new heavens and new earth.

Since the Garden of Eden was the location from where God operated and since there was no veil at that time between the “heavenly” and the “earthly”, we can then move to assessing the issue of the conversation between the “Serpent” and Eve. Returning to Ezekiel 28, we see a clear picture and description of an angelic being. This was no ordinary angelic being; however, as evidenced by how this being is described by God. This particular being was created by God to serve Him and to perform a specific purpose, one perhaps that is often overlooked and that very much impacts how we understand what was taking place in Genesis 3. That purpose is one of covering. This cherub, this “right hand angel of God” so to speak, was created by God to cover.

What does this idea of covering mean? The Hebrew word translated as covering is cakak. It connotes the idea of something that is woven along the lines of fine woven fabric. Cakak also has the meaning of protecting or giving cover to something. This means the angelic being spoken of in Ezekiel 28 was given the role by God of providing protection and giving cover to something. What that something is perhaps is speculation, but let’s speculate based on the information we have in Scripture. This being is stated to have been in the Garden of Eden and it was his pride that ultimately was his downfall. What created being has this description throughout Scripture? Our long-standing enemy known as Satan, Lucifer, the Devil, etc.

This being served in the throne room of God as evidenced by the statement in Ezekiel 28:15, that of “You walked back and forth in the midst of fiery stones”. Fiery stones is another word picture of where the abode of God was located as evidenced by the many times fire is associated with where God is present. Looking back to our discussion of the Garden of Eden, this means this being, the “Serpent” served God and provided a covering for what God had created. We can make the assumption then that he swelled with pride and rebelled against God perhaps for the purpose of desiring the creation to worship him instead of God.

The idea of a talking snake or a possessed snake is quite frankly nothing more than the wild imagination of artists and those who have not made the necessary connections we have explored. This “Serpent” in the Garden was the anointed covering cherub, the one whose pride resulted in rebellion against God and the desire to destroy what God had created by deceiving Adam and Eve. The aptly named “Serpent” is the nachash, the “light-bearer” (Is. 14:12) who attempted to usurp his God given role and authority. As noted in Isaiah 14:15, instead of rising to replace God, he was instead “brought down to Sheol, to the lowest depths of the Pit.” He was cast down to the dust, the very thing man walks upon.

Talking snake or covering cherub who served God in the Garden of Eden and a being Adam and Eve knew and likely conversed with who attempted to destroy what God had created? The choice based on the biblical evidence is clearly the latter. Yet another valuable lesson learned from the Garden.