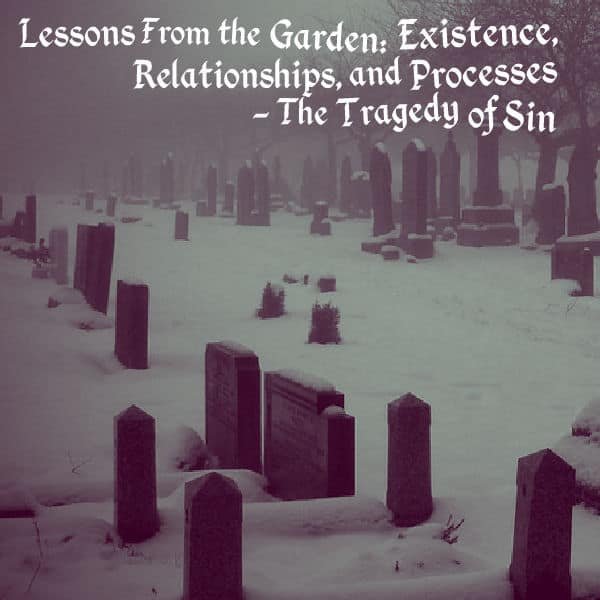 Something happened in Genesis 3 that shifted the course of history and impacted the entire universe. It seemed like such an innocent or unimportant action as after all, what is the big deal with eating something? We all need to eat right? Shouldn’t we as humans be able to decide for ourselves our own actions and what we believe to be right and wrong, or if there is even such a thing?

Such a series of questions is potentially what was going through the minds of Adam and Eve as they pondered the tempting words of Satan that fateful day in the Garden. Whatever type of food grew on the Tree of Knowledge of Good and Evil was being talked up with God’s command to not partake of that tree being questioned. Adam and Eve both gave in to the lure and the lies of the enemy, thus disobeying God’s singular and clear command of “Do not eat”. As a covenant, God’s command to Adam and Eve had two consequences attached to it – “Do not eat and you will live” and “Eat and dying you shall die.”

Disobedience to God’s commands is noted throughout Scripture as sin. Thus, the actions of Adam and Eve in disobeying God was a sin. The result of their sinful deed thrust the entire created order into disarray just as God had declared it would if they disobeyed His command.

As we continue to examine the threefold issue of existence, relationships, and processes, we have moved from a state of perfection to a place where sin has impacted the entire construct of the universe. Our current existence is perfectly described in Romans 8:22 which states, “For we know that the whole creation groans and suffers the pains of childbirth together until now.” Why does it groan? It groans under the weight and impact of the consequences of sin.

God made a covenant with Adam in the Garden – do not eat of the tree and you will live; eat of the tree and dying you shall die. In breaking the terms of that agreement by sinning against God’s command, Adam introduced a drastic change to humanity’s existence. No longer would man live in perfect harmony with nature and his fellow man.

In sinning, Adam and Eve were removed from the Garden and from the physical presence of their Creator. Instead of tending to a lush Garden and having dominion over creation, thorns, and thistles, now enmity exists not only between man and his fellow man but also man and creation. The travails of childbirth were the new norm. Furthermore, our existence now included a constant battle between the seed of Satan and the seed of the woman, a constant struggle against not only the daily battle to survive physically but also spiritually. Our very existence post-sin experienced a dramatic shift from a place of perfection to the groaning we now see all around us.

This alteration of our existence post-sin also has a massive impact on relationships. As we noted above, man was removed from the Garden and from the physical presence of God. Sin impacts our relationship with God. He is holy and unholiness cannot enter His presence.

We fight the constant battle of the lure of the flesh versus obedience to God’s commands for righteous living. Our hearts chase after evil rather than being in passionate love with our Creator. We have a broken relationship with our God that needs mending. Sin also impacts our relationship with our fellow human beings. God gave us His commands so that we might understand what it means to love God and others. When we watch the evening news, it is evident that man’s relationship with his fellow man is marred by murder, lust, envy, jealousy, rage, theft, adultery with these being the tip of the iceberg. Our relationships with others are broken and need mending.

Finally, we come to the issue of processes. Earlier I mentioned the aspect of God’s covenant with Adam that if he disobeyed God’s command, dying he would die. Sin introduced the process of death and decay. The Hebrew verb construct in Genesis 2:17 speaks of the process of dying that will assuredly result in the finality of death at a future point. In the Garden, the process was one of life without death and decay. Post-sin, what we know and experience all around us is a much different reality. The processes of life need mending.

If this seems like somewhat of a depressing post let me assure you that this is exactly the point. Understanding the past reality of perfection in the Garden is critical to having a proper view of the present reality of a universe that is marred by the impact of sin. This allows us to grasp what the promise of redemption and restoration is all about. Moreover, if we do not understand what we are redeemed from and why we need to be restored, including what that redemption and restoration will look like, we are in danger of missing the entire flow of the biblical message.

I noted that our existence, relationships and the process of life need mending. God promised in Genesis 3:15 that One would come to deal with Satan so that this mess we now endure would be fixed. The One who came is Jesus our Messiah. He is our Redeemer.

In the next and final post in this series, we will take a look at what this redemption is all about and how our existence, relationships, and the processes of life will be mended forevermore through the person and finished work of Jesus