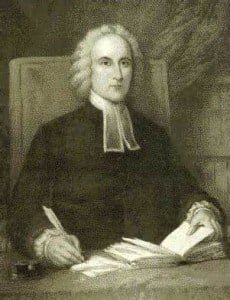 I try not to put much stock in buzzwords. They often become part of my vocabulary, but I try always to remember their limits. In recent years “missional” has become one of those buzzwords I use. The word has a dozen different meanings, but it frequently finds a place in discussions about Christian social justice. To be “missional” can often mean to reflect God’s heart for the poor and oppressed. In this sense, then, the idea of missional Christianity is not new. The 17th Century Puritan theologian, Jonathan Edwards was a missional Christian long before the term became buzzworthy.

It will strike some as strange to suggest that Edwards was missional, particularly in the sense that I am here using the word. Edwards, however, believed that every Christian was “disposed to be public-spirited.” In his most missional work Charity and its Fruits, Edwards wrote:

Edwards was a missional theologian. He saw the necessity of a gospel-empowered social concern. There was, for him, a direct correlation between being a Christian and caring for the poor. Tim Keller notes of Edwards that “He saw involvement with the poor and classic Biblical doctrine as indissolubly intertwined” (Generous Justice, xiii). Edwards’ missional focus can be seen in two particular ways in his work: (1) a real concern for the poor, and (2) a greater concern for the glory of God.

Concern for the Poor

Care for the poor was more than just an abstract idea for Edwards. He saw the need of it within his own community. Tim Keller describes the socioeconomic problems that were evident in Northampton by 1730. There was not much available land for newcomers to the town, and as a result, many could not secure any sort of economic stability. As their debts grew, the frustrations of the collectors and the coldness of the long-term residents did too (68). Edwards watched this unfold and keenly observed more than just socioeconomic problems, he observed spiritual problems. When Edwards preached his 1733 sermon “The Duty of Charity to the Poor,” he confronted the common objections that the townspeople employed for refusing to care for the poor. It is his pattern in this sermon to compel right action from gospel conviction. He regularly corrects their sinful justifications using the “rule of the gospel.” Responding to the objection that some are “very ill-tempered” and “of an ungrateful spirit” Edwards says:

Christ loved us, and was kind to us, and was willing to relieve us, though we were very hateful persons, of an evil disposition, not deserving of any good…so we should be willing to be kind to those who are…very undeserving. (Quoted in Keller, 71)

The gospel-informed Edwards’ view of social care. We help those who can’t help themselves because that’s what Christ has done for us. We help those who have no advocates because Christ became our Advocate when we had none. We love without strings or limits; we love without thought to self because that’s the model of sacrificial love Christ gave to us.

It’s important that readers not confuse Edwards’ thoughts on charity with our own modern usage of the word. “Charity” in his writings does not simply mean hand-outs. He has a more full-orbed picture of justice in mind. Edwards believed that economic stability and social standing were gifts from God, and as such were to be used in the service of others. Edwards’ public theology included far more than “charity” as we understand it today. He sought the eradication of poverty.

Furthermore, he sought to alter the social structures that continued the oppression of the needy. Keller notes that in his sermon “Dishonesty: or the Sin of Theft and Injustice” he rebuked those who “took advantage of the market conditions to gain exorbitant profits at the expense of the poor” (205, n.65). Charity was part of a larger picture of social justice.

Edwards developed his public theology from a combination of his philosophy of being and his theology of love. Our mutual participation in universal being creates a “shared aesthetic perception – an appreciation of many sorts of physical and spiritual beauty.” Michael McClymond and Gerald McDermott summarize Edwards’ conclusion when they write:

On the basis of this multiplicity of shared experiences, Edwards laid a foundation for a common moral philosophy. Every human being, he wrote, is a part of universal being. Each one therefore is obligated to acknowledge his or her place within this structure of being and to give “cordial consent” to it by seeking its highest good. (The Theology of Jonathan Edwards, 514)

As part of universal being all people had common moral grounds upon which to develop a social conscience. The Christian, however, was particularly called to love. Love to the poor was a sign of love for God and a marker of genuine religious experience. In Religious Affections Edwards unpacks these two ideas, concluding ultimately that “none are true saints, but those whose true character it is, that they are of a disposition to pity and relieve their fellow creatures, that are poor, indigent and afflicted” (WJE 2:356). The grace of God changed a person’s conduct towards his neighbor. Grace received should result in grace extended. The gospel compelled missional living for Jonathan Edwards.

Concern for the Glory of God

If there could be an instinct or other cause determining a person to benevolence towards the whole world of mankind…exclusive of…love to God…[and] supreme regard to him…it cannot be of the nature of true virtue. (God’s Passion for His Glory, 108)

True virtue is bigger than just care for the poor. True virtue cares for the poor as part of a greater goal to communicate the glory of God. As Edwards saw it, concern limited to one’s culture is simply too small a thing. If we don’t make the glory of God our ultimate goal, we will ultimately be far more selfish than missional. We are an idolatrous people, and our greatest idol is self. We will use any occasion to worship ourselves, even making our family, our city, our world, an extension of ourselves. Detached from an all-out pursuit for God’s glory our best efforts to be missional will culminate in making much of ourselves. Edwards believed in the necessity and importance of social change, but only as part of a larger agenda: to see God’s glory on display in all the world. Or, to say it like Piper has for years, to spread a passion for the supremacy of God in all things for the joy of all peoples.

This second piece of Edwards’ missional theology needs to be recovered by many contemporary Christians. There is a renewed passion today for social justice, redeeming culture, and transformational theology, but the same zeal for the glory of God is often lacking. Speaking from my own church experience, many in one young congregation I served were at times far more passionate about social change than spiritual change. Many had a greater passion for caring for the needy than for pointing them to the gospel. Both are necessary; both are what make churches and Christians truly missional.

Long before it was cool to be missional, Jonathan Edwards had a burden for Christian social care. His burden was informed, however, by a greater concern for the glory of God. Such a model of missional engagement is needed today.