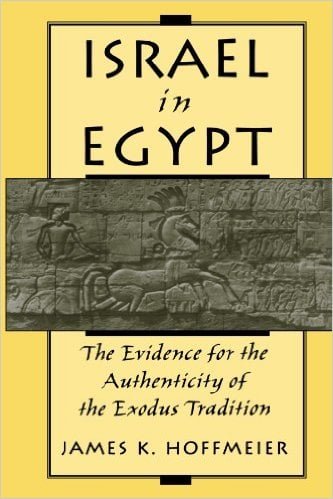 Israel in Egypt: The Evidence for the Authenticity of the Exodus Tradition 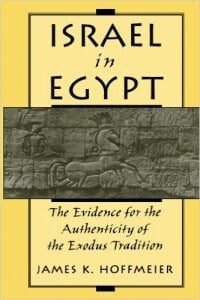 The Bible relates real history. With that said, there are always efforts by those who seek to discredit Scripture as well as those within liberal elements of biblical scholarship to claim that the historical record reveals something other than what is recorded in the Bible. One such historical element that has come into question is sojourn and slavery of Israel in Egypt. Dr. James Hoffmeier in his book Israel in Egypt: The Evidence for the Authenticity of the Exodus Tradition examines the scholarly debate and what ends up being a plethora of historical evidence that supports the Biblical record.

Some may wonder why the pursuit of historical proof for the Exodus tradition is so important. After all, even if some of the facts noted in Scripture are said to have no observable historical support, the theological principle of God delivering His people from bondage, albeit not actual physical bondage, still remains factual, right? The answer to that question would be a resounding no. Furthermore, as noted by Hoffmeier, “For centuries the Israelite exodus from Egypt has been considered to be a historical event central to the formation of ancient Israel as a nation and its faith.” Historical accuracy, meaning demonstrating an actual period of enslavement followed by an actual departure from that bondage by the hand of God, is clearly an issue of great importance.

Hoffmeier first examines the various theories that have been presented by scholars in relation to the exodus tradition. He reveals the creeping in of skepticism among scholars, in particular liberal scholars who attempted to point to a lack of historical and archaeological evidence to support the biblical record. Hoffmeier then takes a look at the various perspectives on the origins of Israel as a nation, in particular that of the conquering of Canaan, given the taking of the Promised Land is of course connected to Israel departing Egypt. I most appreciated Hoffmeier’s simple yet profound statement that “When Joshua is viewed as a piece of Near Eastern military writing, and its literary character is properly understood, the idea of a group of tribes coming to Canaan, using some military force, partially taking a number of cities and areas over a period of twenty years, destroying (or burning) just three cities, and coexisting alongside the Canaanites and other ethnic groups for a period of time before the beginnings of the monarchy, does not require blind faith.”

Perhaps the most interesting section of this book is Hoffmeier’s examination of the historical evidence for Semitic peoples existing in Egypt during the time of the Exodus. If proof can be provided that people of Semitic origins lived in Egypt during the time Israel was believed to have been enslaved, the assertions that the exodus tradition is full of holes itself begins to fall apart. Hoffmeier explores a number of key historical records that time and again support the biblical account. The archaeological evidence is abundant and convincing, leaving little room for further doubt to be cast on the validity of the biblical record or the reality that the people of Israel spent time in slavery in Egypt.

The Joseph narratives have come under scrutiny over the years and in recognition of the importance of addressing the issue of Joseph, Hoffmeier spends some time looking at the evidence for a Joseph figure in Egyptian history that matches the individual noted in the closing chapters of Genesis. Keys exist in the biblical record that allude to the historical facticity of issues such as Joseph being sold into slavery. Hoffmeier notes that the sales price of twenty skekels was indeed the average price for a slave during that period. Other elements of the Genesis account such as the mention of magicians interpreting dreams and the rise of Joseph to serve as vizier, do have a basis in accepted historical fact. While there does not seem to be a historical document or archaeological treasure that at this point makes an undeniable connection between Joseph and a figure of Egyptian history, nothing yet discovered brings sufficient questions to light to deny such a connection exists either. Hoffmeier does a great job of outlining and investigating these issues.

Of course no figure in the exodus tradition is as important as that of Moses. The story of Moses as a baby being taken in by the daughter of Pharaoh, raised in Pharaoh, and then running off essentially into hiding before being called by God to lead Israel from bondage is well-known by most. But what if any historical proof exists for this Moses figure? Just as important, is there evidence for a mass exodus of people and/or slaves from Egypt during this period that would confirm the exodus tradition? Questions of historical individuals and matters of geography have long been debated by scholars and Hoffmeier, as he did with the other important topics regarding the exodus tradition, examines in great detail the scholarly discussions. The information is quite interesting and while some have continued to choose to argue against Moses being a real figure or anything noted in the biblical record as being possible historical fact, the evidence clearly points to the reality that the Bible can be shown to be accurate on all counts.

Hoffmeier concludes his book by noting the weight of the evidence presented makes it seem rather “premature to dismiss the biblical traditions of Israel’s birth as a nation in Egypt, an event still commemorated annually by Jews when Passover is observed.”

This is a book that I can highly recommend. It is replete with interesting information, Hoffmeier examines the arguments for and against the exodus tradition, and brings to bear his expertise in the area of Ancient Near Eastern studies on this important issue. The result is quite clear: God’s Word is proven to be trustworthy.

I received this book for free from Oxford University Press and the opinions I have expressed are my own. I am disclosing this in accordance with the Federal Trade Commission’s 16 CFR, Part 255 : “Guides Concerning the Use of Endorsements and Testimonials in Advertising.”