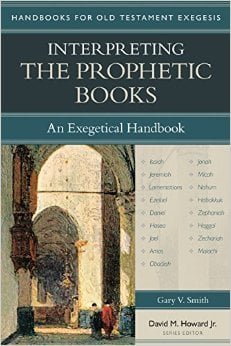 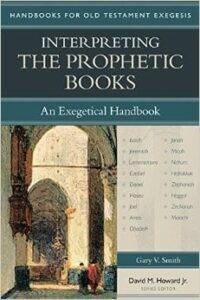 Reading and understanding the prophetic books of the Old Testament can be a challenge for even for the most seasoned theologian. Matters of context, the unpacking of symbolism, and even whether the prophecies are only for the original hearers or how they impact us today or in the future, often create the greatest amount of difficulty for those engaging these texts. Unfortunately, such issues result in either many avoiding these books of the Bible altogether or even worse, incorrectly unpacking their important and timeless message. Gary Smith in his contribution to the Handbooks for Old Testament Exegesis Series called Interpreting the Prophetic Books, seeks to alleviate many of the common issues and misunderstandings.

Smith notes in the preface to this helpful book, “I do not believe that preaching or teaching from the prophetic books is easy, but it is rewarding because in the prophetic messages we come to understand the will of God for his people and God’s future plans for his people.” In order to properly understand the message of any book in Scripture, in particular something as difficult to grasp as the prophetic books, a discussion of the genre of prophecy must be first on the agenda and Smith spends chapter one unpacking the nature of prophetic literature. Topics such as the poetry of the prophetic books to include matters of symbolism and parallelism are lucidly noted as well as engaging imagery and figures of speech.

Building on this important foundation, he then explores the major themes of each of the prophetic books to give the reader an overview of the message contained in these books. One would expect from this point for Smith to begin examining each individual book; however, that is not the tact he takes. Instead of going into each book separately, he continues his exploration of the prophetic books by tackling some very important and overarching elements of exegesis of these texts. In the process, he assesses how best to exegete these books.

For example, understanding the historical setting of the prophetic books is an absolute must. Many times, this is an issue that is often overlooked as we forget who it was the prophets were actually speaking to and during what period of the history of Israel and Judah they ministered. As Smith saliently notes, “Each prophetic message was impacted by what was happening in the life of the prophet and his audience. Both the prophet and his audience were tied to the political, social, and religious setting of their time.” Before even beginning to exegete the text, the matter of historical setting must be understood and Smith does an excellent job of explaining the setting of each prophetic book.

Smith does not forget the actual text as he spends the last half of the book walking the reader on how to approach interpretive issues in each book, how to read the text, developing an exegetical outline, determining the main idea, and finally and perhaps most importantly, dealing with how to apply the text. It is this application piece that can be the hardest but the excellent foundation Smith provides in the front of the book will greatly help the reader understand the methods for application he presents.

As if all that did not make this an excellent book already, Smith provides at varying points recommended tools such as useful commentaries and computer resources that will assuredly help the reader even further as they engage the prophetic books.

I highly recommend this book for all believers as the discussion and material provided by Gary Smith will greatly enhance the reader’s appreciation for and understanding of the prophetic books of the Old Testament. His approach is scholarly yet highly understandable, lucid, beneficial, biblically accurate, and worthwhile for even the most seasoned theologian.

This book is available for purchase from Kregel Academic by clicking here.

I received this book for free from Kregel Academic for this review. I was not required to write a positive review. The opinions I have expressed are my own. I am disclosing this in accordance with the Federal Trade Commission’s 16 CFR, Part 255: “Guides Concerning the Use of Endorsements and Testimonials in Advertising.”