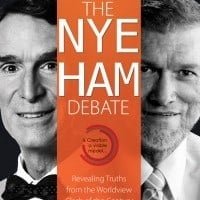 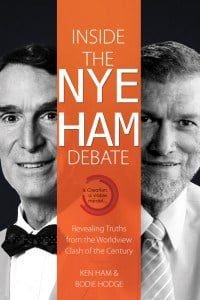 2014 brought quite an interesting and entertaining event to the creation vs. evolution discussion, namely the debate between Bill Nye of Bill Nye The Science Guy fame and Ken Ham, founder and CEO of Answers in Genesis. This debate was broadcast live on the internet and the Creation Museum was host to a packed auditorium. News media from all over the United States and the world were in attendance. Both those of the creationist and evolutionary belief systems were present for this debate.

The complete video of the debate continues to be available for all to watch on YouTube and other websites. In an effort to provide background on how the debate came to be as well as a complete transcript of the comments made by Bill Nye and Ken Ham, Bodie Hodge has provided a play by play type book called Inside the Nye Ham Debate: Revealing Truths from the Worldview Clash of the Century.

The specific topic of discussion for this debate was whether creation is a viable scientific model. Nye and Ham both presented their perspective on that question. In this book, Hodge provides an intimate look at what transpired to include a valuable commentary on each element of the debate as well as both debater’s responses. Furthermore, Hodge asked Ken Ham to “go carefully through the book and add in his own insights, personal thoughts, and other information that would make this a unique appraisal of the debate.”

While Hodge is clearly of the creationist persuasion, works at Answers in Genesis and is the son-in-law of Ken Ham, Hodge interacts not only with Nye’s various points and rebuttals, he also provides comments on Ham’s points and rebuttals. With that said, the majority focus of Hodge’s interaction is on what Bill Nye presented throughout the debate. Hodge correctly notes his personal bias concerning this subject, noting that “If someone believes they are not biased, then part of their bias is that they have deceived themselves into thinking they are not biased.” I found Hodges’ comments to be fair and focused on analyzing the validity of Nye and Ham’s comments and responses to each other’s positions.

I highly recommend this book for anyone wanting a more in-depth analysis of this momentous and important debate between Bill Nye and Ken Ham. This truly was an interaction of two diametrically opposing worldviews, one that supports a godless agenda, and one that looks to Scripture for truth. While the winner of this debate is subject to debate, the important and lasting result is the attention given to the biblical creationist position and the reality that it is a viable scientific model. While Nye may certainly be a more polished speaker and debater, his comments are smashed against the strong foundation of God’s Word. To that end, Ham represented biblical creationism quite well and Hodge does an excellent job of interacting with the debate in a way that truly sheds additional light on the points made, their overall importance, and why we must stand firm on the truth of Scripture in response to those who seek to denigrate God’s Word.

This book is available for purchase from Master Books by clicking here.