If Jesus Wept, We Can Too

Quickly after becoming a Christian, I developed my theology of suffering. I had all the answers to the hard questions of life (or so I thought) and thought surely those answers would be all I needed to face any kind of suffering headed my way. With Romans 8:28 written on my eyelids, I clung to the promise that God was working all things for my good as I faced poverty, job loss, a broken engagement and many other trials.

But something happened when raw, dark grief caused by recurrent miscarriage entered my life a few years later. Though Romans 8:28 brought comfort that even the deepest of losses would be turned for good, it didn’t bring immediate relief to my broken heart. I still ached deeply for the babies who had left my womb too soon. My theology of suffering began to grow legs and move from my head to my heart. Suddenly, the answer to suffering wasn’t a promise that everything would work out—it was a person. It was Jesus. And to find him, I had to go to the dark places of my pain and face them head-on. I had to call out to the God who is sovereign over loss. I had to learn the dance of lament.

I’ve found the church to be generally uncomfortable with suffering. It’s where the “at least’s” emerge from. “At least you don’t have cancer.” “At least you can get pregnant.” “At least it was an early miscarriage.” We want to cover up the sadness—place a bandaid on the wound and move on. Leave a casserole at the door and rush back to our car, where we’re safe from the riskiness of weeping with those who weep. That’s if we take a meal at all. For some, even that is too close for comfort. Stepping into someone’s grief opens us up to being grieved, and we’d rather not surrender ourselves to such pain.

In a Christian culture like this, where is the room for biblical lament? Can a believer weep over his chronic illness? Is there space for the weeping mother who lost her unborn baby? What about the couple who experiences multiple failed adoptions?

Our discomfort with lament forces these people to feel the need to fake a smile as pain grips their hearts.

The idea of lamenting isn’t something most of us are familiar with. Lament isn’t an excuse to complain about the circumstances God has allowed in our life. Rather, it’s a tool to draw us closer to God as we walk through trials. Often when faced with something hard, we keep our distance instead of drawing near to the Lord in our sadness.

Discontentment of our circumstances is condemned in the Bible. But grief over suffering is not the same thing. In our attempt to forsake complaining, many Christians hold back from bringing their whole heart to the Lord. Lament lays us bare before God. In our lamenting, we have drawn near to the only One who can heal us. This is a good and holy thing.

The times where God has comforted me most were when I bowed before him in a prayer of lament, begging for mercy. Oh, how I wouldn’t trade the experience of Jesus meeting me in my grief for anything.

When tragedy and trials enter our lives, we should feel free to weep over the sorrow they bring. We are free to beg God for mercy yet submit to his will. We’re encouraged even, to bring our broken hearts to God. A list of the numerous Psalms and biblical books to prove the Bible leaves room for lament is not needed here.

At many churches, the call for authenticity goes out, but I’m not sure we’ve been equipped to rightly handle our own grief or the grief of others.

Instead of listening to a sufferer, we slap a Bible verse on their pain and expect it to heal them immediately. When a prayer of lament is offered from a grief-stricken brother or sister, we feel uncomfortable with their honesty and question their theology. As we watch tears fill their eyes again, we wonder if they’re just too downtrodden—maybe they’re not as mature as other believers who tend to hide their problems. Surely it’s the mature Christian who holds within their heart deep pain, yet keeps it back for fear of looking weak before others. But wait…where does this leave Jesus, the Son of God, who wept?

Even when we speak of Jesus, we rarely spend much time focusing on how grieved he was at various times throughout his ministry. He was given the name “Man of Sorrows,” but we’d rather focus on other aspects of his life.

Let’s take a second to ponder a couple of instances where Jesus wept.

When Jesus saw her weeping, and the Jews who had come with her also weeping, he was deeply moved in his spirit and greatly troubled. And he said, “Where have you laid him?” They said to him, “Lord, come and see.” Jesus wept. (John 11:33-35 ESV)

Many commentators have speculated about why tears fell from the eyes of the Savior here. Was he sad over the consequences of living in a world tainted by sin and the pain it causes? Was he heartbroken over the death of his friend? It’s highly possible that both are true. Jesus knew he would raise Lazarus from the dead moments later, but at that moment, the grief of death brings overtook him.

Jesus Wept Over the Cross

Then he said to them, “My soul is very sorrowful, even to death; remain here, and watch with me.” And going a little farther he fell on his face and prayed, saying, “My Father, if it be possible, let this cup pass from me; nevertheless, not as I will, but as you will.” (Matthew 26:38-39 ESV)

In the days of his flesh, Jesus offered up prayers and supplications, with loud cries and tears, to him who was able to save him from death, and he was heard because of his reverence. (Hebrews 5:7 ESV)

“He was heard because of his reverence.” It seems that Jesus’ prayer in the garden of Gethsemane didn’t show reverence for the Father simply because he submitted to his will. It was also displayed through his offering of a lament to the only one who could save him from the suffering he was about to endure.

In both the case of Lazarus and the cross, Jesus knew the end to the story. He knew joy was on the other side. But he still wept. He still cried out to the Father. He still felt the pain of suffering. Just because you and I know that good will come from our suffering—that God’s will is best, the hardness and pain of suffering isn’t lessened. And it’s okay to say that. Jesus is sympathetic to the sufferer, for he knows how it feels to be deeply grieved (Isaiah 53:3).

Our Savior was named the “Man of Sorrows” for a reason. He was acquainted with grief, and keenly understands how we feel when we face suffering in our lives. Let us run to Him with our pain. Let us pour out our hearts to him. It’s there where we find mercy and help in our time of need.

He wept, and we can too. 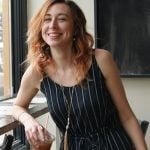 Brittany is a follower of Christ, wife to James and Momma to three in Heaven. She exists to bring God glory and prays her writing is an avenue for that. She longs to help other women see Jesus as their ultimate Treasure. Find her writing on her Brittany Blog