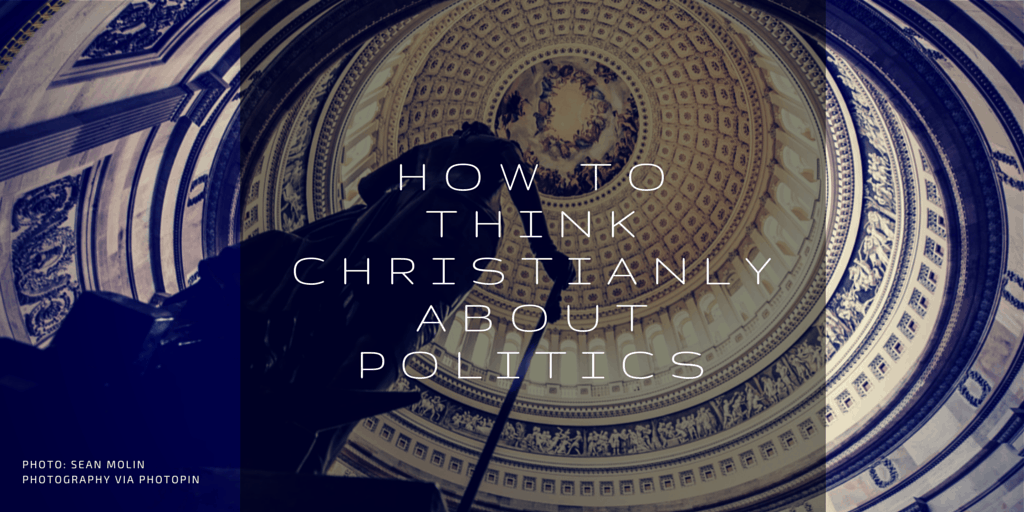 How to think Christianly about politics 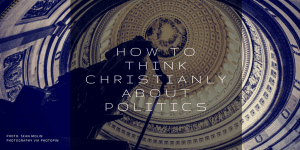 As a Canadian, I find American politics intriguing. The way Americans engage—regardless of their views—is astonishing, and somewhat refreshing. Every time I see it, I’m reminded of how different not only our governments are1 but also how different we are as people.

By and large, Canadians don’t care about politics the way Americans do, certainly not to the same extent at any rate. So the debate on, say, the most recent State of the Union address, would likely never happen here.

We are, for the most part, a politically apathetic people. And if we’re not careful, for our culturally-induced political apathy can quickly seep into our faith, as well.

But as Christians, this should never be. In fact, we should care deeply about politics.

By this, I don’t mean the old stereotype of marrying the Christian faith and political activism, seeking cultural transformation through legislation, as the Religious Right and Moral Majority have often been accused of. Instead, we need to think about politics Christianly–that is, in light of three realities: the source of government, our identity, and our obligation to society.

1. The source of government: God. God establishes all governments. He is their source, existing only at his good pleasure. They are his instruments, existing for our good, and requiring our prayers (even if their leaders’ values do not align with our own). Their laws are to be obeyed willingly and in good conscience insofar as they are not in conflict with the commands of God (see Romans 13:1-8; Acts 5:29).

2. Our identity: Ambassadors of Christ. In Christ, all Christians are citizens of the kingdom of God. Thus, our primary allegiance does not belong to an earthly nation but to the Lord Jesus. God has also determined the times and places in which we live. As such, we serve as ambassadors for Christ in those nations (2 Corinthians 5:20), with the local church functionally serving as embassies of the kingdom.

3. Our obligation: to point others to Jesus. As Christ’s ambassadors, God has charged us to point the lost and perishing to Jesus Christ. We are ministers of reconciliation, through whom God makes his appeal. We are to be salt and light in the world, letting our deeds cause others to give God praise.

Seen in this light, how should we think about political engagement?

I would suggest that it is an extension of our role as Christ’s ambassadors, and of the command to love God and our neighbors (Matthew 22:37-40). Thus, we cannot be “apolitical,” at least not in the way some may wish to be. While we are not all compelled to participate in the political process to the same degree, we all would be wise to participate. But to the degree to which we choose to participate, we have the opportunity to speak truth with conviction and compassion into situations where we might not otherwise.

We can show the lost the values of God’s kingdom in action, provided we stand by our convictions. And even when we “lose” temporally, we can be confident knowing that our loss is only temporary—and in doing so, we get to show that our hope for a better world comes not from politics, but from the promised return of Jesus, when he will usher in his kingdom in its fullness.

So, Christian, what do you think: should we care about politics?

This post first appeared at Aaron’s blog and is posted here with his permission.

Aaron Armstrong is the author of Awaiting a Savior and Contend. He is a writer, speaker, and stereotype Instagrammer. Aaron blogs daily at Blogging Theologically.