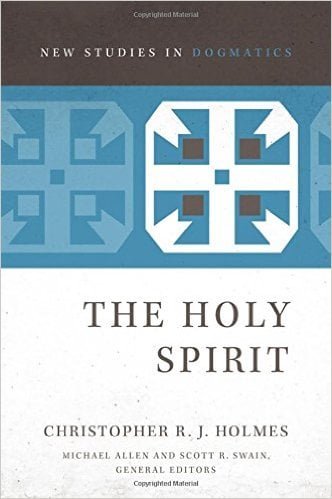 In the wide world of theological studies, one of the many joys we have is watching a highly-anticipated series being birthed and developing over time. Avid readers of theology will be pleased to know that Zondervan Academic has released the first installment of a very important and very insightful series entitled New Studies in Dogmatics, edited by Michael Allen and Scott R. Swain, two of Reformed academia’s leading scholars. The content of each book and goal of the series, according to Allen and Swain’s vision outlined in press releases, is fourfold:

The first volume released from this series centers on the person of the Holy Spirit, and is tasked with the presentation of this doctrine. Author and Professor Christopher R.J. Holmes does a fabulous job of achieving the goals of the series through this volume, evident in the structure and outline of the book. After a helpful introduction, Holmes engages this topic mainly through three lenses, each time highlighting a different theologian and his particular area of contribution to the pneumatological conversation, with much time spent in the Gospel of John.

There are a lot of high points in this book. One of my favorite components of it is how Holmes has digested the works of three of the most important thinkers in church history. Specifically he has zeroed in on how their thought should train us in our own understanding of the Holy Spirit.

Holmes does a great job of guiding the reader through avoiding potential mistakes these men made in their studies. To do this, he helps his readers reflect on the importance of growing in their understanding on this doctrine. For example, in the chapter “Heavenly Things,” part of his engagement with Augustine, Holmes helps us understand the careful distinctions that Augustine made between “being-language” and “subsistence language” (65), which is a paradigm-shifting idea.

Holmes is not afraid to show the differences between these three men, and further, why we should consider them. On page 145, Holmes suggests that while Thomas may not disagree with “Barth’s rule,” he probably would find it to be incomplete. This cross-examination style is helpful, especially because it allows us to easily connect the dots throughout centuries of church history.

One of the strongest elements of this book is how Holmes shows the importance of the Holy Spirit. Many may think that this is simply academic, cloud-level talk and doesn’t really get to the ground level, but Holmes, and I would argue otherwise. “Why the talk of who and how the Spirit is in God?” Holmes asks. “Because the New Testament encourages such talk” (163). Not only this, but as Holmes shows throughout, building a more exegetical and logical explanation of the Trinity helps us not reduce Him to “the forgotten Third Person of the Trinity,” keeping us on guard against heresies, such as Arianism, Modalism, and Tritheism. This is an important topic of discussion, and an important series that’s beginning to unfold. Don’t miss the significant conversations being had in New Studies in Dogmatics.