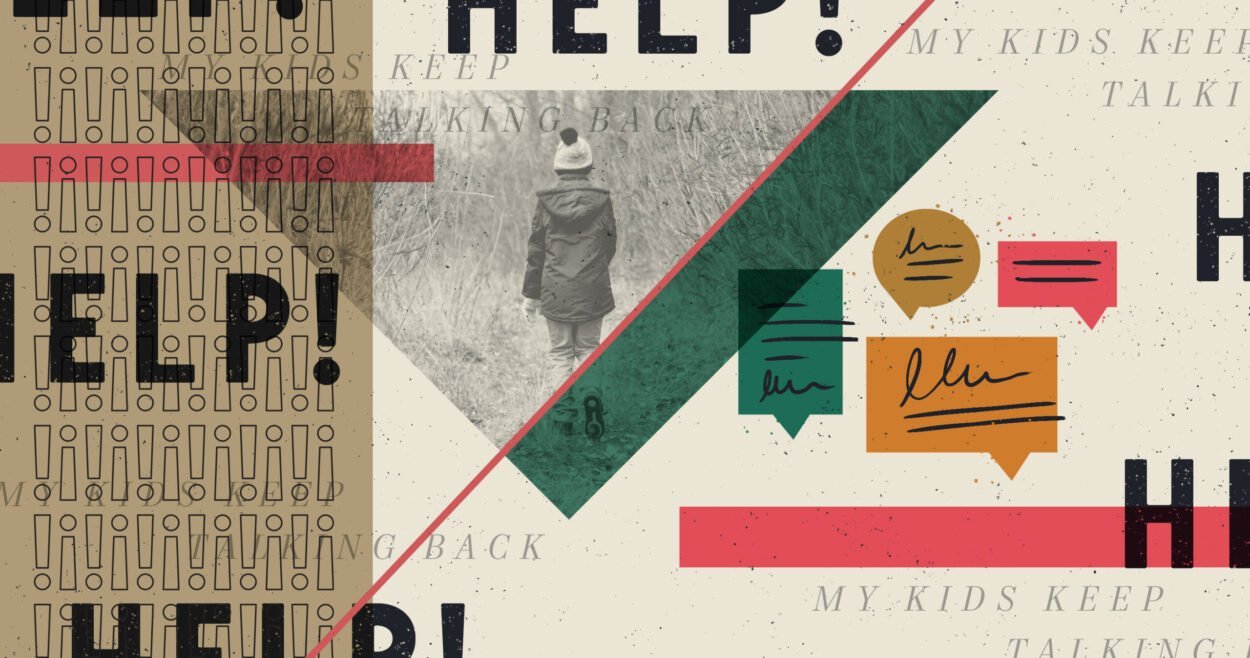 Help! My Kids Keep Talking Back

When Our Kids Talk Back

We’ve all been there. You tell your child to do something, or you try to help them see something about themselves or the larger world, and they respond immediately with some kind of verbal push back.

The underlying theme in talking back is that your child uses their words to reject yours—to shield themselves from you and from the influence you’re trying to have in their life.

But now the ball is back in your court. What do you do? Two things: 1) see the bigger picture for yourself, and 2) help your child see what they’re really doing.

Your child has a problem . . . but it’s not so much with you as it is with the one who put you into their life. By disrespecting you—let’s assume what you said wasn’t sinful or sinfully expressed—they’re disrespecting God, since he’s the one who told them to respect you (Ex. 20:12). Unless you see the issue from this larger perspective, you won’t be able to help your child with their real need.

This is not a license to use God’s commands to coerce your child into doing what you want. But it’s a plea that you would be more upset by the danger your child is in by rejecting your place in their life than by how their rejection makes you feel.

When you’re more concerned for your child than for their impact on you, then you’re in the right frame of mind to help them. How do you do that?

Don’t Be Surprised—We are born rejecting God and his ways, thinking that we can plot a better course for our lives than he can. In talking back to you, your child is simply expressing in one more concrete way what has always been true about their fallen nature.

Embrace God’s Wise Plan—God knew that your child would need help to deal with their fallenness, and out of all the people he could have chosen, he thought you would be the very best. He put your child into your family to accomplish his purposes in their life.

These are the same things that your child needs as well, but you can’t lead them to the help they need without first experiencing it yourself.

Be Moved with Pity—Your child is in danger of rejecting not just you but the Lord who created them for himself. What does that mean? They need to be rescued from what they’re doing (James 5:19–20). And God has granted you the privilege of being a first responder to them.

Think in terms of being on a rescue mission and it will soften your attitude toward them, change the words that you use, modify your tone, and communicate love, not irritation or anger.

Commit for the Long Haul—Don’t expect a one-and-done conversation with your child, not even if your child has given their life to the Lord. That’s not how foolishness works. Instead, sin is slowly rooted out over the course of a lifetime. Be content then with making regular forays against it, rather than hoping to eliminate it once and for all.

Identify with Your Child—The parable of the unmerciful servant reminds us that while someone else may have sinned hugely against us, their debt is dwarfed by what we’ve done to God (Matt. 18:21–35).

And he didn’t crush you. Why? Because God’s an expert at dealing with his children when they talk back to him. Jonah is a great example of someone who clearly did not like what God was doing and told him so in no uncertain terms (Jonah 4:1–3).

And God responded by talking to him anyway (Jonah 4:4, 9–11), for his good, not because it made God’s life easier, but because that’s what Jonah needed.

And he’s done the same for you. He’s done everything with you that you now need to do with your child—he’s maintained his good plan for you, been moved with pity for you, and is committed to you for the long haul. So now, draw on what God has done for you as you step into your child’s world to engage them.

Circle Back Around—Sometimes you can speak into your child’s life in the moment. Many times, it’s wiser to let everyone cool off and bring it back up later. After wrestling with your own heart and hurt, try going back to your child and saying, Hey, I’ve noticed a pattern between us and I’m wondering if we can talk about it. It seems like there are times when you tell me you don’t want to hear what I’m saying to you. Can you help me understand what’s going on?

What you’re trying to do is get a conversation going around the issue of talking back in general. If you can, here are some things that may be helpful to bring up.

Expose Hidden Assumptions—Most of the time, when a child talks back to their parents, they don’t do so in a thoughtful, well-reasoned manner. Instead, they blurt. Immediately. Help them realize what’s going on when they don’t give your words five seconds of consideration, that they assume you have nothing to say to them and that they have no need of you. Ask them if those are the kind of assumptions they want to make.

Remind Them of the Big Picture—Your child lives in God’s world just like you do, and yet, just like you, they’re also tempted to ignore this vertical dimension of life. You need to bring it back into their awareness by reminding them that God has put you in their life to help them live well and that they have a responsibility to embrace what he’s given them.

But be careful as you do this. This is not a trump card or a ploy to checkmate them into obeying you. If that’s your goal—I finally have a way of making them listen!—then your children will (rightly) feel manipulated and resentful. This is why you have to be more concerned for them and the danger they’re in rather than the anger or frustration that you feel. If you’re not, you’ll use guilt to get what you want instead of pointing them to the grace that they need.

Bring in Some of Your Feelings—Children act without seeing the long-term impact of their actions on others. Again, without trying to manipulate your child, let them catch a glimpse of what goes on inside of you when they push you away verbally. Find ways to say, When you reject my words, I feel rejected. And I feel like pulling away—I won’t because I love you, but I am tempted—because I don’t like that feeling.

Forecast the Future—Help your child see the broader relational implications of what they’re doing. Say something like, I’m concerned about how your life is going to turn out if you keep going down this road. When people do the same things over and over, those things become part of us so that we don’t even think about them. They just become the way we automatically respond. So, think with me here: What do you think your life will be like if talking back to people becomes a part of you? How do you think that will impact your relationship with your grandparents? Teachers at school? Coaches? Maybe a boss at work? Do you think friends will like this about you? It seems like a good idea now—like it gets mom or dad off your back—but please be careful, because you’re forming patterns that you might really hate later on.

These are things that might help, but please remember that your desire—that your child hears you and lives better—is not something that you can make happen. This is the hardest thing about parenting: you can make your children hear your words, but you can’t make them love what you say. God didn’t give you that power in anyone’s life, including your child’s.

Your calling is to faithfully break into their world with God’s truth in as many creative ways as possible. Cry out to him for his grace to do that and for his mercy to soften your child’s heart so that they want to hear what you have to say.