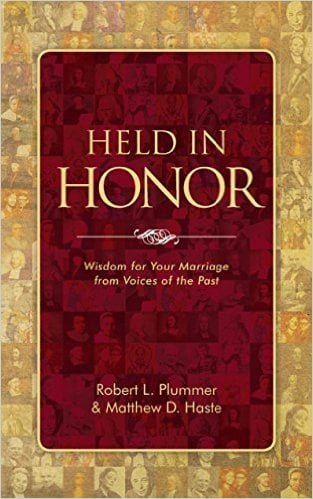 Traditional biblical marriage is under attack in our culture. This has resulted in some people questioning whether marriage between one man and one woman for life under God is even worth it anymore. Equally, so this has led many Bible-believing Christians to examine the Scriptures to understand what the Bible teaches about gender roles and marriage. While many articles and books have been written, and I’ve greatly enjoyed those modern perspectives, what is needed is ancient wisdom unearthed from the church fathers, the medieval period, the Reformation and Puritan period, early evangelicals, and the modern period. We have this wisdom now in the helpful new book, Held In Honor Wisdom for Your Marriage from Voices of the Past edited by Robert L. Plummer and Matthew D. Haste.

Each chapter is relatively short at one or two pages. On the first page, you read from the theologian. After this, you read from Plummer and Haste on how the teaching applies today. The authors leave no stone unturned in their examination of what the ancients taught, even disagreeing with them at times. Held In Honor will help Christians to diagnose how the wisdom of the past applies to our lives today.

Held In Honor is a much-needed book that will help Christians to have a well-rounded perspective on marital issues from some of the church’s greatest theologians. At various points, you’ll likely disagree with the ancients on their marriage advice, and perhaps even the authors perspective on the issues they explore and that’s okay. This book will help couples to balance each day of their lives together under the banner of Christ.

I received this book for free from Christian Focus for this review. I was not required to write a positive review. The opinions I have expressed are my own. I am disclosing this in accordance with the Federal Trade Commission’s 16 CFR, Part 255: “Guides Concerning the Use of Endorsements and Testimonials in Advertising.”