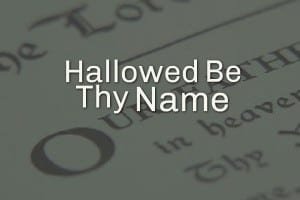 Hallowed Be Thy Name

Our Father in heaven, hallowed be your name. (Matthew 6:9)

The Lord ’s Prayer has been and continues to be spoken by believers around the world each and every day. The words of this prayer have served as a pattern for lifting our requests to God. It is a simple yet profound standard upon which to understand what it means to communicate with God through the mode of prayer.

As with a great many things throughout Scripture, I often wonder if through the repetition we have lost our understanding of a particularly profound element of the Lord’s Prayer, namely that of God’s name being hallowed. The word “hallowed” seems a bit antiquated as after all unless one is describing the hallowed halls of some building or sports venue, it is a term that has lost its popular usage in our modern day vernacular.

An understanding of what it means to hallow something, especially when it comes to the name of God is of particular importance. It is necessary to grasp hallowing God’s name in all aspects of our life since after all as adopted sons of God through the sacrifice of Christ on the cross, we can rightly say we are children of God and He is our heavenly Father. If we are going to call Him Father and we certainly should, that delineates taking on the family name and to desecrate and bring shame on the family name is something that should be rather unthinkable.

The word hallowed as used in Matthew 6:9 is the Greek verb hagiazō meaning to “to render or acknowledge.” When used in relation to God or that which is dedicated to the service of God (i.e. people or things), the word has the meaning of “to separate from profane things and dedicate to God.” These two meanings bring to light three important realities.

1. His name is above every other name. We sing this quite a bit in our hymns and modern worship songs so much so that I wonder whether  it has become more of a catchphrase rather than a statement that bears a great deal of meaning. The Apostle Paul in Philippians 2:9 notes “Therefore God has highly exalted him and bestowed on him the name that is above every name.” The word above means far more than just being on top of a list. Conversely, it connotes the idea of far-reaching superiority, a name that is far beyond any other name one could dream up or say. This should be no real surprise given He is Creator and sovereign Lord.

3. As children of God, we should bring honor to our Father’s name. How many times can you recall associating misbehaving children with their parents? “There goes little Johnny terrorizing the neighborhood again. By the way, isn’t he Bill and Sue’s boy?” Such a statement and question associates the actions of the misbehaving child with their parents with the child bringing dishonor to his parents’ name. If we bring this example closer to home, when we disobey God’s commands and act in a manner unbecoming a child of God, we bring dishonor on the name of God which by definition is taking His name in vain. On the flip side, when we are obedient children of God, following His precepts provided in Scripture, we bring glory and honor to God’s holy name, declaring to the world that we are in love with our heavenly Father.

God, through the prophet Ezekiel declared, “’I will make known my holy name among my people Israel. I will no longer let my holy name be profaned, and the nations will know that I the LORD am the Holy One in Israel” (Ezekiel 39:7). The important takeaway from this verse and this overall conversation is that God will not stand for His holy name to be taken in vain or profaned. If we claim to be His children and to be a people who truly understand what it means to hallow the name of God, then we will put aside the childish behavior that seeks to misuse and demean God and His name. We will be a people who declare to the world that God is holy and worthy to be praised.

As you take constant stock of your actions and your relationship with God, be mindful of the areas in your life that are not bringing glory to God. As those areas are identified, take them to God in prayer and allow God’s Word and the work of the Holy Spirit to uproot any fleshly desire that seeks to take the name of the Lord in vain. May all we say and do bring honor and glory to God.

I leave you with a quote from the great Puritan author George Swinnock:

“Worship is an act of the understanding, applying itself to the knowledge of the excellency of God, and actual thoughts of his majesty. … It is also an act of the will, whereby the soul adores and reverenceth his majesty, is ravished with his amiableness, embraceth his goodness, enters itself into an intimate communion with this most lovely object, and pitcheth all his affections upon him.”[1]