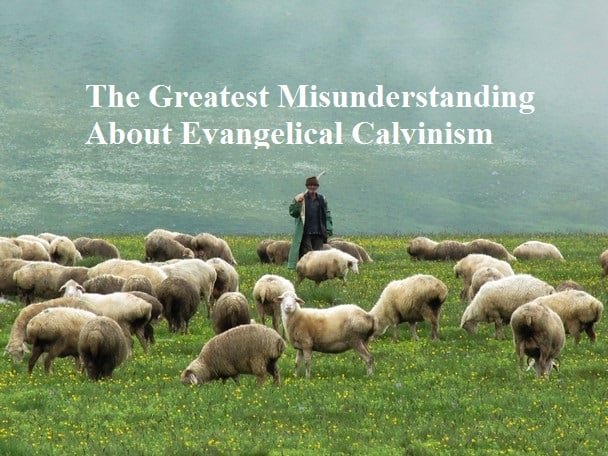 The Greatest Misunderstanding About Evangelical Calvinism

John 10:16, 25–27, “And I have other sheep that are not of this fold.
I must bring them also, and they will listen to my voice.
So there will be one flock, one shepherd. . . .
Jesus answered them, “I told you, and you do not believe.
The works that I do in my Father’s name bear witness about me,
but you do not believe because you are not among my sheep.
My sheep hear my voice, and I know them, and they follow me.”

Awhile back, I had a phone conversation with a church planting strategist in the Midwest. In discussing the merits and demerits of theology and church planting, he remarked: “The best church planters in our state are Calvinists.”

This admission did not surprise me because I know some of those church planters. They are men gripped by the gospel and desirous to see the nations come to worship King Jesus. It also didn’t surprise me because Calvinism—when it is rightly understood!!—always promotes missions, evangelism, and church planting. Church history and biblical testimony both support this fact.

Sadly, such cohesion between election and evangelism is often missed. The sentiment among many opponents of “Calvinism”—often, erroneously described as hyper-Calvinism (which is something else entirely)—is that such theology ruins evangelism. However, such a view is short-sighted. It overlooks key passages in the Bible that unite those two great themes (e.g., see Matthew 11:25–30; Acts 18:9–10; Romans 9 and 10; and 2 Timothy 2:10). Such claims also fail to remember that the modern missionary movement was, in large part, begun by Calvinists.

Therefore, by focusing on such evangelical Calvinism, I want to show from church history how Calvinism has always promoted missions, evangelism, and prayer.

Some of the greatest evangelists, missionaries, and ministers of the Gospel have been Reformed in their theology. George Whitefield, the powerful preacher of the Second Great Awakening, was staunchly Calvinistic. He regularly preached about the need for the new birth, which is an extension of the doctrine of effectual calling (or irresistible grace). Of predestination he wrote,

The doctrine of our election, and free justification in Christ Jesus are daily more and more pressed upon my heart. They filled my soul with a holy fire and afford me great confidence in God my Savior. I hope we shall catch fire from each other, and that there will be a holy emulation amongst us, who shall most debase man and exalt the Lord Jesus. Nothing but the doctrines of reformation can do this. All others leave free will in man and make him, in part at least, a Saviour unto himself. My soul, come not thou near the secret of those who teach such things . . . I know Christ is all in all. Man is nothing; he have a free will to go to hell but none to go to heaven, till God works in him to will and to do of his good pleasure. Oh, the excellency of the doctrine of election and of the saints’ final perseverance! (Arnold Dallimore, George Whitefield, 1:407–08; cited in Southern Baptists and the Doctrine of Election, 26–27)

Whitefield goes on to clarify his views on election by asking if God’s election was based on foreseen faith (the Arminian view of election):

Was there any fitness foreseen in us, except a fitness for damnation? I believe not. No, God chose us from eternity, he called us in time, and I am persuaded will keep us from falling finally, tell time shall be no more. (ibid.)

Unmistakably, one of the greatest—if not the greatest—evangelist in the history of the English-speaking world was an apologist for Calvinism. His views are repeated in missionaries like Adoniram Judson, Luther Rice, and William Carey. Indeed, many of the founders of the Modern Missions Movement were all Calvinistic in their doctrine.

Today, the book that has had the greatest missionary impact in the last quarter-century is that of John Piper. Piper’s Let the Nations Be Glad beckons Christians to take the Gospel to all peoples. His Calvinism has not stifled missions; it has challenged thousands of young people to forsake the American Dream for the glory of God. Likewise, one of the most ardent supporters of risk-taking missions today, David Platt, is a strong Calvinist. (His Together for the Gospel message, “The Fuel of Deaf-Defying Missions” (2012) was the doctrine of definite atonement). Of course, such examples don’t mean that all Calvinists are equally zealous for missions and evangelism. But these men offer counter-examples to the claim: Calvinism kills evangelism. [bctt tweet=”In the history of the church, hyper-Calvinism kills missions; true Calvinism does not.” username=”servantsofgrace”]

Similarly, George Muller, the great man of prayer, evangelism, and orphan care was a strong Calvinist. He recounts how for the first four years of his Christian life, he experienced very little improvement. That changed when he was providentially introduced to the doctrines of grace. While recovering from illness at a little town called Teignmouth, he conversed with a man who would change his views on the Bible and Calvinism for his life. He records,

In the course of time, I came to this country, and it pleased God then to show to me the doctrines of grace in a way in which I had not seen them before. At first I hated them, “If this were true I could do nothing at all in the conversion of sinners, as all would depend upon God and the working of His Spirit.” But when it pleased God to reveal these truths to me, and my heart was brought to such a state that I could say, “I am not only content simply to be a hammer, an axe, or a saw, in God’s hands; but I shall count it an honor to be taken up and used by Him in any way; and if sinners are converted through my instrumentality, from my inmost soul I will give Him all the glory; the Lord gave me to see fruit; the Lord gave me to see fruit in abundance; sinners were converted by scores; and ever since God has used me in one way or other in His service.” (Mueller, Narrative, 1:752)

The list goes on. The great abolitionist William Wilberforce, who was friend of John Newton, was another man convinced by the doctrines of grace. Though he avoided the term (because Calvinism was pejoratively used), his love for the slaves and his self-sacrificing labor to bring their emancipation was upheld by his understanding of the Gospel (esp. justification by faith) and his belief in the sovereignty of God in salvation.

Additionally, it should be noted that historically speaking most of the founders of our country were Calvinistic. The Puritans who came to Massachusetts were strongly Calvinistic; most of the genuinely signatories on the Declaration of Independence were influenced by Calvinistic doctrine[1]. Even John Leland, well-known for the part he played in defending religious liberty (and receiving the letter to the Danbury Baptists from Thomas Jefferson about church and state), advocated the doctrine of effectual calling and unconditional election. He wrote, “Christ did, before the foundation of the world, predestinate a certain number of the human family for his bride. . . . Jesus died for his elect sheep only.”[2]

This list of names should not persuade anyone to be a Calvinistic. But it should be evident that Calvinism—when it is rightly understood—never discourages evangelism, missions, social ministry, prayer, or any other Gospel ministry. Instead, it always promotes it. May God raise up such missions-minded, evangelistic Calvinists today.

In the end Calvinists believe there are lost sheep (the elect) all over the world, and it is our commission to go to them, proclaim the message to all people, so that these sheep can hear the shepherds voice, turn from their sin, and be saved. We get this idea from John 10, and it motivates us to proclaim the Gospel.

Of course, there are disobedient Calvinists who do not evangelize. Just as their are lazy Arminians who do the same. The point is that the system of doctrine does not inherently deter evangelism. Just the reverse.

Evangelical Calvinism empowers self-sacrificing missions (2 Timothy 2:10). It undergirds the success of the ministry (1 Cor 15:58). And it prompts countless missionaries to go to violent cities (like Corinth, see Acts 18) or dangerous countries (like Afghanistan) with the sure promise that Jesus’ presence with them will protect them until all the sheep hear the gospel and be saved (cf. 1 Thess 1:4–5).

Therefore, it is a mistake to assume or assert that Calvinism as a system hinders evangelism. Sin, disobedience, and angry quarrels about doctrine hinder evangelism, but the doctrines of grace are some of the most precious and powerful motivations for doing missions.

This post first appeared at David’s blog and is posted here with permission.

[1] In America’s God: From Jonathan Edwards to Abraham Lincoln, Mark Noll chronicles the shift in theology in colonial America. While it began consistently Calvinistic, in time the democratic ideals of the United States slanted the theology towards Arminianism. One classic example would be the difference between the theology of Jonathan Edwards in the first Great Awakening, and Charles Finney in the second Great awakening. The former was Calvinistic, the latter was decidedly not.