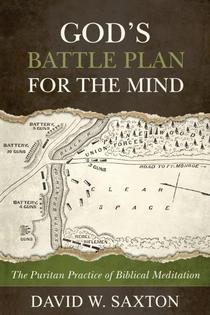 God’s Battle Plan for the Mind by David W. Saxton 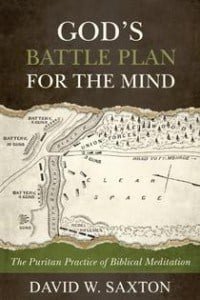 God-honoring biblical meditation is on a downward trajectory as far as much of Western Christianity is concerned. The sad reality is that most born-again believers are satisfied with doing only their daily devotional, saying at least a five minute prayer (because anything less than 5 minutes means you don’t qualify as “spiritual enough” for that day), and then heading out to tackle whatever job, errand, and/or schooling which might be on their agenda for the rest of the day. To make matters worse, if you were to ask most Christians (especially in America) what it is that they read in their Bible’s that morning, they very likely would struggle to explain to you in any kind of detail exactly what they read and how it impacted any of their thoughts and/or actions throughout the day. Rinse and repeat for years at a time. How can we break out of that kind of monotony? Isn’t there more to the Christian life than that daily routine where you rarely feel close to God and life seems to be defined by going through the Christian-motions instead of drinking deeply from the well of Christ’s abundant life? I submit to you that one way this kind of monotony can be overcome is the practice of biblical meditation. In God’s Battle Plan for the Mind, author David W. Saxton takes us on a fantastic journey through the teachings of the Puritans on how to correctly practice biblical meditation. The Puritans were serious about their walk with Christ being more than just a daily reading of the Bible and a little time spent in prayer. Instead, the Puritans were passionate about meditating on the Word of God throughout the entire day, and Mr. Saxton, does a splendid job of showing from numerous Puritan authors just how they accomplished their goals of thinking about, and making much of Jesus.

In Chapter 1 of the book, Mr. Saxton zeroes in on the incredible benefits of practicing biblical meditation. One of the main benefits is a deeper understanding of God’s Word, and thus a deeper understanding of the nature of God. Instead of turning to fleshly options to answer life’s difficulties, you are more apt to turn to God’s Word and consequently respond to the issues of life in a more God-honoring way. As Mr. Saxton says:

“Why have the past few generations of believers not focused on biblical meditation? Although we could answer this question in different ways, the primary reason is a lack of confidence in God’s Word to sufficiently deal with the issues, problems, and temptations that believers face. We are bombarded with difficulties, enticements, and anxieties that leave us feeling stressed and inwardly troubled. How has God designed for us to find comfort and relief for our hurting hearts? Is God pleased that His people use the world’s escape mechanisms: entertainment, alcohol, hobbies, worldly amusements, mind-numbing pop music, constant shopping, and sports? While we recognize God has freely given His people certain upright enjoyments in this world, God has chosen primarily to help us deal with discouragements and sin by applying divine truth to our minds. Meditation ties people’s fluttering minds to their true spiritual anchor of stability.” (pg. 3)

Chapter 2 contrasts biblical and unbiblical forms of meditation, with the main focus being on the unbiblical forms that quickly occupy our minds when the word “meditation” is mentioned. The fact of the matter is that none of us have a choice as it pertains to meditation…our minds are always going to be occupied with something. Mr. Saxton explicitly calls attention to this idea when he says:

“Although the Bible speaks clearly about the necessity of meditation in the life of a healthy, growing child of God, many feel they can get through the Christian pilgrimage without it. However, no one truly has that option—everyone meditates on something. We either learn to practice and benefit from biblical meditation, or we inevitably allow our minds to wander dangerously through sinful or depressing thoughts.”

The author goes on to talk about the unbiblical meditations practiced by most of those in the Catholic Church, Eastern Religions, and the times we dwell on evil or lesser things.

Chapter 3 provides readers with an accurate definition of biblical meditation as it is used in both the Old Testament and New Testament. Biblical citations are provided from both Testaments on God’s desire that we meditate on His Word, how that looks, and the benefits of doing it.

For me personally, Chapters 4 and 5 were the parts of the book I was most looking forward to when I embarked on reviewing this work. Being someone who is not in full-time ministry, I wanted to read what Mr. Saxton’s advice (and by extension the Puritans) would be to lay-people on how to practice biblical meditation in the day-to-day grinds of life. Chapter 4 focused on what the Puritans called “Occasional Meditation” and Chapter 5 focused on “Deliberate Meditation”. It is pretty easy to figure out the differences between the two, but it was a fresh reminder that if I am going to practice true biblical meditation then not only am I going to have to set-aside deliberate time during the day to meditate on God’s Word, but I am also going to have to practice dwelling on God’s Word in the daily grind of life. Occasional meditation, “…makes use of each daily experience by comparing or contrasting it to the greater truths of God’s Word. John Ball described this as ‘a serious bending of the mind to think upon some good and profitable subject…as we go about the duties of our calling or be exercised in some honest and lawful recreation.’” Occasional meditation, as defined by the Puritans, “is spontaneously using any occasion of life to lift one’s thoughts Godward to consider His greatness, glory, and truth.” Even though the Puritans saw deliberate mediation as more important than occasional meditation, both were integral to a healthy and fruitful Christian life. I was glad to read the exhortations that I needed to maintain a constant focus on God’s Word no matter how mundane the task.

God’s Battle Plan for the Mind is a unique book in a contemporary Christian culture focused on everything but how to meditate biblically on the Word of God. My main issue with the book is the sometimes seemingly endless amounts of Puritan quotes in each chapter. Don’t get me wrong, I loved reading what the Puritans had to say about such an important topic, but there were times that the numerous Puritan quotes in back-to-back-to-back sentences would distract me from the point that Mr. Saxton was trying to make. I think if there were about a third less Puritan quotes in this book, then it would have been a much more enjoyable read. However, that would not stop me from highly recommending this book to any of my friends. It is absolutely worth every minute you spend reading this book.

In accordance with FTC regulations, I would like to thank Reformation Heritage Books, and Cross Focused Reviews, for providing me with a review copy of this book in exchange for a fair and honest review.