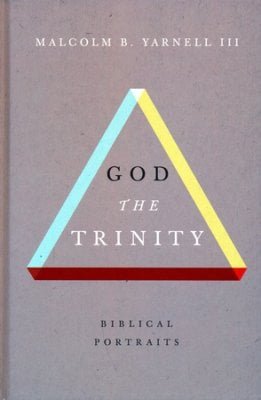 When it comes to discussion of the Trinity, Christianity surprisingly runs quite a gamut of opinions and thoughts. While the Trinity is one of the most creedal and thus essential doctrines of Evangelicalism, some accuse the Trinity of being explicitly unknowable according to Scripture. Some, though they recognize the Trinity in Scripture, do not put much significance on the matter. Even within the camp of Evangelicalism, we’ve seen lots of recent debate surrounding the roles and functions among the person of the Trinity, with the tiniest of nuances laboriously discussed. Malcolm Yarnell III has set out to answer these two key attacks on the importance of the biblical Trinity and provide a fresh look at Scripture’s thoughts on who the Trinity specifically is with an important book, God The Trinity: Biblical Portraits.

As Yarnell puts it, he spends a majority of his time “evaluating the Biblical source material for the Trinity” (vii), playing off of the metaphor of art. As he alludes to in the book, the task of evaluating every single Trinitarian text in Scripture would be “a gargantuan task” (25), with over 120 texts! However, Yarnell does a masterful job of reducing this heavy undertaking to a few subheadings. He desires to see a recovery of “large, comprehensive structures of meaning” (11).

One of Yarnell’s most important chapters is the opening one, in which he sets the stage for his arguments with “The Identity of God.” He asserts that it is the very name of God that sets forth a biblical concept of the Trinity. “There are three different names provided–Father, Son, Holy Spirit–but “name” is either mistakenly or intentionally used in the singular. If intentional, it appears to indicate a singular identity for the three” (20). Yarnell then moves towards a more robust and narrow treatment of biblical Trinitarian texts, engaging with Greek words like “καί” and Hebrew words like “שְׁמַע.” Yarnell’s goal throughout the book is simple: to show that “the Father is the source from which the Son is begotten and the Holy Spirit proceeds” (109).

Recently we have seen quite a bit of controversy surrounding discussion on the Trinity, especially on the note of eternal functional subordination. Yarnell is an important voice in this matter. While some have accused Baptist theologians of poor exegesis in this matter, Yarnell makes compelling points to defend his views, offering in God the Trinity one of the premier books on the Trinity any Baptist theologian has put out. I am grateful for this volume and know I will return to it as a resource for an exegetical and biblically-based approach to the Trinity.