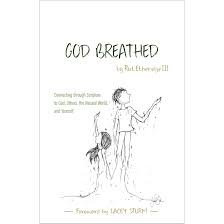 I am my own and I am mine. In the West, we live by this mantra. We proclaim it with exuberance and pride. We write stories and sing about our freedom to be ourselves, to follow our own hearts, to not be restrained or limited by anything outside of ourselves. We’ve cut ourselves free. But what if instead of breaking the chains, we’ve cut off the oxygen?

It’s not hard to see that this is the case. Pervasive loneliness and isolation, growing suicide rates, desperate attempts to distract ourselves and mute questions of ultimacy — all point to something amiss in the West’s narrative of personal autonomy. Rutledge Etheridge III, in his book God Breathed: Connecting through Scripture to God, Others, the Natural World, and Yourself, challenges this narrative and mantra. Addressing young adults who have grown up with no experience, or bad experiences, in the church, Etheridge argues that we’ve cut ourselves off from the transcendent — and we’re suffocating.

Cut off from the transcendent, we live under what Etheridge calls “the ceiling of self.” Under the ceiling of self, “we can never get beyond ourselves in our knowledge of reality. All we have is perception” (5). Under the ceiling of self, we have claimed the role of god and have pursued our “godding” — Etheridge’s term for acting as if we possess the significance and power of God — with exuberance. But Etheridge shows the devastating effects of our godding on our relationships and our selves: “Our godding removes our true significance from our sight and causes us to gaze instead, first in worship and then in horror, upon a fabricated self, ever diminishing and dying beneath the ceiling of self. Heirs of generations’ worth of godding, we’ve never loved ourselves, and or loathed ourselves, more than we do today” (152).

The way forward, Etheridge argues, is to “call shenanigans” on the ceiling of self: to call it out for the lie that it is and pursue the truth as found in the Bible. Etheridge’s book is, in some sense, a love song to the Bible, ending with a chapter on the beauty of the Psalms as expressions of all our emotions rightly ordered. In an age that has cast off the Bible as out-dated, restrictive, and irrelevant, Etheridge passionately takes his reader back to the Bible again and again. He insists that taking the Bible seriously — and here he indicts the modern church for failing to do this —  “brings God close, busting right through the ceiling of self. When it’s read and taught, preached and prayed, studied and sung on its own terms, the Bible speaks to us with a voice not our own, but from a heart that knows us better and loves us far more than we know and love ourselves” (38). We can take the Bible seriously, Etheridge argues, because the Bible is the very word of God, through which God actually speaks to us.

Etheridge’s work is admirable in his posture towards his audience. Much has been disparaged about the “snowflake generation,” but Etheridge never condescends. Love for his audience — a love that has clearly taken the time to understand and listen, and a love that doesn’t shy away from saying what others might not want to hear — is written on every page. His tone can be self-deprecatingly humorous, and it works winsomely. This is not the voice of an academic admonishing you for your questions and doubts; this is the voice of a friend coming alongside of you and longing for you to know the truth that brings true freedom and abundant life.

Etheridge’s book, at over 300 pages, reflects the enormity of his task. His book delves into philosophy, art, communication, reproductive and sexual ethics, identity — all the while tracing the story of redemption through the Bible and giving a robust defense of the faith. It is no small thing to convince someone that the freedom they relentlessly pursue is actually smothering them, or to woo someone hurt and abused by the Church back to her. Etheridge recognizes this: he doesn’t resort to quick dismissals or simplistic claims, or ignore the fact that the Bible has difficult stories and theology.

I am partly in Etheridge’s target audience: I am in the generation that has grown up under the ceiling of self, memorizing the Disney songs that proclaimed I could be whatever I wanted to be and that the highest good was to be true to myself. In God’s grace, I grew up in the church and haven’t left. From this position, I am not primarily who Etheridge is speaking to.

And yet, I am sure it is a book I will come back to again and again. Whether in the context of ministry with the young people in our congregation and presbytery, or in conversations with friends and co-workers who are captivated by the lie that freedom lies outside of limits and constraints, Etheridge’s book is a valuable resource. It models a posture of loving those on the fringes or outside of the church: careful to listen to the significant questions and issues that they face, and bold to attack the lies of our culture.

Originally from Western Pennsylvania, Laura now lives in Melbourne, Australia with her husband and three children, where they are part of a local church revitalization. Her days are full of homeschooling, teaching English to immigrants, and learning to see and love her new home as Jesus does. Laura serves as an editor for Velvet Ashes, and she blogs at From Underneath the Eucalyptus.