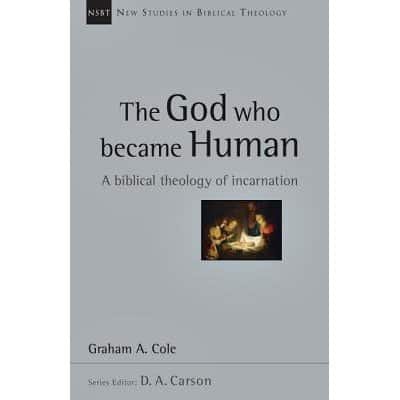 The God Who Became Human: A Biblical Theology of Incarnation (Graham A. Cole)

When it comes to doing biblical theology, a common pattern is to take a topic or a theme and trace it from Genesis to Revelation. The Covenants, for example, between God and man, are meant to be a theme that we attempt to look for from the beginning of humanity to the ending of mankind, showing how God and man interact covenantally throughout Scripture and history. “But what of the Incarnation?” (17). Is the idea of God taking the form of a servant, being born in the likeness of men a biblical-theological narrative being told even in the Old Testament? As Graham Cole positions this question, “was incarnation part of the hope of Israel?” (17). To that end, The God Who Became Human is an exploration of the Scriptures to see what God’s Word has to say about Jesus Christ becoming human, both in anticipation of the event and in reflection on the event.

To begin to unpack the biblical theology of the doctrine of the Incarnation, Cole starts with spending three chapters primarily examining the Old Testament to discern whether or not the Incarnation can be explicitly seen in the lives of ancient Israel. Cole extends his conversation around the anthropology of the Incarnation to three distinctions – an anthropomorphic, anthropopathic, and anthropopraxic taxonomy – demonstrating the breadth to which God becomes human. Although Scripture gives us much evidence for this, what it doesn’t provide much evidence for, as Cole seeks to demonstrate, is how the people of Israel (and thus the OT Scriptures) speak and think about Incarnation. Chapter Three is one of the most important chapters of the text, particularly the section in which Cole examines four possible “incarnation-laced” texts from the Old Testament. Cole, against the views of men such as B.B. Warfield and Raymond C. Ortlund Jr., contends that “no expectation of an Incarnation is plainly in view in the pages of the Old Testament” (91). Cole suggests a more typological reading of Scripture, one which is aided by reading in retrospect.

Chapter Six is perhaps my favorite of Cole’s chapters, analyzing the significance of the Incarnation. Cole determines that there is widespread theological and existential importance for the Incarnation, namely, how it affirms the created order, how it undergirds the value of humanity, and how it informs theodicy. As becomes apparent throughout the book, the Incarnation has something to say even about our conversations surrounding the sanctity of life, how we pursue social justice, and much more.

Cole’s careful and articulate work on demonstrating the unraveling the Incarnation message is an important contribution to our biblical-theological studies. His exegesis is clear and straightforward, and his continual appeal to the Scriptures before we give an answer to a question is refreshing. Anyone seeking to better understand the theological significance and the Scriptural progression of the Incarnation should pick up this volume.