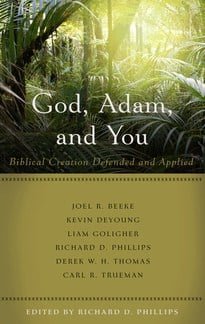 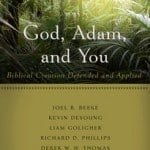 In recent days, many people have questioned whether Adam and Eve are really persons or not. Typically the people who question Adam and Eve also question whether the Bible is authoritative, inerrant and sufficient. Most of these people are scientists with no Bible or theological training and traditionally come to the Bible not to learn from its teachings but rather to impose their scientific findings upon the Bible. In 2013 there was a conference held by the Philadelphia Conference on Reformed Theology under the title “God, Adam, and You” out of which comes the book God, Adam, and You Biblical Creation Defended and Applied.

The whole book explores one question, “What difference does Adam make?” The book takes a serious look at Genesis 1-3 with a view to defend the literal interpretation of the first three chapters of Genesis. Some people have abandoned Adam as a historical person who lived and died in real history. As the authors open the biblical text they help us understand not only how to respond to attacks on the first three chapters in the Bible but also what they mean. In chapter one Dr. Thomas looks at the Bible’s first word. Chapter two by Dr. Joel Beeke considers the case for Adam. Kevin DeYoung looks at two views of the human person in chapter three. Chapter four by Liam Goligher looks at Adam’s role in the Garden. Richard Phillips looks at the Bible and evolution. In chapter six Mr. Phillips also considers God’s design for Gender, Marriage, and Sex. Dr. Thomas in chapter seven considers differing views on the days of creation. Chapter eight is where Dr. Beeke considers Christ, the Second Adam. Chapter nine looks at God’s Garden to God’s city by Richard Phillips. Carl Trueman in the final chapter looks at original sin and modern theology.

Ideas have consequences, and those consequences are evidenced in how one understands Genesis 1-3. A literal interpretation of Genesis 1-3 will help the believer to have a proper understanding of God, His Word, and the person and work of Jesus Christ. If one takes Genesis 1-3 any way other than literally, then it will result in a faulty understanding of the Bible and in asking the wrong questions, such as scientists are asking about whether Adam and Eve are real persons. Understanding Adam and Eve as historical persons is important because Paul explains in Romans 5:12-21 that Adam and Eve were, in fact, real persons.

God, Adam, and You is an excellent book that will help readers to understand the literal interpretation of Genesis 1-3 and how to respond to attacks on the Bible. In seminary, I wrote a research paper on the subject of the historicity of Adam and wish I had this book during my research and writing of that paper. This book would be helpful for pastors, Sunday school teachers, and Bible study leaders to use in their studies on Genesis, and Romans, among a whole host of other topics. I highly recommend this book and believe that as you read it you’ll learn the difference the historical Adam makes for us today, as followers of the second Adam, Jesus Christ.

I received this book for free from P&R for this review. I was not required to write a positive review. The opinions I have expressed are my own. I am disclosing this in accordance with the Federal Trade Commission’s 16 CFR, Part 255: “Guides Concerning the Use of Endorsements and Testimonials in Advertising.”