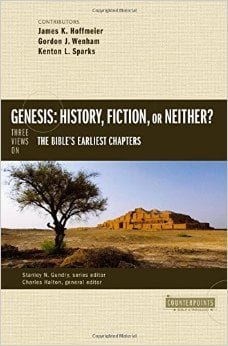 Genesis: History, Fiction, or Neither? 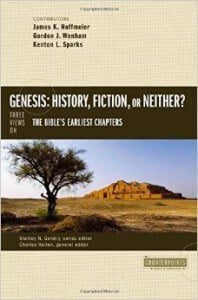 The book of Genesis and specifically the exegesis and application of its first eleven chapters have resulted in a plethora of opinions among scholars and layman alike. Does the Genesis creation account reflect actual history or is it merely a symbolic representation of God being Creator? Did God truly flood the entire earth during the day of a man named Noah? How does science inform our understanding of these biblical accounts or vice versa? Finally, is Genesis actual recorded history or are these merely stories provided by God to engage the pagan ideals of the surrounding cultures, kind of a I am better than your gods type concept?

Genesis: History, Fiction, or Neither?, part of the ever expanding and helpful Counterpoints series from Zondervan, contains three essays on how to approach Genesis. Each author also takes a stab at evaluating the essays of their fellow contributors. James Hoffmeier shares the perspective that Genesis shares both factual history and reliable theology, Gordon Wenham takes a similar yet slightly different approach noting Genesis 1-11 are more of a protohistory, a somewhat “fuzzy” picture that is not exactly history but isn’t exactly not history, and finally, Kenton Sparks takes the view that these chapters represent not actual history, but more of a reflection of the viewpoints one would find in that time period with God merely helping the people of that day understand how He differs and His actions differ from the gods of the surrounding cultures.

Each author was tasked with identifying the overall genre of Genesis 1-11, supporting their choice of genre, examining the implications of their genre choice, and then applying that genre by interpreting the story of the Nephilim, Noah and the ark, and the Tower of Babel.

All three authors are very careful to avoid describing Genesis 1-11 as being myth; however, Sparks does seem to toe the line somewhat while not overtly jumping into the mythological chair so to speak. I was especially interested to see how the choice of genre by these three authors impacted their approach to the events outlined in Genesis 6:1-4 as I have long been fascinated with this small section of Scripture. While Hoffmeier didn’t go into great detail as to the various viewpoints surrounding the history on the Nephilim, he seemed to avoid providing a specific response. He does suggest the Genesis 6:1-4 recalls a “genuine memory from early human history”, yet in the end, I was not sure what his stance truly was and why. It seemed as if he rejected the idea the Nephilim were fallen angels, but did not provide the reader with what exactly they were from a historical perspective. This left me wondering why they could not be fallen angels and why that approach had to be considered solely in the mythological construct.

Wenham also aptly explained the various views on the Nephilim while noting in a bit more detail the connection between ancient myth and possible historical reality. I appreciated his honest questions about the Sethite theory, one’s which I have posed myself. While at the outset of this book. I believed I would be more in line with Hoffmeier in regards to the Nephilim, in the end it seems I found more to like in the approach of Wenham which was something of a surprise to be honest. When it comes to the approach taken by Sparks, his viewpoint that Genesis 1-11 is borderline myth did nothing to really engage the historical possibilities of the Nephilim or any other of the assigned topics for that matter.

Part of the enjoyment of the Counterparts series is the interaction that takes place between the contributors. Given the similarity of the views of both Hoffmeier and Wenham, it was understandable that the response by Hoffmeier to Wenham’s essay was brief. Both Hoffmeier and Wenham had much to say about the essay by Sparks and understandably so given his embracing of evolutionary dogma and 19th century biblical criticism which cloud his understanding of Genesis 1-11.

Overall I found this book to be quite enlightening. There were many points I agree with from both Hoffmeier and Wenham and of course points I disagree with as well. There seemed to be little if anything I found agreement with in the essay by Sparks. Even still, the three perspectives presented were informative, and the interaction between the authors was also informative while remaining irenic. Given the foundational nature of Genesis 1-11 for the remainder of Scripture, this is an important subject and I can certainly recommend Genesis: History, Fiction, or Neither? as a valuable contribution to the ongoing discussion of Genesis and Scripture at large. It is a helpful book for scholars and laymen alike in the ongoing tradition of the Counterpoints series.

I received this book for free from Zondervan and the opinions I have expressed are my own. I am disclosing this in accordance with the Federal Trade Commission’s 16 CFR, Part 255 : “Guides Concerning the Use of Endorsements and Testimonials in Advertising.”