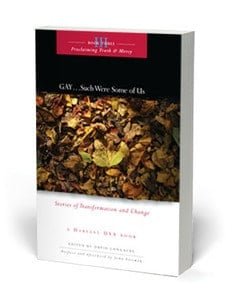 Gay…Such Were Some of Us

Our modern culture has granted a certain kind of power to personal biography. Whether we are reading about a child who “visited heaven,” or allowing a journalist to communicate their authentic self-identity, personal stories are regarded as sacred in our culture. It is for that reason that Harvest USA’s Gay…Such Were Some of US is worth reading. While our culture is consistently telling us that homosexuality cannot be changed, 15 separate authors have been drawn together to communicate precisely the opposite. Their personal stories of transformation are a strong rebuttal to the dominant cultural opinion.

Harvest USA is a non-profit organization started by the PCA, which aims to minister the gospel to the sexually broken. Since 1983, they have been ministering to the homosexual community in Center City, Philadelphia. In this small book, 110 pages, David Longacre has compiled various stories from those who have found help at Harvest and who have experienced various degrees of “change.”

“Change” is a dangerous word wen applied to this subject. It’s dangerous not just because the dominant cultural voice calls any such language abusive, but because “change” itself looks different for different people. Longacre recognizes this and attempts to clarify the purpose of the book. This is not a book that argues all people will change, that everyone who desires to be freed from a same-sex attraction will experience such freedom. He is careful not to universalize a few people’s experiences, but rather wants to use them to offer both some encouragement and potentially a counter argument. He writes:

The question that this book answers is whether some people can experience change in their homosexual desires and behaviors. It does not say it is easy. It does not say that everyone who wants to change will. However, it does show that some people have experienced change. This disproves the claims of many pro-gay advocates that homosexuals cannot change; some can and some have. If some can, then homosexuality is not innate and unchangeable (6).

The book itself is not written as an apologetic, thought that is clearly part of Longacre’s intent behind it. Rather, the stories stand as personal accounts of God’s grace and mercy in a few individual’s lives and are worth reading for that reason alone.

The stories are as unique as the individuals who write them. Readers will find a number of connection points as they work through each testimony; no single storyline or narrative repeats itself. The varied explorations in evolution to and through same-sex attraction remind us that there is no singular experience. The stories are all short, a few pages in length, but that does not decrease or diminish its significance. In a few cases John Freeman, President of Harvest USA, adds a eulogy of sorts to those stories whose author has passed away. These are particularly beautiful and moving.

The idea that change might be possible will continue to be contested, but Such Were Some of Us reveals that it is in fact possible. The book as a whole handles the subject with care and sensitivity, and it never glories in sexual sin. It is honest but never graphic, and it is always concerned to point readers to the truth of God’s transforming grace as found in the gospel. These are beautiful stories, they are the kind of stories that our world, and the church, needs to hear. I highly commend Gay…Such Were Some of Us to all readers, especially those struggling to find hope in their own unwanted attractions.