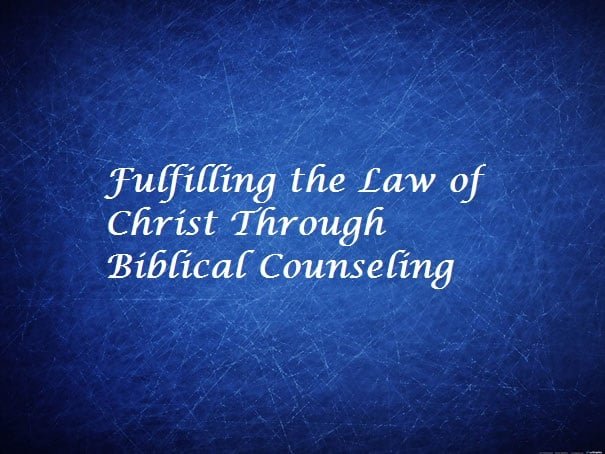 Fulfilling the Law of Christ Through Biblical Counseling

“Carry one another’s burdens; in this way you will fulfill the law of Christ.” —Galatians 6:2 (HCSB)

The mental health community recognizes September as National Suicide Prevention Awareness Month. As a biblical counselor and former police officer who responded frequently to calls for service involving human tragedy (i.e., suicide, domestic violence, child abuse, rape, etc.), I’m reminded of the urgent need for spiritual hope in our communities and of the Church’s role in providing the hope that so many desperately need.

Over the course of my law enforcement career, followed now by several years of pastoral and counseling ministry, I have grown increasingly convinced of the power of the Gospel to not only save us in eternity but to redeem us in this lifetime, including our disordered thoughts and troubled emotions.

When we acknowledge this, we are not denying the role of appropriate medical care—to be human is to possess both a body and a soul. Neither are we making outlandish declarations about the cure of organic mental illness through prayer and the reading of Scripture alone. But to deny the Gospel’s power to restore the mind is to suggest that for most of human history, that is, until the advent of psychoanalysis and psychotropic drugs, that we were without any tangible hope for the restoration of our minds or the alleviation of emotional suffering.

A History of Care

“Counseling belongs in and to the church of God.”

This mantra of the greater biblical counseling movement raises eyebrows in an age that dismisses the authority and sufficiency of Scripture while uncritically assuming the efficacy of secular mental health care. This phenomenon exists despite serious questions about secular treatment methodologies based on research outcomes that cannot always be reproduced and counseling theories that do not otherwise align with Scripture.[1]

Through the effective use of media and its dominance in academic and medical arenas, secular psychology has a firm grip on societal mental health structures. Accordingly, mainline and evangelical churches have too often surrendered control of counseling to those who adhere to theories established by Freud, Jung, Rogers, Skinner, et al. The result is that today’s most common approaches to counseling reflect a societal shift away from a biblical worldview while embracing a medical model of mental health care that more often than not establishes a pathology for nearly every problematic behavior and emotion.

Dr. David Powlison observed that following the Civil War, “Professional jurisdiction over Americans’ problems in living gradually passed form the religious pastorate to various medical and quasi-medical professions: psychiatry, neurology, social work, and clinical psychology. . . .  Psychiatry and psychotherapy displaced the cure of souls.”[2] While the debate concerning the Church’s ongoing embrace of biblically questionable counseling theories continues, what is clear from Scripture and church history is the Church’s responsibility to provide biblically faithful, clinically-informed counsel in the context of the Great Commission (Matt. 28:19-20).

A Biblical Foundation for the Care of Souls

Galatians 6:2 is one important verse that urges the Church to re-engage in the counseling task. Paul instructs the church, “Bear one another’s burdens, and so fulfill the law of Christ.” To understand this verse and apply it properly, we need to consider what “burdens” Paul had in mind. Were these burdens primarily physical (i.e. food, shelter, and clothing), or more holistic? Further, we need to consider what Paul meant by the “law of Christ,” because for Paul, its fulfillment was the desired outcome.

Although a few scholars find that Galatians 6:2 is independent of Galatians 6:1 because of the absence of a connecting article in the Greek text (as happens at Galatians 6:3), Paul’s point does not arise in a vacuum. Restoring a “brother” who has fallen into some type of “wrongdoing” is accomplished in part when burdens are shared. How then do we practically observe this passage? For many people, a season of intentional and systematic counseling of God’s word is central to their discipleship.[3]

It was in this context that Paul called upon the church to “bear one another’s burdens” and in so doing “fulfill the law of Christ”—a law that, according to Paul, transcends the law of Moses (Galatians 3:2-3). To this point, Bruce wrote, “The ‘law of Christ’ is for Paul the whole tradition of Jesus’ ethical teaching, confirmed by His character and conduct and reproduced within His people by the power of the Spirit.”[4]

This law of Christ was nothing less than the command of Jesus for believers to love one another and their neighbors as they love themselves (Jn. 13:34; Matt. 22:39).

With the call to love one’s neighbor in view, the command to “carry one another’s burdens” takes on the clearer meaning and may be applied more holistically to the whole man. Carrying one another’s burdens certainly includes meeting physical needs, but it does not end there. The spiritual and emotional concerns of those who suffer fall within the scope of Paul’s intent and may be properly addressed through biblical counsel.

Rapa agrees in his commentary on Galatians 6:2 that sin is, at a minimum, included in Paul’s admonition. He wrote, “Joining together to restore one who has sinned or to prevent others from being ‘caught in a sin’ in the first place is a way that believers may ‘serve one another in love’ (5:13; cf. Ro 15:1-3).”[5] Moo, on the other hand, takes an expanded view of “burdens” in Galatians 6:2 to include “all those problems that afflict our brothers and sisters”(emphasis added).[6] In light of Christ’s command to love, Moo’s interpretation should be preferred.

The gospel is the power of God unto salvation for all those who believe and by it sinners and sufferers experience transformation rather than conformity to the patterns of the world (Rom. 1:16; 12:2). Paul understands, however, that people live in the context of a world marred by sin and therefore, will go on experiencing the varied effects of the Fall, both physical and non-physical (Gen. 3). For this reason, he calls upon his audience to fulfill the law of Christ by carrying one another’s burdens in whatever form they may come (i.e. sin and suffering).

“Kind people look for ways to do good. Patient and faithful people don’t run away when people mess up. Loving people serve even when sinned against. Gentle people help a struggler bear his burden. Galatians 5 and 6 are filled with hope.”[7]

As with Moo, Lane and Tripp see Christ-like love as the source of hope in Galatians 6:2 along with a call to enter into the suffering of others across the full spectrum of human struggle. This is the essence of biblical soul care and why the Church must re-consider its obligation to provide intentional forms of counsel.

The Stakes Are High

According to the National Institute of Mental Health, in 2013, there were approximately 43.8 million adults aged eighteen and over in the United States with some form of diagnosable mental illness.[8] That statistic excludes children, which would only serve to increase the extraordinary figure.

While the definition of what constitutes “mental illness” is not a settled debate, that people struggle with a multitude of problematic behaviors and emotions that help fuel significant societal concerns are evident even if the source of those troubles are also debated (i.e. biological or spiritual). Whatever the cause of one person’s mental, behavioral, or emotional trouble, the Gospel is everyone’s preeminent need and those needs are often properly addressed through a Word-based counseling ministry.

With significant numbers of those diagnosed or diagnosable being found within the Church at large, the issue of mental health and mental illness is one that affects the mission of making disciples. This ought to communicate to the Church an area of immediate Gospel-need and missional opportunity, yet many people, both inside and outside of the Church, perceive the Church to be less than responsive. This communicates to some a casual indifference to emotional suffering or even an unbelief in the sufficiency of the Word of God to actually transform the mind (Rom. 12:2). The Church can and must do better.

The Church has historically responded well to the physical suffering of others through such things as food pantries, clothing closets, and soup kitchens. The past one-hundred years or so have not been equally distinguished by soul care through counseling. With the advent of quality training programs available at both the academic and lay levels, inadequate preparation is no longer a reasonable excuse to ignore this critical ministry concern.

Whether that counsel is provided for through a lay ministry, pastoral position, or some other arrangement such as a para-church ministry is a separate matter for the local church to decide. My hope is to persuade Christians that counseling ministry is not something the Church should outsource to the state, rather it fits squarely within the command of Paul in Galatians 6:2 to fulfill the law of Christ by carrying the burdens of one another, whether physical or spiritual-emotional.

The Church must recall that if it does not love people with the Gospel in this way, that the secular world waits with a “gospel” of its own—and its “gospel” cannot save. Paul states this more positively in Rom. 15:14, where he writes, “I am satisfied about you, my brothers, that you yourselves are full of goodness, filled with all knowledge, and able to instruct one another.”

[3] John Strelan, “Burden-Bearing and the Law of Christ: A Re-Examination of Galatians 6,” Journal of Biblical Literature 94, no. 2 (June 1975): 266, ATLA Religion Database with ATLASerials, EBSCOhost.