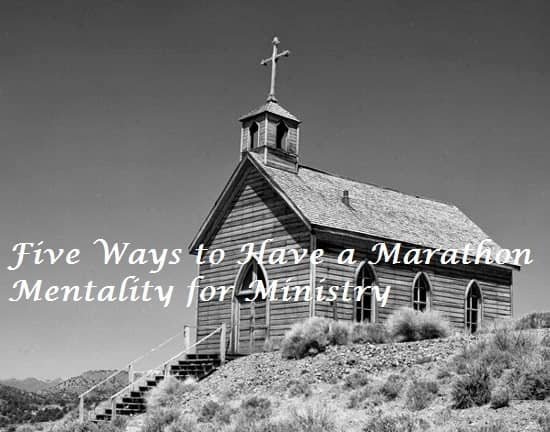 I was always better at sprinting than running long distance–back in the days when I actually ran…in high shcool. My wife, by way of contrast, was and is a marathon runner. One of the things that I’ve noticed as I have watched her run over the years is that she knows how to pace herself. I’m convinced that she runs the same speed through the entire race. There are so many illustrations that the Scriptures draw upon from the world of running to help us understand various aspects of the Christian life. So too, there are many illustrations that we can draw from the world of running to illustrate aspects of pastoral ministry.

As is true in the world of running, so too in the the world of ministry. I like to sprint. I sometimes find myself falling subject to the tyranny of bigger/faster. Many years ago, a friend and mentor, told me, “Ministry is not a sprint; it’s a marathon.” How right he was! I’ve now been in ministry for almost a decade and have seen many walk off the track after sprinting for a while. Quitting the race betrays that some of these men had wrong motives for ministry. Some were intent on making a name for themselves. They were seeking to build a corporation rather than seeking to be faithful servants of the Lord Jesus Christ who is building His Church. Others were not called into ministry by God but had slipped in through the cracks of the ecclesiastical system. The sprinting in which they were engaged may simply have been a sprinting that sought to keep up with those who were called by God. After all, when God calls men, He gifts men. Those who do not have gifts for ministry will sometimes employ whatever other gifts they have to keep up in ministry. This can all be part of a sprinting mentality.

Add to this the fact that a thousand voices have given us definitions of fruitfulness and success in ministry that come from their own personal achievements and methods rather than from God’s Word. Over time, some of them have taken themselves out of the race because they were moving too fast and getting too big for the good of themselves and the church. Roland Barnes explains the value of pacing oneself in ministry when he says, “It’s hard to derail a slow moving train.” The quicker we’re moving, the more devastating the wreckage can, and often will, be.

So, how are those of us who are given to the tyranny of bigger/faster to adjust to the need to pace ourselves in ministry? Here are five fundamental things to keep in mind:

1. Learn to be content. Contentment in ministry is a secret of endurance in ministry. Pastors must learn to be content with what hand God has dealt them. It may be that He has not called them to the influence of so many around us that we admire in public square. There is something wonderful about knowing that God has called most ministers to labor in obscurity–and there is nothing mundane about that fact. Jesus said, “He who is faithful in what is least is also faithful in much.” The Apostle Paul–who was more zealous than anyone for the growth of the Kingdom of God–wrote those all-important words, “For I have learned in whatever state I am, to be content: I know how to be abased, and I know how to abound. Everywhere and in all things I have learned both to be full and to be hungry, both to abound and to suffer need. I can do all things through Christ who strengthens me” (Phil. 4:11-13).

2. Learn to sit at the feet of Jesus. So many who are given to sprinting are also given to “a Martha spirit.” When things are not moving as quickly or as smoothly as we want, we grow frustrated. We get angry. We start to stand over Jesus and tell Him that He needs to give us others to help us serve. We start to view others as existing to serve our desires to achieve and accomplish in ministry. We need, by way of contrast, to develop “a Mary spirit.” While Martha was torn in every direction in service, Mary was sitting at Jesus’ feet and listening to His word. We need to learn to pace ourselves in ministry by learning to sit at the feet of Jesus in the Scriptures. The more our souls are being fed by Christ, the more we will be ready to serve others with the right spirit and the right pacing in ministry.

3. Learn to diligently seek the Lord in prayer. Endurance in ministry comes from seeking the Lord in prayer. When we fail to do so–and instead take matters into our own hands–it never ends well. The history of Israel’s Kings is a history of what happens when the leaders of God’s church seek Him or fail to do so. Our labors will be inevitably be frustrated when we sprint do ministry out of our own resources and efforts. The more we pull back and enter into the presence of God in prayer, the more we will be given the strength and wisdom to endure and finish the marathon. Seeking the Lord in prayer shows that we are depending on Him for the race.

4. Learn biblical measurements of faithfulness and fruitfulness. As we are so prone to forget biblical measurements of success on account of the many voices around us, we need to go back to the Scriptures and to see what is true biblical faithfulness. Consider the ministry of the Apostles in the book of Acts. Their ministries were mixed with great suffering, trial and difficulty. Whenever one church was planted–and Satan’s Kingdom took a blow–there was opposition. A biblically faithful ministry will be a ministry fraught with difficulty and spiritual warfare. A biblically faithful ministry is never an easy ministry. Great ministers throughout church history have known great difficulties. John Calvin was driven out of Geneva; nearly 2500 Puritan theologian/pastors were ejected from their pulpits in 1662; Jonathan Edwards was rejected by his congregation in North Hampton. Too many want to sprint in order to avoid the pain that comes with ministry. Too many have the idea that a faithful ministry will be a ministry loved, revered and praised by all. This is not the measurement of a faithful ministry in Scripture.

5. Learn to persevere with diligence and zeal. Pacing yourself does not mean becoming indifferent or complacent. Zeal and diligence is needed for the long-haul. Ministry is exhausting. Joseph Pipa has rightly noted that a minister’s “hardest day in seminary is easier than his easiest day in the ministry.” We must be prepared to face the hardships and trials in order to endure them with diligence and zeal. The Apostle Paul said, “It’s good to be zealous for a good thing always.” He charges believers to not be “lacking in diligence.” Surely, this is a word for ministers as well. The accomplishments of the Apostles, recorded in the book of Acts, did not happen overnight. They happened over a twenty or third year period. They endured the trials and challenges with diligence and zeal for the glory of Christ and the advancement of His Kingdom. We too need to learn to foster our zeal and diligence over the long haul. We need to learn to be content, learn to sit at the feet of Jesus, learn to seek the Lord in prayer and learn how to measure faithfulness and fruitfulness in ministry so that we can keep up zeal and diligence for the marathon of ministry.

The man of God needs to be ready for the long, hard race set before him. We need to cast off any idea that sprinting will win the race for us. “We have,” in the words of the Apostle, “need for endurance” (Heb. 10:36)–both in the Christian life and in Christian service. May God grant every minister He has called into His service a marathon mentality for HIs glory and their endurance and zeal.