Five Truths About the Wrath of God

by Joseph Scheumann | Aug 20, 2017 | The Sovereignty of God: How Suffering and Justice Meet, Featured

The doctrine of the Wrath of God has fallen on hard times. In today’s world, any concept of God’s wrath upsets our modern sentiments. It’s too disconcerting, too intolerant.

We live in a day where we have set ourselves as the judge and God’s character is on trial. “How can hell be just?” “Why would God command the Israelites to destroy the Canaanites?” “Why does God always seem so angry?”

The fact that so many people struggle with these questions, and many more like them, means that more than ever right thinking is needed about the doctrine of God’s wrath. It is needed for motivation for Christian living, fuel for proper worship, and as a toolbox to confront objections to Christianity. Here are five biblical truths about the wrath of God:

It has become common for many to argue that the God of the Old Testament is a moral monster that is by no means worthy of worship. However, biblical authors have no such problem. In fact, God’s wrath is said to be in perfect accord with God’s justice. Paul writes, “But because of your hard and impenitent heart you are storing up wrath for yourself on the day of wrath when God’s righteous judgment will be revealed” (Romans 2:5). God’s wrath, then, is in proportion to human sinfulness.

“God’s wrath is His love in action against sin.” Similarly, Proverbs 24:12 says, “If you say, ‘Behold, we did not know this,’ does not he who weighs the heart perceive it? Does not he who keeps watch over your soul know it, and will he not repay man according to his work?”

J.I. Packer summarizes: “God’s wrath in the Bible is never the capricious, self-indulgent, irritable, morally ignoble thing that human anger so often is. It is, instead, a right and necessary reaction to objective moral evil” (Knowing God, 151).

This is counter-intuitive, but hear me out. God is love, and God does all things for His glory (1 John 4:8; Romans 11:36). He loves His glory above all (and that is a good thing!). Therefore, God rules the world in such a way that brings Himself maximum glory. This means that God must act justly and judge sin (i.e. respond with wrath), otherwise God would not be God. God’s love for his glory motivates his wrath against sin. Admittedly, God’s love for His own glory is a most sobering reality for many and not good news for sinners. It is after all, “a fearful thing to fall into the hands of the living God” (Hebrews 10:31).

And can it be that I should gain
An interest in the Saviour’s blood?
Died he for me, who caused his pain!
For me, who him to death pursued?
Amazing love! How can it be
That thou, my God, shouldst die for me? 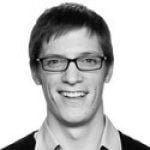 Joseph Scheumann is a graduate of Bethlehem College & Seminary. He and his wife, Martha, live in Arkansas.