Father’s Day: Experiencing Healing from Our Heavenly Father for the Father Wound

Today is Father’s Day and I’ll be sitting in my dad’s apartment in Tacoma, Washington watching the US Open with him. After that we’ll enjoy some time talking about what we’ve been busy with and chat about the latest happenings in the sports world. I’m writing this post on the Friday before Father’s Day. Tomorrow morning I’ll be driving from my home in the greater Boise area to the Greater Seattle, Washington area. By the time this blog post appears online I’ll have made it Lord-willing safely to Seattle. As I’ve reflected on this coming Father’s Day, I’ve increasingly had a burden to write about Father’s Day, what it means to me and the father wound that many are experiencing and how to experience healing from our heavenly Father.

Growing up I had an absent father. My father was always busy working hard but he was dedicated to his job and not to spending much, if any, time with his family. I was a child who experienced the “father wound”. This has been an area of ongoing healing and growth in my life. During my junior year in high school I sat in my bedroom praying and reading the Bible. The Lord convicted me that I held a grudge against my dad and needed to repent and forgive him now. The next day we took a walk and I forgave him and we were reconciled to each other. Fast forward now from 1998 to 2006. It’s been eight years since that event. My dad has been regularly attending church and we’ve been enjoying regular time with each other each week. Then, to my shock my dad leaves our family suddenly and I don’t hear from him for six and a half years. I was devastated. Once again the father wound was opened.

For six and a half years I was numb about my father wound. My wife would tell me I was angry but I think it went beyond that. I was saddened beyond belief and very disappointed in my dad. The gaping hole that was healing from my childhood was ripped wide open on Father’s Day of 2012. On that fateful Sunday, I was sitting watching the US Open before church. I went to church completely broken and sad. Little did I know at that time during that period of intense intercession and many tears for my dad the Lord would bring my dad back into my life in the next few months. When he came back I was ready and quickly forgave him and told him I loved him.

Over the past few years the Lord has continued to heal my heart. It has been wonderful to be able to call my dad again and tell him what has been going on in my life and to receive his counsel and encouragement. The past few years haven’t been easy though as my dad was diagnosed with dementia, a disease that will end up crippling him. Depending on how he is, I’ve often found that I can go from happy to sad quickly by thinking about what the disease will end up doing to him. Yet at the end of the day what I’ve been learning very slowly is that our heavenly Father longs to heal the father wound. The gospel address our brokenness and brings us to wholeness in Christ.

You may have an open father wound today. It may be hard for you to read this post like it was for me to write. As we conclude this article, I want you to understand who we are talking about when we talk about God the Father. God the Father, the first person of the Trinity, orders and disposes all things according to His own purpose and grace (Ps. 145:8, 9; 1 Cor. 8:6). He is the Creator of all things (Gen. 1:1-31; Eph. 3:9). As the only absolute and omnipotent ruler in the universe, He is sovereign in creation, providence, and redemption (Ps. 103:19; Rom. 11:36). His fatherhood involves both His designation within the Trinity and His relationship with mankind. As Creator He is Father to all men (Eph. 4:6), but He is Spiritual Father only to believers (Rom. 8:14; 2 Cor. 6:18). He has decreed for His own glory all things that come to pass (Eph. 1:11). He continually upholds, directs, and governs all creatures and events (1 Chr. 29:11). In His sovereignty He is neither author nor approver of sin (Hab. 1:13), nor does He abridge the accountability of moral, intelligent creatures (1 Pet. 1:17). He has graciously chosen from eternity past those whom He would have as His own (Eph. 1:4-6); He saves from sin all those who come to Him; and He becomes, upon adoption, Father to His own (John 1:12; Rom. 8:15; Gal. 4:5; Heb. 12:5-9).

Maybe today is a good day for you. I rejoice with you if that is the case. Yet, more than likely you are like me and have an open father wound that may or may not be healing. As we looked at just now, our Father in Heaven is gracious, kind and not like an abusive or absentee father. Our Father in heaven is faithful to His Word because His Word is tied to His character.

If you want to experience healing for your father wound, look to your Father in Heaven. His promises are sure, and His Word is yes and amen in Christ. Don’t only look at your heavenly Father though but run to Him. Run to the Father of our Lord Jesus Christ. He sent His Son so that men and women who have experienced the father wound can experience healing from our Heavenly Father. Jesus came to ransom, redeem and reconcile those who have been hurt by an absentee father. The gospel is good news because it addresses not only the problem of the father wound but provides the cure in the finished work of Jesus. Look to Jesus. Run to Jesus. He will heal your father wound. He is faithful and true to deliver on His promises for they are yes and amen in Christ. 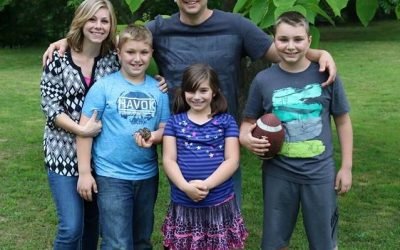 The True Meaning of Fatherhood on Father’s Day

Fatherhood is a Mirror I am not a perfect father. Not even by a long shot. If you ask my kids, though, (and we have) if there’s anything they would change about their mom and dad they would likely say, “No, nothing at all.” For that I am grateful. For that, I am...

Send Him on His Way: Sons and Vocation

Hint: Yesterday's article focused on daughters. Today's focuses on sons. But that doesn’t mean you can’t take all this stuff here and apply it to your daughter. Everything below I’ve done with my two daughters as well. Hammers, saws, guitars, drums, stethoscopes, and...

“Daddy, how do I look?” This is a common refrain of any little girl. She’ll say this after dressing up in her favorite princess dress, putting as many bows in her hair as possible, and all of the costume jewelry she can find. After having completed her adornment...