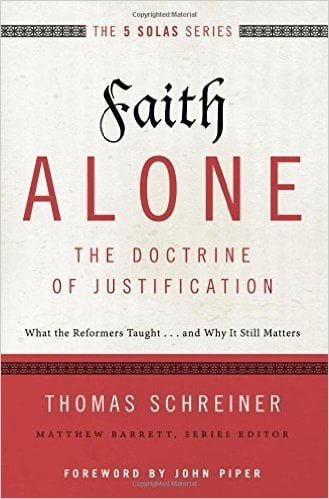 Few issues are as important to a right understanding of the gospel as justification. The recovery of this doctrine as we’ll learn in this review is critical to biblical ministry. This is why I’m thankful for Faith Alone The Doctrine of Justification: What the Reformers Taught… and Why It Still Matters by Dr. Thomas Schreiner.

This book has three parts. In part one, the author gives a tour de force throughout church history on the doctrine of sola fide. Chapter one looks at sola fide in the earthly church. Chapters two and three look at Martin Luther and John Calvin’s teaching on justification. Chapter four explores sola fide and the Council of Trent. Chapter five and six looks at the contributions of Owen, Baxter, Turretin, Jonathan Edwards and John Wesley on justification. Part two gives a biblical and theological tour of sola fide. In ten chapters this section considers sin, faith alone, faith in Jesus Christ, justification in Paul, God’s saving righteousness, righteous is eschatological and forensic, along with the righteousness of God, imputation, and the role of good works in justification. Part two concludes the book with challenges to the biblical teaching of sola fide by considering Rome and sola fide, Franck Beckwith’s return to Rome, and N.T. Wright and the New Perspective on Paul.

What is justification? Romans 4:5, “But people are declared righteous because of their faith, not because of their work.” Martin Luther said, “This doctrine is the head and cornerstone. It alone begets, nourishes, builds, preserves, and defends the church of God; and without it, the church of God cannot exist for one hour.” John Calvin said, “Wherever the knowledge of it is taken away, the glory of Christ is extinguished, religion abolished, the Church destroyed, and the hope of salvation utterly overthrown.”

You can only be made right through being justified since God is the justifier of those who believe in His sacrifice which He wrought for us on the Cross. These men of God above quoted understood well the meaning of justification having revived its meaning during the Protestant Reformation. Where justification is taught souls will be won, and hearts changed in repentance towards Christ. Justification is the ground level doctrine, the very fabric of the Church. After all, if Christ doesn’t justify us and atone for our sins, how then can we be made right with God? How can the Blood of Jesus be applied to our sins? This doctrine was so important that Jonathan Edwards said in his five discourse in the Works of Jonathan Edwards, vol 1. (Edinburgh: The Banner of Truth press, 1974), 620), “The beginning of the late work of God in this place was so circumstanced, that I could not but look upon it was a remarkable testimony of God’s approbation of the doctrine of justification by faith alone, here assereted and vindicated. The following discourse of justification seemed to be remarkably blessed, not only to establish the judgment of many in this truth, but to engaged their hearts in a more earnest pursuit of justification, in that way that had been explained and defended; and at that time, while I was greatly reproached for defending this doctrine in the pulpit, and just upon my suffering a very open abuse for it, God’s work wonderfully brake forth amongst us, and souls began to flock to Christ, as the Savior in whose righteousness alone they hoped to be justified. So that this was the doctrine on which this work in its beginning was founded, as it evidently was in the whole progress of it.”

The importance of justification cannot be overlooked. If we are not made right by the atoning sacrifice of Christ then what are we made right by? Our works? Our deeds? Our zeal? These men of God understood so well the doctrine of justification that not only did they preach it, but once they truly understood it in their hearts and thus their lives were forever changed by the glory of God’s grace.

John Bunyan in Grace Abounding to the Chief of Sinners (Hertfordshire, England: Evangelical Press, 1978; original, 1666), 20said, “I wish the reader to understand that as often as we mention faith alone in this question, we are not thinking of a dead faith, which worketh not by love, but holding faith to be the only cause of justification. It is therefore faith alone which justifies, and yet the faith which justifies is not alone: just as it is the heat alone of the sun which warms the earth, and yet in the sun is not alone, because it is constantly conjoined with light. Wherefore we do not separate the whole grace of regeneration from faith, but claim the power and faculty of justifying entirely for faith as we ought. I was all this while ignorant of Jesus Christ, and going about to establish my own righteousness, and [would have] perished therein, had not God in mercy showed me more of my state by nature… The bible was precious to me in those days.”

Faith Alone The Doctrine of Justification: What the Reformers Taught… and Why It Still Matters is an important book that will help readers understand the biblical-theological, church history, and contemporary challenges to the doctrine of justification by faith. Whether you are only casually interested in this issue or you’ve invested a lot of time in the contemporary discussion on justification, this book has something for you. I highly recommend this book for academics, pastors, and ministry leaders, and believe by reading it, readers will be oriented to where the discussion on justification is going, and equipped to faithfully proclaim the glories of justification by faith.

I received this book for free from Zondervan Academic for this review. I was not required to write a positive review. The opinions I have expressed are my own. I am disclosing this in accordance with the Federal Trade Commission’s 16 CFR, Part 255: “Guides Concerning the Use of Endorsements and Testimonials in Advertising.”