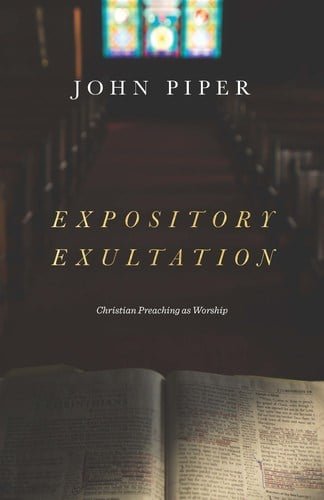 Expository Exaltation by John Piper is the final installment of a three-part series. Piper launched the series with A Peculiar Glory, which addressed the truthfulness of Scripture. Reading the Bible Supernaturally focussed on reading the Bible for the ultimate purpose of worshipping God. Expository Exaltation not only completes the trilogy – it satisfies the thirst of preachers around the world who have eagerly anticipated a new book on preaching by Dr. Piper:

“This God-glorifying, Christ-exalting, Spirit-sustained worship – expressed in worship services, daily sacrifices of love, and eternal perfection – is the goal of Expository Exaltation.”

These words encapsulate the intentions and goals of the author and alert readers to the treasure chest that lies ahead. But before he gets started, the author makes sure that readers understand the purpose of preaching:

“The purpose is that God’s infinite worth and beauty be exalted in the everlasting, white-hot worship of the blood-bought bride of Christ from every people, language, tribe, and nation.”

In a word, Expository Exultation is enthralling. I cannot overemphasize the importance of this book, which may, in the final analysis, turn out to be one of the most important books that John Piper has penned to date. Piper captures the essence of the preaching task and marshalls an army of resources to support his claims.

Expository Exultation should be read by rookie and veteran preachers alike. It should be read and re-read. Every Bible College and Seminary professor should immediately add this work to their list of required reading for preaching courses.