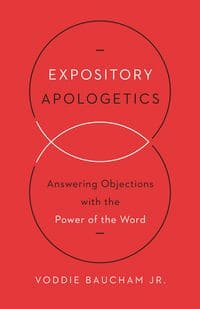 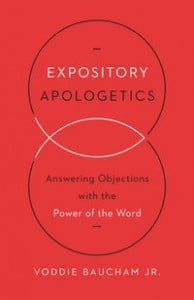 As the already post-Christian society we live in grows more post-Christian by the day, it is becoming increasingly more important that we pinpoint exactly how to defend our faith, stand for truth, and engage differing opinions lovingly and willingly in conversation. The widespread reason many of us Christians struggle to do this is, as we say, “we don’t know how.” But after reading Expository Apologetics by popular preacher and apologist Voddie Baucham, we will find ourselves eqipped and even motivated for such engagements. In this succinct and practical book, Baucham has helped us see the urgency to be apologists, and helped us with methods and practices for the battle ahead. In this book, we learn about the method of doing “expository apologetics,” a term coined by Baucham to explain his process.

There are three main ideas Baucham stresses in Expository Apologetics–being biblical, being clear, and being conversational (20). Ironically, this is the overall structure of the book. Baucham starts with a firm biblical foundation in his argument for the art of expository apologetics (chapters 1-4). He then discusses how we assimilate the daunting task of apologetics into a clear, easy to remember system for ourselves and for others (chapters 5-6). Finally, Baucham spends a great deal of time talking about how we engage in conversation as apologists (chapters 7-9).

There are a few particular chapters that stood out to me while reading. Chapter 4 is about Paul’s “expository apologetic.” Baucham essentially demonstrates how Paul is a perfect example of someone who uses this technique. Walking through predominately Romans, we see how Paul literally engages with his audience of Jews. While writing the famous epistle, he stops himself periodically to answer objections he knows his audience is bound to have. Paul then firmly refutes such objections with careful exposition of Scripture, combined with elements of logic, philosophy, and metaphor, all designed to help the audience clearly understand. Baucham sums up Paul’s apologetic ministry well here:

“Paul’s approach to apologetics was not dependent solely upon his ability to comprehend and interact with random facts. Instead, he was dependent upon God’s revelation as his primary and ultimate source of authority. Nor is this to say that there were never times when he made reference to truths  revealed elsewhere, or that we are prohibited from doing the same. However, we must bear in mind that those things must always be on the periphery of our approach to apologetics as opposed to the center. Scripture must always remain at the center” (75).

Chapter 5 is an excellent defense of the importance of creeds, confessions, and catechisms, and how they support and inform our quest for better apologetics. Baucham, a noted proponent of catechisms, has excellently demonstrated the necessity of using these tools to absorb truth and to communicate it effectively and accurately.

Finally, another highlight chapter is Chapter 8, “The Expository Apologetic Waltz.” I loved the allegory of a waltz and how it is likened to apologetics. I think it’s a great descriptor of how we actually operate in conversations with skeptics or seekers (144-145). Baucham places large emphasis on presuppositional apologetics throughout the book, and shows its importance notably in this chapter. There is even an appendix in the back that is an explicit example of how we do expository apologetics.

There has been quite a bit of writing devoted to doing apologetics, but many of them focus on specific scientific arguments or getting the right counter-punches down. Expository Apologetics, however, desires to help us understand the theological implications for why we enter this arena, and more so how to engage a culture that’s frankly growing tired of listening. I recommend Expository Apologetics to anyone trying to better learn how to share or defend their faith, and how to do it biblically.