During membership interviews at my previous church, the elders ask the prospective member to briefly share the gospel. It’s not asked as a membership test; if you forget to include Jesus’ Resurrection, you don’t fail and aren’t prevented from joining the church. The question is asked because the gospel is central to the life of Christ’s Church. Asking someone to share the gospel is an excellent way to help prioritize it while also providing the elders a chance to potentially disciple a Believer into a better understanding of why we gather as God’s people. It also serves as a way to help people develop a ,concise, yet robust gospel presentation.

The vast majority of the time, the individual displays a solid understanding of the gospel and the ability to communicate it. At times, though, one of the elders will smile and ask, “What about the Resurrection?”

“Oh, yes! Of course,” is quickly added in response.

On some occasions, a gentle nudge is needed to get them to include repentance. However, it’s understood that the exclusion of things like repentance and the Resurrection aren’t indicative of flawed or heretical theology. Nerves and being put on the spot are the primary contributors to people forgetting to include elements of the gospel.

There is one aspect of the gospel of Jesus Christ that I have found needs more than a nudge or reminder for many Christians, though. Several times over the years, I’ve found myself needing to do some actual teaching regarding the importance of Jesus’ life for our salvation. Those 30-odd years between his birth and death are an oft-forgotten aspect of the gospel.

Those are questions and thoughts that I’ve never heard asked or expressed by any Believer. I’ve never even had anyone confess to me that they’ve harbored those questions and thoughts privately. Yet, the frequent omission of the life of Christ in many Christians’ understanding and articulation of the gospel reveals that those questions and thoughts may exist at some level or other in more minds than we realize. At the least, the omission reveals that many of us have failed to adequately contemplate the role of Christ’s earthly life in the salvation of sinners. It’s important to realize that saying that Jesus came to earth to die is only partially true. He took on human flesh to live for us, too.

Living for us may be a new concept for many. Christ dying for us, though, is a well-known truth. Even if they refuse to submit to God through faith in Jesus, many non-Christians know that the Bible teaches that Jesus came to die for our sins.

And it’s true that, “as Moses lifted up the serpent in the wilderness, so must the Son of Man be lifted up (John 3:14).” Gloriously true. Graciously true. Far truer than most humans realize.

Since God is just and holy, He can’t simply excuse sin. He’s not our overly indulgent grandpa who can chuckle as he looks the other way when we swipe cookies from the cookie jar. God must punish sin because He is God. Failure to do so would create a problem for all of us because that would mean that God is not who He says He is.

So, yes, a crucial aspect of Jesus’ earthly ministry was to bear the punishment for the sins of those whom the Father has given him. And as Sunday school also taught many of us, that requires a sinless sacrifice.

Frankly, many Believer’s understanding of the importance of Jesus’ life only extends to understanding that he had to be tempted as we are and resist that temptation. As the Passover Lamb, Jesus had to be spotless and completely pure. True and true. Upon seeing Jesus, John the Baptist gave the testimony, “Behold, the Lamb of God who takes away the sin of the world (John1:29).”

Yet, Jesus didn’t just walk this earth for the years he did to be counted as sinless when he willingly mounted the cross. His active obedience was required as well before God’s people could be saved.

In his book The Work of Christ, theologian and pastor Robert Letham points out that, “Jesus’ obedience is more than simply the absence of sin. It is this, but it is much more. It is wholehearted fulfillment of the will of God as expressed in his law.”[1]

Beginning with Jesus’ role as the Son of Man, Michael Horton helps us see the reason why Jesus’ obedience to the will of God was necessary:

“The role of humanity, as understood by Israel, was to respond to God’s speech, with the reply of the covenant servant, ‘Here I am.’ It is the reply of the prophets: those who hear God’s word and then declare to it in the rib – the covenant lawsuit that Yahweh brings against his people in the great trial of history under this present age (‘in Adam’). Under the rubric of Messiah appears related designations. As the Lord’s earthly representative, the Messiah figure is also designated ‘Son of Man/Adam.’ [emphasis kept]”[2]

The first Adam was created to bring praise and glory to God through his obedience. Exercising dominion and subduing the earth were commands as much as God’s prohibition against eating the fruit from the Tree of Knowledge of Good and Evil. Adam failed, earning the punishment of death. As Paul wrote, that’s bad news for us because, “For as in Adam all die (1 Corinthians 15:22).”

The “covenant lawsuit” mentioned by Dr. Horton in the quote above refers to how humans, in Adam, fail to abide by the covenant terms of their Creator; we all fail to obey, and we will all be called to account for that failure. We will be judged by our Creator according to our disobedience. Our sins condemn us already; our lack of covenant obedience condemns us already. Citing Hebrews 10:4-7, Dr. Horton expounds, “A genuine thank offering – that is, a human life of grateful obedience – is greater than all of the bulls and goats on Israel’s altars.”[3]

Jesus lived the life of grateful obedience to God the Father that we do not and cannot live. Sin is a double-edged sword; disobedience brings a lack of obedience. During his life on this earth, Jesus fulfilled the demands of the covenant; he perfectly obeyed the will of the Father.

All of this speaks to what theologians refer to as double imputation. When Jesus was nailed to the cross, the sins of God’s people were placed on him. Our sins were imputed to him and he bore God’s punishment for those sins. On the flip side, according to Wayne Grudem, “When we say that God imputes Christ’s righteousness to us it means that God thinks of Christ’s righteousness as belonging to us, or regards it as belonging to us [emphasis kept].”[4]

Christ’s obedience is our obedience through faith. Jesus’ life, those thirty-odd years of his active obedience, his fulfilling the law, are a necessary component of the gospel. Without Christ’s obedience, we would not be able to escape that condemnation that is ours already. Our Savior’s years walking on this planet were not mere placeholders between his virgin birth and his death on the cross. Those years filled with active obedience are a glorious part of our salvation from our sins.

Thankfully, our job is simply to proclaim the gospel to sinners. It’s the Holy Spirit’s job to save them from their sins by giving them the gift of repentance and faith. And our humble, meager, and even fumbling efforts will not deter the work of the Holy Spirit, even if we forget to tell the lost soul standing before us about Christ’s active obedience.

That being said, we should strive, by God’s grace, to be as thorough and precise as possible when speaking about God, including when sharing the gospel of Jesus Christ. Don’t forget the life of Christ and his active obedience when telling sinners the good news of how they can be reconciled to God through repentance of sins and faith in Jesus.

In conclusion, because the gospel of Jesus Christ is such an important topic, I want to include what I have found to be the best short gospel presentation I’ve ever heard or read. It’s lifted directly from The Gospel & Personal Evangelism by Mark Dever, pastor of Capitol Hill Baptist Church in Washington, D.C. A short book that I can’t recommend highly enough. If nothing else is carried away from this article, I encourage you to read and commit to memory the following articulation of the gospel.

“The good news is that the one and only God, who is holy, made us in his image to know him. But we sinned and cut ourselves off from him. In his great love, God became man in Jesus, lived a perfect life, and died on the cross, thus fulfilling the law himself and taking on the punishment for the sins of all those who would ever turn and trust in him. He rose again from the dead, showing that God accepted Christ’s sacrifice and that God’s wrath against us had been exhausted. He now calls us to repent of our sins and to trust in Christ alone for our forgiveness. If we repent of our sins and trust in Christ, we are born again into a new life, an eternal life with God.”[5] 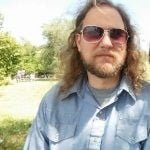 By God’s grace, John Ellis grew up in a Christian home with parents who faithfully preached the gospel to him on a daily basis. It wasn’t until John was almost 30, though, that he repented of his sins and placed his faith in the life, death, and resurrection of Jesus Christ. Nearly fifteen years later, he is blessed to serve his church family as an elder. During the day, John writes for PJ Media. From time to time, he also shares his thoughts and his story on his blog A Day In His Court. He and his wife have two children, a girl and a boy, and currently call Arlington, VA home.