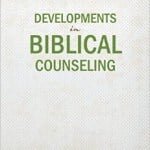 Biblical Counseling is, by all accounts, a young movement. Just barely out of its infancy it is experiencing some of the pangs of growth and maturation. J. Cameron Fraser has an earnest desire to help readers understand some of those pangs and that process of maturation. In Developments in Biblical, Counseling Fraser offers a brief survey of the movement, in order to applaud some of the changes that the second generation of counselors has made to the initial framework that Jay E. Adams developed. This is a work that will place the current Biblical Counseling culture within its proper historical context.

There are many biblical counselors, like myself, who have only come into the movement in its sort of post-Adams stage. Adams, of course, is not gone completely from the movement. He is still discussed and still respected, yet he is not nearly as influential as he once was. Many of us have come into our own counseling under the leadership of men like David Powlison and Ed Welch. Yet it is important for us to see these men in light of the history of the movement as a whole. To that end, Fraser has written a brief survey of the transitions, modifications, and nuances that have developed within the Biblical Counseling movement. It serves readers well to distinguish between the various contributions of different teachers and instructors, and the nuances of their position. He interacts with both external critics and internal revisionists to help all us think carefully about how we understand the Nouthetic model of counseling.

The book’s four chapters are brief discussions of these matters. Readers wanting a more detailed analysis will need to look elsewhere, and thankfully Fraser has granted us a good trail to follow to locate those other sources (most notably Lambert’s The Biblical Counseling Movement After Adams and Powlison’s The Biblical Counseling Movement). Yet his survey is very useful as an introduction to these matters.

His introduction gives us some good history on Adams, John Bettler, and the initial launch of what would eventually become Biblical Counseling. Again, this won’t cover everything but it does gives some major touch points to the history of the movement. Fraser discusses the initial interest, the eventual birth of Christian counseling and the waning interest in the Nouthetic approach, and then a sort of renaissance in the movement in the mid-nineties. There’s lots of valuable information here to help set the context for the rest of the work.

Chapter one dives into the foundational views of Nouthetic Counseling. Here readers will get a rough outline of Adam’s development of the approach. Issues such as the Sufficiency of Scripture, definition of the term Nouthetic, and its relationship to psychology and psychiatry are all introduced. Of particular interest and significance is O. Hobart Mower’s influence on Adams, which gets discussed some here and picked up in later chapters again. Fraser also discussed Adams’ methodology and his views on sin, suffering, and Satan which comprise his approach to counseling. These issues set-up the following chapters, which focus on critiques from without and within the movement.

Chapters two and three pick up that critique, starting with some external criticisms leveled against Adams in particular. The same headings are used as Fraser quotes from a wide array of voices who offer pushback on Adams views, those include counselors like Larry Crabb and pastors like D. Martyn Lloyd-Jones. Chapter three’s critiques come from within the movement itself, as Fraser discusses the modifications, nuances, and developments that second generation counselors have made to the approach. The two central figures in this chapter are David Powlison and Edward T. Welch, both who work at the Christians Counseling and Education Foundation. There are others who are brought into the conversation as well, such as Adams’ first colleague John Bettler, pastor Tim Keller, and Executive Director of the Association of Certified Biblical Counselors, Heath Lambert. Following the same pattern and under the same headings Fraser lists their critiques and modifications to Adams original model. The changes focus largely around an emphasis on idols of the heart, and a willingness to embrace the valid contributions of psychology and psychiatry (in so far as such contributions conform to a biblical worldview).

The final chapter explores the relationship between contemporary Biblical Counseling and the methods of the Puritans. This was a strange inclusion in this book, but it’s content was insightful. Fraser concludes that the second generation counselors are closer in approach to the Puritans than Adams, though he recognizes none is an exact replication of their methods and views.

Overall this is an incredibly informative and insightful book. Fraser is fair in his treatment of the subject and the individuals involved, often allowing Adams to give a response to the criticisms leveled against him. He offers plenty of quotations and citations to evidence his research and allow readers to trace out his work. He also has an entire post-script that, at some level, lets Jay Adams have the last word. Fraser’s sympathies lie with the so-called second generation of counselors (Powlison and Welch), but he sent a draft of this work to Don Arms, Jay’s right-hand man at the Institute for Nouthetic Studies. Don was allowed, then, to offer some push back on the various comments and criticisms leveled in Fraser’s work. As I said, it is an incredibly fair treatment of the subject and the individuals involved.

This is a good book for helping those of us who are still young in this young movement to get some perspective. There are certainly other volumes that offer more detailed analysis, yet Fraser’s work is concise, fair, and insightful. In this regard, it is a good resource for surveying the Biblical Counseling Movement. I commend it to all counselors, but especially those who have come into the movement after Adams.