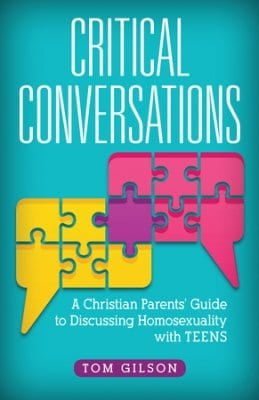 We live in a time when what once was considered right is now viewed as intolerance. Arguably, this paradigm shift in our culture is most evident when it comes to the subject of gay marriage versus biblical marriage. The recent Supreme Court decision ruling gay marriage to be legal greatly shifted the social landscape. Add to that the barrage of media attention both covering and supporting this lifestyle choice, and we are seemingly on the losing side of the argument. All hope is not lost as believers given we have confidence God is always fully in control and righteousness will win the day.

With that said, especially when it comes to children and specifically teenagers, it is vital in this environment for parents to be equipped to have the critical conversation about homosexuality, how to interact with those who oppose the biblical stance on marriage, and how to stand firm in the midst of this storm that has come upon us. Tom Gilson in his tremendously helpful book Critical Conversations: A Christian Parents’ Guide to Discussing Homosexuality with Teens, provides that needed equipping for parents.

I am the parent of a 14-year-old. She is well aware of the fact there are LGBT individuals all around. It is hard not to know given the aforementioned barrage of media attention being given to this subject. She has asked on a few occasions why the “love” two gay people have for one another is wrong. After all isn’t it their choice and isn’t love enough. Thankfully, as parents, we were able to engage such a question as we had prepared ourselves for that type of critical conversation. Unfortunately, many parents, even Christian parents, would rather just avoid speaking about this topic to their children or hope that the youth pastor brings it up sometime at youth group to get them off the hook.

Gilson rightly notes that parents have the God-given responsibility to impart truth into the lives of their children. Thus, we need to understand the landscape our children live in and furthermore, we must ensure they interact with LGBT individuals in a spirit of truth and love, understanding that on most occasions, their belief system in biblical marriage will be reviled.

In Critical Conversations, Gilson first establishes how we go to this point with a brief history lesson on the LGBT movement. He then establishes the biblical framework for marriage and builds on that framework and history as well noting the “common human experience” that marriage between a man and a woman is the best approach for society and to raise children.

With that as a solid foundation, Gilson then outlines how parents should teach their children when it comes to engaging those who take a different view on marriage. We should always stand for truth and Gilson aptly reminds the reader of that important fact. He also saliently avers the need for a listening ear, a warm embrace, and a spirit of love with those who embrace the LGBT lifestyle. Gilson comments that a listening ear does not mean acceptance of that lifestyle. It simply means we are showing humanity and rejecting the incorrect stigma of homophobia often attached to those who affirm biblical marriage.

Part three of this book is where the real rubber hits the road and is I believe the best part. Gilson addresses a plethora of winsome arguments that can be presented to the challenges against the biblical position on marriage. He covers most all if not all the major talking points from the LGBT community and those who support that lifestyle. The proposed responses follow the guidelines he gave in Part 2 when he reminded the reader of the need to speak the truth but to do so in love. Parents should spend a great deal of time in Part 3 and after doing so, the next step is to then spend time with your children discussing these important responses.

In my humble opinion, this is a must read for all Christian parents. Do not abdicate to the youth pastor the responsibility of having the needed critical conversation with your children about homosexuality. Spend time with them in Scripture. Use this book as a helpful guide. Empower them (and yourself) to be able to respond with a biblical apologetic on marriage that is winsome, truthful, spoken in love, and that destroys the incorrect notions and labels being spouted against those who affirm biblical marriage.

I received this book for free from Kregel Publications and the opinions I have expressed are my own. I am disclosing this in accordance with the Federal Trade Commission’s 16 CFR, Part 255 : “Guides Concerning the Use of Endorsements and Testimonials in Advertising.”