I’ve spent the last couple of weeks decorating our hallway and stairs. It’s been a tiring job, but the result is incredibly satisfying—especially because it looked so bad before I started. Typically, we only truly appreciate the new and improved “after” when we’ve experienced the inadequate and dissatisfying “before.”

In the second half of Romans 5, Paul uses a series of contrasts between Adam and Christ. His goal is to show that Christ’s obedience is far greater than Adam’s disobedience; that it is powerful enough to overcome the consequences of Adam’s sin. In verses 18 & 19, he summarises his argument and explicitly states the destiny-changing consequences of Adam’s disobedience and Christ’s obedience for those who belong to each of them. We get to see both the “before” and “after” of our life in Christ. As we consider these verses, they should lead us towards deeper humility and greater assurance.

Paul returns to the comparison he started in verse 12: one man’s sin resulted in condemnation—death—for all people. As the head of humanity, what is true for Adam is true for each of us. We inherit his sinful nature. It’s not simply that we follow Adam’s example in trading God’s rule for self-rule—although we do. And it’s not only that his sin is attributed to us because he is our representative. Rather, our human nature changed as a result of Adam’s sin. We became sinners—unable not to sin. We may like to think of ourselves as good people who sometimes “slip up,” but that’s just not true. We are sinful people who, because of common grace, sometimes do right.

This is a humbling truth. We are sinful at our very core—and there is nothing we can do about it. However hard we may try, we cannot change our nature. We can’t “unbecome” sinners, and we can’t avoid sin’s consequences. Our condemnation comes not from what we do but from what Adam did. His trespass resulted in a change in human nature and condemnation for all people. But while this truth humbles us, it doesn’t leave us hopeless. Adam’s sin doesn’t have the last word.

Just as Adam’s trespass resulted in condemnation and death for all people, so Christ’s righteous act resulted in justification and life for all who are in him. At first glance, it may appear that Paul is saying all those condemned by Adam’s sin will be justified by Christ’s righteousness, but that’s not what he has been arguing throughout the passage—or in the earlier part of the letter. No, Paul wants to show that we can be just as assured of justification and life in Christ as we were assured of condemnation and death when we were in Adam. Christ’s righteous act is sufficient to secure righteousness for all who belong to him—’those who receive the abundance of grace and the free gift’ (v 17). The consequences of Adam’s sin are far-reaching—it impacts all humanity without distinction or exception. But Christ’s righteousness reaches just as far—he gives life to all who receive him (John 1:12).

All of us belong to Adam or Christ, and our destinies are determined by our actions. Those who belong to Adam live under the sentence of death because of Adam’s sin. But those who belong to Christ can be certain of eternal life because of his righteousness. Both Adam’s act of sin and Christ’s act of righteousness are eternally significant, but Christ’s act is far more powerful because it can overcome the consequences of Adam’s sin.

Paul fills out the details of these acts in verse 19. Adam’s trespass was not an accidental “slip-up” but a conscious act of disobedience. When Adam and Eve ate from the tree of life in Eden, it was a deliberate act of rebellion against God’s command. In contrast, Jesus lived a life of obedience, culminating in his obedient death on the cross (Philippians 2:8). Adam disobeyed by eating from a tree; Christ obeyed by dying on a tree. Adam’s disobedience made us sinners—both in our status before God and in our nature. But Christ’s obedience guarantees that all who are in him will be made righteous—in our status before God and when the Spirit completes his work of sanctification in us at glorification at death.

It is humbling to grasp that this righteousness cannot be obtained through our own obedience (even if we could obey fully) but through Christ. Because our condemnation comes not simply from what we have done, but from what Adam did, so too our justification must come not from what we do but from what Christ—our new representative head—has done in His finished and sufficient work. We may be tempted to think that we can make peace with God by our own acts of righteousness, but Paul wants us to see that we are helpless sinners who must depend on the righteousness of Christ as our only hope of salvation.

But it is also gloriously assuring. In Christ, we are transformed from one humanity to another—there has been a change in our spiritual DNA. Even though we continue to sin in this life, our new status is irreversible. We are considered righteous—acquitted of all charges of disobedience. Christ’s obedience has secured our justification. His Spirit enables us to live out our righteousness as he transforms us day-by-day into the likeness of Christ. And one day, his work will be complete. We will live sinlessly forever—with our Champion and all who have been transformed from one humanity to another. 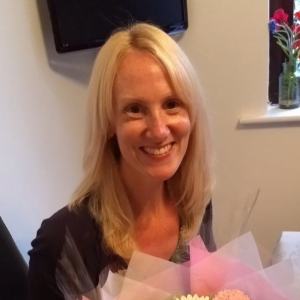 Carolyn lives in Worcester, UK with her husband Richard and 2 teenage children. Richard is the lead pastor of Woodgreen Evangelical Church, and Carolyn serves alongside him running the women’s ministry and music ministry teams. She loves teaching the Bible to women at conferences, 1-2-1, and in bible studies. In her spare time, she enjoys writing, running, and reading historical fiction.