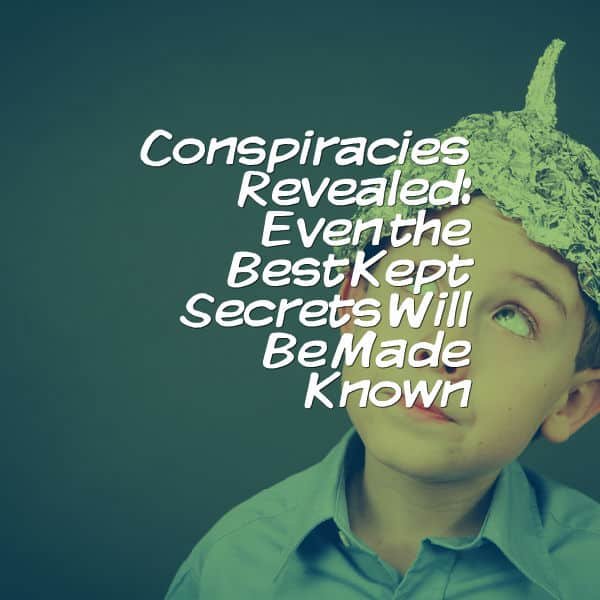 Conspiracies Revealed: Even the Best Kept Secrets Will Be Made Known

I love a good conspiracy documentary, book, conversation, or movie. There is something about trying to uncover that secret government or worldwide plot to take over the world that is appealing to me. Be it the Illuminati, the Bilderberg Meetings, what takes place at those Bohemian Grove gatherings, or what exactly Area 51 is or isn’t all about makes for some great reading and television programming – at least in my humble opinion.

As I spent some idle time recently while on vacation watching episodes from The History Channel’s series “America’s Book of Secrets”, I was reminded of the words of Jesus in Luke 8:17. Regardless of what may at the time seem like a giant secret being kept from the masses, there is one day when everything will be made manifest. All those secrets people thought they had kept perfectly hidden from peering eyes will be made known and will come to light.

Now think about that for a moment. While most of us I would submit are not involved in any secret governmental conspiracies to take over the world, every one of us harbors areas of our lives we think can be kept from being discovered – those pet sins and things we hold dear that have not been given up to God. There was a man named Achan way back in the book of Joshua who thought he could hide some of the spoils of war from God; however, his sin was found out. In fact, his private sinful act became exposed to the entire people of Israel with disastrous consequences.

There very well may be a group or groups of people trying to maneuver world events in their favor. Quite frankly, I would not be surprised as there have always been individuals who have thought they could thwart the divine plans of almighty God. For a time, it may even seem like their plans are coming to fruition.

Many times in the Psalms we read of the Psalmist asking God why the plans of the wicked seem to prosper. However, the Psalmist always recognized that God is fully in control. What may appear as successful posturing against God by the wicked is nothing more than chaff which in God’s perfect timing will be blown away, proving their plans to be nothing.

If we bring this home a bit to our personal lives, all those parts of our life we like to keep hidden will one day be revealed under the microscope of God’s scrutiny. As believers, those sinful patterns are covered by the shed blood of Christ.

With that said, we need to remind ourselves that nothing is hidden from the eyes of God. If there are areas of your life you are hiding from others, be mindful you are not fooling God one bit. It is high time we quit the conspiracy, thinking we can outmaneuver God and is its past time to be giving those areas of our lives up to God. Dig deep into the Word of God and the Holy Spirit will root out those hidden areas of your life.

While I love a good conspiracy, there is nothing hidden from God. He will reveal and make manifest all those things everyone throughout history thought they had nailed shut. We all have areas that we like to keep quiet about. If that is you today (and it is), go to God in prayer. He already knows those parts of your life and is looking forward to having a conversation with you about those areas because He loves you, He wants to rid you of those issues as He guides and molds you through the sanctifying work of the Holy Spirit into Christlikeness.