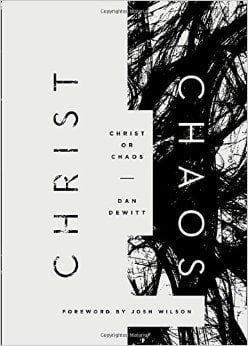 Fundamentally, all worldviews are based on a set of assumptions. When it comes to atheism and its backbone theory of evolution as compared to Christianity and its backbone of a belief in the truth of Scripture, those aforementioned assumptions are vital in assessing the validity of the claims made by each position. In his book Christ or Chaos, Dan DeWitt presents a conversation taking place between two fictional yet true to life individuals, an individual named Thomas, one who affirms a belief in Scripture but is finding his faith challenged by his friend Zach who once affirmed a belief in God but is increasingly moving towards an atheistic worldview. This conversation serves as the springboard by which DeWitt examines which position deals best with the realities of life.

Despite its relatively short nature, this book packs a giant punch in the information department. I have read a number of books, many of great length that address issues such as origins, the problem of evil, and how we address issues of morality. While many of those books were quite scholarly in nature and did an admirable job of dealing with the issues, I found DeWitt’s effort to be just as impactful. He does not spend a lot of time beating around the proverbial bush as he discusses how atheism and Christianity deal with matters of life.

The chapter, in particular, stood out to me was DeWitt’s discussion of the problem of evil. The problem of evil is an especially thorny topic and DeWitt readily admits he does not have the silver bullet answer to dispel all arguments against the theistic worldview. His focus is simply to note that subsumed within the biblical perspective on evil is the entire construct of how things were in the beginning, what went wrong, and arguably the most important element, the solution to the problem of evil. DeWitt aptly notes that all the naturalistic perspective can provide is that chance is all there is and at some point, death will come and it will all be over. This is not exactly a comforting perspective. He saliently declares “the Christian narrative is big enough to fit in the problem of evil. The atheistic story, guided by chance, will forever be incapable of doing so.”

Furthermore, when it comes to how we approach evil, if chance is all there is to offer as a “solution”, then it is somewhat disingenuous to describe for instance the actions of terrorists as evil. What is evil and how is it defined within the naturalistic construct? The resounding silence to such a question is rather telling. The biblical worldview understands that sin is the cause of evil, specifically man’s penchant for disobeying God’s commands to love Him and others which result in man’s inhumanity to his fellow man. We understand the reality of suffering, knowing that God has declared there will one day be an end to this madness. This provides hope in the midst of chaos. As DeWitt rightly avers, all naturalism has to offer is chaos with no semblance of hope for its adherents.

Christ or Chaos. It really is a simplistic profundity to suggest there are only two viable options. DeWitt does a marvelous job of laying out the landscape and engaging the relevant questions. If I were Thomas and were able to get my hands on this book, I know I would be very well prepared to discuss with my friend Zach that Christ is the only answer. Thus, I highly recommend this book for all believers as we all have a friend or someone we will run into in life who is like Zach.