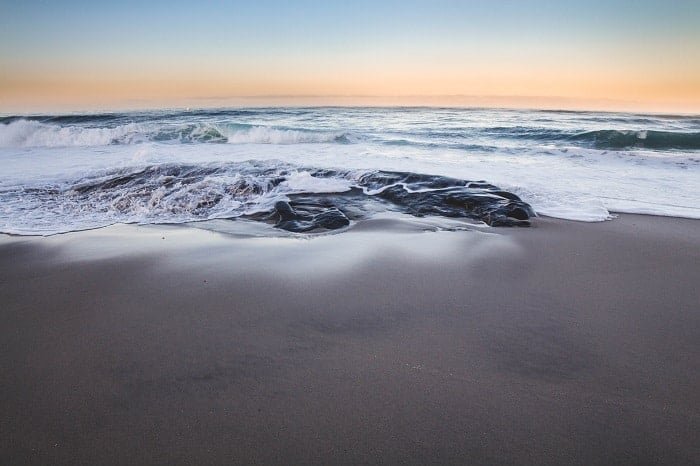 Not too long ago I was reading from Ezekiel 47 where God is giving Ezekiel a vision of the temple, and the LORD brings him to the door of the temple and shows Ezekiel flowing water.  Here is how Ezekiel records what he sees:

“Then he brought me back to the door of the temple, and behold, water was issuing from below the threshold of the temple toward the east (for the temple faced east).  The water was flowing down from below the south end of the threshold of the temple, south of the altar.  Then he brought me out by the way of the north gate and led me around on the outside to the outer gate that faces toward the east; and behold, the water was trickling out on the south side.  Going on eastward with a measuring line in his hand, the man measured a thousand cubits, and then led me through the water, and it was ankle-deep.  Again he measured a thousand, and led me through the water, and it was knee-deep.  Again he measured a thousand, and led me through the water, and it was waist deep.  Again he measured a thousand, and it was a river that I could not pass through, for the water had risen.  It was deep enough to swim in, a river that could not be passed through.  And he said to me, “Son of man, have you seen this?”  Then he led me back to the bank of the river.  As I went back, I saw on the bank of the river very many trees on the one side and on the other.  And he said to me, “This water flows toward the eastern region and goes down into the Arabah, and enters the sea; when the water flows into the sea, the water will become fresh.  And wherever the river goes, every living creature that swarms will live, and there will be very many fish.  For this water goes there, that the waters of the sea may become fresh; so everything will live wherever the river goes.  Fishermen will stand beside the sea. From Engedi to Eneglaim it will be a place for the spreading of nets.  Its fish will be of very many kinds, like the fish of the Great Sea.   But its swamps and marshes will not become fresh; they are to be left for salt.  And on the banks, on both sides of the river there will grow all kinds of trees for food.  Their leaves will not wither, nor their fruit fail, but they will bear fresh fruit every month, because the water for them flows form the sanctuary.  Their fruit will be for food, and their leaves for healing”(Ezekiel 47:1-12 ESV).

I was enamored and encouraged by this vivid picture, and I jotted down a few notes about this vast  river God showed Ezekiel:

When you read passages like this, it’s always helpful to ask questions: Why must we know about this river? Why does God give Ezekiel this vision? Where can I find a river like this and what must I do to swim in it?

Look with me, at John chapter 4. The immediate context you will find familiar.  It’s Jesus’ encounter with the woman of Samaria at the well:

“A woman from Samaria came to draw water. Jesus said to her, “Give me a drink.” (For his disciples had gone away into the city to buy food.) The Samaritan woman said to him, “How is it that you, a Jew, ask for a drink from me, a woman of Samaria?” (For Jews have no dealings with Samaritans.)  Jesus answered her, “If you knew the gift of God, and who it is that is saying to you, ‘Give me a drink,” you would have asked him, and he would have given you living water.”  The woman said to him, “Sir, you have nothing to draw water with, and the well is deep. Where do you get that living water?  Are you greater than our father Jacob?  He gave us the well and drank from it himself, as did his sons and his livestock.”  Jesus said to her, “Everyone who drinks of this water will be thirsty again, but whoever drinks of the water that I will give him will never be thirsty again.  The water that I will give him will become in him a spring of water welling up to eternal life.”  The woman said to him, “Sir, give me this water, so that I will not be thirsty or have to come here to draw water…” (John 4:7-15 ESV).

Jesus is the ultimate fulfillment of Ezekiel 47:1-12. Jesus is the inexhaustible living water that produces life and fruit. I would challenge you to go back and reread the Ezekiel passage with the context of John 4 in mind.

I love John 4. It demonstrates just how far the living water; Christ, reaches. Christ interacts with a Samaritan at the well. Even more so, He interacts with a woman which was uncommon for Jews. Even more than that, she had five husbands and is living with a man who is not her husband (V17-18)! Christ brings living water to this undeserving sinner.

You and I are the adulterous Samaritan woman in desperate need of the living water. I’m thankful that the gospel reaches far, wide and deep. I’m also thankful that Christ saves the chief of sinners (1 Timothy 1:15). The question now is, “Are you drinking from the shallow well or the thirst quenching well of Christ?”