Cast Out the Slave Master

Galatians 4:28-31, “28 Now you, brothers, like Isaac, are children of promise. 29 But just as at that time he who was born according to the flesh persecuted him who was born according to the Spirit, so also it is now. 30 But what does the Scripture say? “Cast out the slave woman and her son, for the son of the slave woman shall not inherit with the son of the free woman.” 31 So, brothers, we are not children of the slave but of the free woman.”

No, not sin. The other slave master, Law. Continuing his allegorical reading of the Sarah and Hagar narrative—and the stories of their children Isaac and Ishmael—Paul now raises the stakes quite dramatically. Will they live as children of the promise that they are, or will they continue to enslave themselves to the Law that Christ died to free them of? Paul’s audience has been seduced by the law, “deserting him who called you in the grace of Christ” (Gal 1:6). They’ve abandoned the gift of grace in favor of an up-by-the-bootstraps faith in obedience to the law. Rather than relying on the grace of God in Christ, they’ve taken to relying on their ability to keep the law, the very law that Paul himself professed to have kept, save for the one thing he couldn’t not do—covet (see Rom 7).

I understand the Galatian tendency. I would much rather like to be in a place of power than in a place of reliance. I’d rather say that I earned my salvation through law keeping than admit there was nothing I could do to earn God’s favor. But that’s not the gospel at all. No, that’s my sin nature, inherited from my parents when they ate the fruit of the tree of the knowledge of good and evil. And Paul is right, obviously. What Adam and Eve and I and the Galatians took to be freedom, whether the freedom to eat or the freedom to keep the law, is not freedom at all. Rather, it’s submission to the slave master.

So rather than follow in the footsteps of the Galatian Christians by taking on Ishmael’s identity, let’s follow Paul and remember that we “are children of promise.” Let us not return to life as slaves, for God in Christ has made us, once children “born according to the flesh,” now “children of promise.” “We are not children of the slave but of the free woman.” Paul will get into what exactly this freedom means in the following chapter. Today, though, let’s think about his statement that his readers—and by extension we—are “children of promise.”

First, being a child of promise means that we didn’t do anything to receive what we have received. Isaac did not gain favor with God through his good deeds or his ability to keep the Law. There was no Law then! God favored him because God chose to favor him. It’s as simple and wonderful and strange as that. A frequent conversation in my house goes like this:

Do you know that I love you?

Do you know why I love you?

Because I’m your son!

I want my sons confident with the truth that they are deeply loved for no other reason than existing. They are my sons, therefore they are loved. Come hell or high water, nothing will keep them from being loved. And I’m just a human giving human love to my kids. How much more so God to his children! It’s unfathomable. Being a child of promise means being loved.

Second, being a child of promise means that we are in right relationship with God. In Christ, God loved me just as much when I was passed out drunk on the front porch in the middle of November as he loves me sitting here, writing about his holy Word. That one is tough to get my mind around, but it’s true nonetheless. His pleasure in me has nothing to do with me and everything to do with Christ’s work on my behalf. Nothing I can say or do “will be able to separate [me] from the love of God in Christ Jesus our Lord” (Rom 8:39).

So, friends, as we think about what it means to live the Christian life and walk uprightly with God, let us be ever mindful to avoid taking upon us the shackles of the Law. With Paul and his Galatian readers, let’s remind ourselves that there is nothing we can do to earn God’s favor and there’s nothing we can do to lose it. We “are children of promise . . . not children of the slave but of the free woman.” 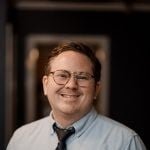