Jenn Greenberg was abused by her church-going father. Yet she is still a Christian. In her courageous, compelling book Not Forsaken, she reflects on how God brought life and hope in the darkest of situations.

For a long time, I kept that Mother’s Day card blank, and folded between the pages of my Bible; the constant reminder of a broken past. I’d intended to send it before everything went wrong; before it would have seemed ironic, disingenuous, or even mocking. Few people talk about the collateral damage of abuse. A family is like an interwoven tapestry. Tear out the threads of an abuser, and the whole fabric is liable to unravel. The innocent suffer along with the guilty, because heartbreak has a blast radius that devastates relationships and spans decades.

Even during my childhood years, I searched for parental figures in other adults. I didn’t understand what I was doing at the time. I was fumbling in the dark for a thing I didn’t know I didn’t have. Around the age of 11, I remember befriending a neighborhood lady who taught me to sew and enjoyed listening to me chatter. I remember lining up after Sunday service to talk to pastors and elders who seemed kind and patient.

For years I thought I was the only daughter in our family being abused. I knew my younger siblings had seen my bruises. I knew they’d witnessed him throw me, shake me, and irately degrade me. But as a child myself, I didn’t understand that witnessing such acts was abuse of them too. I thought if I endured and held us together, somehow things would get better, and I prayed he would change.

One evening, when I was 20, still living at home (much to my dismay), one of my little sisters took me aside. She said she’d walked in on dad with his porn, and she feared he’d wanted her to see him like that. Immediately, I knew, things were escalating. In just a few months, I was going to be married. I was taking away his main target; the primary focus of his rage and lust, and I was worried my sister would take my place when I was gone. There was no way on earth I was about to let that happen.

I Had to Steal His Gun

That night, I wrote my dad a letter. That may sound anticlimactic, but a letter was much safer than a face-to-face confrontation. I demanded he tell our mother about his pornography. I demanded he seek marital counseling and address his violent temper. I demanded he talk to our pastor and have the church hold him accountable. If he did not, I said, in one week I’d tell mom everything, and if he lashed out, I’d call the police. It was around this time that I stole his gun. I hid it in my closet so he couldn’t do what he’d threatened several times, and shoot me for talking.

On Saturday morning, I put the letter in his bicycle helmet by the back door, and sat down at the kitchen table to make sure he opened it. He found it alright. He read it expressionlessly. Then he folded it back up, threw it in the trash, and went on his bike ride. He never said a word. For a week he pretended as if nothing had happened.

All pretense of normalcy in our home disintegrated. It was like I’d triggered a slow-motion implosion. Truth had been spoken, and we could not go back.

A few months later, I got married. And my parents got divorced. A few years later, I decorated my baby’s nursery. And they battled on and on for custody of my siblings. Relationships grew strained and complex. The emotional fallout was a painful conglomeration of depression, anxiety, denial, and anger. We each were swallowed alive by our own expression of grief. One person’s rage triggered another’s anxiety. Trauma clashed against trauma, perpetuating pain. At times I felt loved and appreciated for what I’d done. Other times I was accused of betrayal and called a liar.

During my early marriage, my yearning for parental figures reached a feverish pitch. I befriended older women at church, but eventually things would become awkward and fall apart. I’d confide some dark secret from my childhood, and she’d look aghast and stop associating with me. I think people felt overwhelmed and disturbed by my pain. They didn’t know how to help me, so they didn’t help me at all. My fear of abandonment and my instinct to distrust were validated repeatedly by those who seemed kind yet were repelled by my pain.

I longed for a parent who was loving and understanding. Someone who would listen and not look at me like damaged goods. I wanted a role model who would help me straighten out my life, rearrange my priorities, realign my perspective, and help me get onto a healthy spiritual track. I wanted someone to take pride in my accomplishments, to love my children, and build me up as a wife and mother. I wanted someone to enjoy spending time with us, whether it be laundry day or Christmas morning.

Since I didn’t have a blueprint for how a healthy marriage worked, and I felt unqualified to conceptualize good parenting, I looked to Jesus as my role model. I tried to shape my behavior and relationships after his. I prayed for my husband and sought to build him up. I listened when he counseled me, and to my amazement, found that he was interested in my counsel as well. I was meticulously careful never to punish my kids in anger. I listened to their worries, and stories, and dreams. When I sinned, I apologized. When I messed up, I sought to make amends. I fervently prayed God would give my daughters faith.

Then one day I found my three-year-old coloring at the kitchen table.

I looked, and there it was. The card I’d originally intended for my mother, now decorated with stick figures, scribbles, and childish letters. Initially I felt a pang of dismay. Then I realized, the card she has repurposed for me. There was no more need to search or yearn; to fill that gaping hole of frantic need.

By God’s grace, and with the help of my husband and pastors, I had become a mother who was strong and compassionate. Not perfect, of course, and always a work in progress—but yes, I was the guardian, the confidant, the caretaker for my kids that I’d longed for for myself. Through the work of God’s Spirit, I was able to be the parent I’d always searched for, but never dreamed I could find, let alone be. And something about that knowledge – something about showing love to a little girl who was innocent and impressionable as I had once been – gave me a much-needed peace and long-sought closure. Thanks to God, I had kept my faith. Thanks to him, I had a family and I had a home. Thanks to him, I am the daughter of a heavenly Father, and I am the parent I never had.

Editors Note: If you enjoyed this article, we encourage you to check out Jenn’s new book Not Forsaken: A Story of Life After Abuse: How Faith Brought One Woman From Victim to Survivor (The Good Book, 2019) by Jennifer Michelle Greenberg. 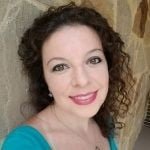 Jennifer Michelle Greenberg lives in Texas with her husband, Jason, and their three young daughters. She is a writer and a recording artist.