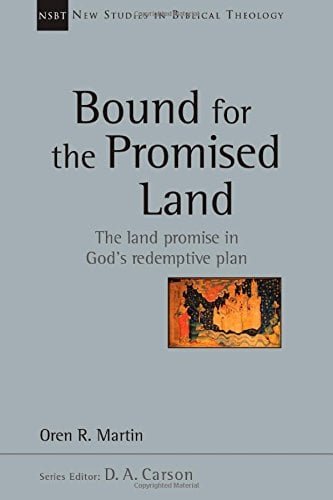 What makes InterVarsity Press’ series New Studies in Biblical Theology such a success? It is their ability to recruit good authors and researchers to draw out often-overlooked themes that are actually significant points of discussion in the Bible, helping readers see God’s Word as telling one story from Genesis to Revelation. I am grateful for this series and grateful for the present volume Bound for the Promised Land: The Land Promised in God’s Redemptive Plan written by Dr. Oren Martin, professor at Boyce College.

Martin sets forth the purpose of this volume succinctly in the first chapter: “This study will demonstrate how the development of the land promise across the canon provides hermeneutical warrant to see its ultimate fulfillment in the new creation won by Christ” (27). From Eden to the New Earth, Martin sees the land promise as an important topic of conversation, with the Promised Land serving as a sort of connector between the beginning and the end.

In the first two chapters, Martin presents the broad brushstrokes for what is to come in the remaining chapters. In a conversation on the land promise, it is important for Martin to first spend time discussing the “kingdom of God” and how this kingdom is central to God’s plan of redemption in the world. He shows that “the beginning, middle and end of the biblical story describe the teleological design of God’s people in his place under the rule” (58-59). He weaves the theme of kingdom and land through each of the commonly understood biblical covenants, with his main takeaway that God is “reestablishing his kingdom through covenant” (42). He begins to dive deeper into the relevant passages, from Genesis to Revelation, beginning in Chapter 3.

In the chapters that are to follow, Martin has given us a thorough understanding of how the land promise has become a typology of sorts, escalating and growing toward its fulfillment in Christ. I think there is widespread affirmation over what Martin has to say in his treatments on the Old Testament portion of Scripture. Some may, however, have a more difficult time seeing how he traces this “land promise” theme in the New Testament. Thankfully, Martin’s work on how the land promise has played itself out in the New Testament is actually very informative. In Chapter 7 he spends time unpacking Matthew’s genealogy, the Beatitudes, and Jesus’s famous discourse on the vine and branches, all of which may not normally readily present the land promise to the reader, but make great sense given this context. He also consults Paul and, of course, Revelation, to end the book with a clear line drawn from Eden to the New Earth.

As with any NSBT volume, this book will help you gain a much broader, connect-the-dots understanding of the themes of Scripture from beginning to end, and Martin’s work on the land promise in God’s redemption story is great material. I wish the “Theological Reflections” chapter had been a little longer, as I think there could have been much to say about the implications of these findings. With that said, it is still a solid summary of Martin’s theological propositions. It is a worthy addition to the NSBT series. You’ll be glad you picked it up.