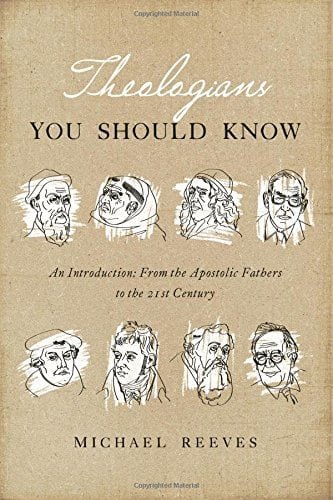 As a self-titled book nerd and Seminary survivor, I can humbly state there are many, many theologians for which I have at least a passing familiarity. It seems everyone gravitates towards certain scholars/theologians for a variety of reasons ranging from the subject matter that formed the locus of the author’s writings, to perhaps the way the theologian framed their points. Given the wide range of individuals, one can rightly claim they had a lasting influence and thus should be paid attention to, even though it is somewhat difficult to narrow down the list to a select few. Michael Reeves takes a stab at doing just that in his informative book Theologians You Should Know.

Over the course of thirteen chapters, Reeves explores the lives and thought of some top notch and very influential theologians. He begins his investigation by looking at the Apostolic Fathers. For those not familiar with who the Apostolic Fathers are, they are the individuals that immediately followed the Apostles who wrote and ministered from the end of the first century to the middle of the second century A.D. Polycarp, a disciple of the Apostle John is arguably one of the most well-known figures in this period.

Next on the list is Justin Martyr and Irenaeus, two men who lived, wrote, and ministered during the tumultuous period of the latter half of the second century A.D. Reeves aptly notes the various heresies these men battled against during this period, perhaps most notably Gnosticism. I appreciated the fact Reeves shares some free tools by which to engage the writings of Justin Martyr and Irenaeus as well as providing some other helpful resources such as the venerable Ante-Nicene series as well as some other works by authors who specialize in areas of these men’s works.

Reeves also explores the life and writings of men such as Athanasius, Augustine, Anselm, Aquinas, and well-known theologians such as Luther, Calvin, Owen, Edwards, Barth, and J. I. Packer. I would submit that outside of Athanasius, Anselm, and perhaps Barth, most are at least somewhat familiar with this group of men. One person whom Reeves discusses I believe many are not familiar with and who had a noted influence is Friedrich Schleiermacher, a man often known as the father of theological liberalism.

Schleiermacher was a well-written theologian, penning works on the writings of Plato, preaching numerous sermons, writing New Testament studies and various texts on hermeneutics to name just a few of his achievements. Reeves rightly notes that many have a hard time trying to figure out Schleiermacher and after reading the chapter on him, I can see why there is so much difficulty understanding exactly where he stood on many theological topics. I am not sure I will make the effort to dig into the works of Schleiermacher in the near future, but if I do, I will definitely start with the primer Reeves has provided as otherwise, I would be quite lost on the basics of Schleiermacher’s positions on Scripture.

If you have a desire to obtain a quick yet helpful grasp of where some of the great theological minds from the first century A.D. to the present stood and the period in which they lived, wrote, and ministered, then I highly recommend Theologians You Should Know by Michael Reeves. Once can certainly argue their case that others could or should have been included, but I think Reeves did a great job with his selections. This book is informative, is full of valuable information, provides helpful timelines and suggestions for further study, and thus is a book I know I will return to in the future should I need some tidbits of information on these men. Check it out. I think you will enjoy learning about these particular theologians. This book might just whet your appetite for further study on one or all of these important figures of theology.