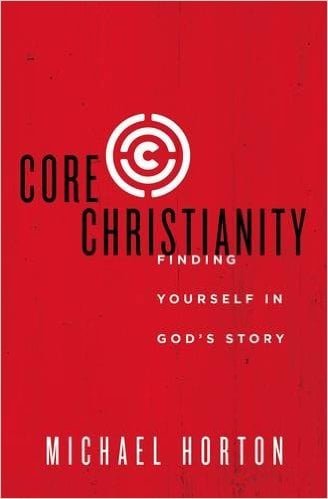 The core roots of the faith. What exactly are they and why are they considered as the foundational elements of belief as opposed to other issues? Furthermore, what are we supposed to do with what is determined as the core facets of the faith? These are vital questions to answer in a time when it seems so many continue to struggle with understanding what belief in God and the application of that belief is all about. Michael Horton, in his helpful book Core Christianity: Finding Yourself in God’s Story, seeks to answer these questions, focusing not just on the core roots themselves, but more importantly, how we are to relate these roots to our daily life.

There have been a few “roots of the faith” books I have come across over the years that have done an excellent job of presenting what most should agree are the core tenets of belief in God. Books such as John Stott’s Basic Christianity and C. S. Lewis’s Mere Christianity are a couple popular titles that have attempted to address core elements of the faith. Horton suggests theology and the faith can be broken down into four D’s, namely drama, doctrine, doxology, and discipleship. He expounds on these four D’s throughout the book, saliently outlining for the reader how we can best understand and apply grand theological themes such as justification, sanctification, law, grace, relationship, restoration, and redemption to name a few.

I found this book to be very well-written with Horton’s apologetical arguments presented in a manner that makes this book useful that both seasoned believer and those who are new to the faith will find it quite useful. Horton interacts with some basic and some scholarly theological concepts. For instance, he discusses the aseity of God, a term most believers who do not spend much time digging through dusty academic style texts are likely unfamiliar. Even with a “nerdy” type theological term such as aseity, Horton does a marvelous job of explaining difficult yet important terminology in a way all will appreciate.

This is a book that will quite honesty whet your appetite to dig into theology more and more. Horton does not cover in depth all of the four D’s but that is not his intent. To dig thoroughly into those four main issues of the faith would take a library full of volumes and even then one would only scratch the surface. Horton’s purpose in this book is to present the core tenets of the faith so the reader will better understand what God is revealing in His Word to His people. The goal of this book, one which Horton meets quite well, is to unpack ideas with the hope that the reader will further explore them as they continue to mature in the faith.

This is a book I can highly recommend. It is a great work to hand out to the new believer or even for the seasoned person in the faith to revisit some of the fundamental aspects of what they believe. I came away after reading this book with a few more tidbits of information on even some subjects which are favorites of mine and for which I have spent a great deal of time studying. If anything, this proves there is always something to learn and I firmly believe Horton’s book will be a great asset to your journey through Scripture and in applying its timeless core truths to your life.

I received this book for free from Zondervan Academic and the opinions I have expressed are my own. I am disclosing this in accordance with the Federal Trade Commission’s 16 CFR, Part 255 : “Guides Concerning the Use of Endorsements and Testimonials in Advertising.”