Marriage is a wonderful gift from God. There’s nothing quite like the relationship that a husband and wife share. There’s a special closeness and uniqueness in the relationship that cannot be compared. The wedding ring I wear serves as a pointer to greater reality of the bond I share with my wife. I remember when my wife and I were dating and later engaged, and we became very close. We went everywhere together, we shared wonderful memories, and grew in love for one another. Yet, there was always a level of finitude while we were engaged; it wasn’t yet permanent. Our entire relationship grew as everything we did became a foundation for a marriage. All of our activities focused on the planning of the wedding, finding a place to live, and starting a family. The times we shared in deep conversation, and dreaming of the future were wonderful, but nothing beats the real thing. I believe that’s generally true of everything.

In Hebrews 8:6, we are told, “But now He has obtained a more excellent ministry, by as much as He is also the mediator of a better covenant, which has been enacted on better promises.”[1] The Old Covenant types and shadows were great. Under men like Moses, God’s people could worship him and have their sins forgiven as they believed the promise of the coming Messiah who would fulfill all the types and shadows. They even had the law written on tablets of stone to remind them of God’s provision and care for them. Note the preamble to the ten commandments: “I am the LORD your God who brought you out of the land of Egypt, out of the house of slavery” (Deut. 5:6). Not only that, but Israel had covenant signs that would remind them of God’s faithfulness in the act of circumcision and the Passover supper. Israel’s covenant relationship with God was gracious and brought many benefits.

However, this should spark a question: if it was so great, what makes the New Covenant better? Well, the simple answer is Jesus. Everything Israel did under was a foreshadowing and picture of the substance of what was to come. Under the Old Covenant, the mediators would die, and another would have to take his place. Each priest’s work would involve endless blood sacrifice and offerings on behalf of a sinful people. Day after day, animal after animal, sacrifice after sacrifice, a grueling work indeed. Circumcision, the sign of the covenant community, was also a bloody reminder that there would be no forgiveness without the shedding of blood. The literal cutting away of flesh symbolized a very real spiritual reality. All of this was done by faith and in anticipation of the coming redeemer who end-all of the blood sacrifices.

The New Covenant instituted by Christ is permanent. God’s people are the bride of Christ, forever married to their faithful bridegroom. The promises of forgiveness of sins and the final sacrifice being laid on the final altar before God is no longer a future event. The foundation has been laid, and the day of anticipation is over. Christ has come to rescue his bride once and for all. The Priesthood of Christ will never end as he ever lives to intercede for his people (Heb. 7:25). No more altars are needed, and no more blood needs to be shed because his sacrifice was sufficient, and it was permanent.

We have been given the sacraments as reminders of the promise of Christ. Even they are better as they are no longer a bloody sacrifice but one of water and one of bread and wine. They point to a greater promise as well, as they not only point towards the need of forgiveness and the coming of a promised redeemer, but they point to the greater reality of the finished work of Christ. They serve as a means of grace that communicates the benefits of the resurrected Christ to his people. These wedding rings are great, but they point to something else. As the Puritan William Gurnall once said that “the promise is the marriage-ring on the hand of faith; now we are not married to the ring, but with it to Christ.”

[1] All scripture references are from the NASB unless otherwise noted. 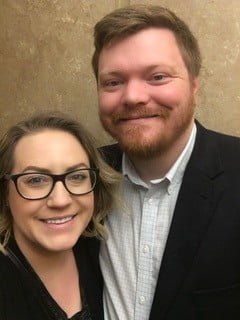