I wanted to wait at least a week to write about my own response to last week’s tragic shooting in Aurora. Partly because I can’t even begin to imagine the horror, shock and (just now, I’m sure) onsetting grief of the families who lost loved ones. Like many of you, I have spent the last week tearfully watching the accounts of horror and heroism that have emerged from that Colorado movie theater. But there is another reason I have waited. Almost two thousands miles away, my 13-year-old daughter and I were at the midnight premier of the Batman movie. I needed some time to process that too.

It was a wonderful evening. Samantha and I met my brother and sister-in-law at the theater at 11:15- it was already packed. We purchased absurd amounts of popcorn and treats and spent 45 minutes in the crowded theater analyzing the previous two installments of the film franchise. Could Bane come anywhere close to rivaling Ledger’s performance as the Joker? Would Batman die at the end of this one? Is Christopher Nolan REALLY done with the series? It was trivial, random and completely fun! We thought the movie was terrific, and Samantha and I drove home at 3:30 wondering if we were going to be able to settle into some semblance of sleep.

Needless to say seeing the reports of carnage and chaos the next morning on Fox News hit home in a way that may have been somewhat different had we not been at the premier. A few days later my daughter asked me the question.

“Dad- it could just have easily been us, couldn’t it have?”

I don’t why it is but for every parent it seems almost instinctive to say, “No- we were safe, Samantha. Those things hardly ever happen.”  Understandably, we don’t want to talk to our children about death. But I am grateful the grace of God enabled me to respond far better.

“Yes- Samantha. There is no reason but God’s providence and pleasure that we didn’t die.”

That’s exactly what I said. As I uttered those words it was almost like an out-of-body experience. It was like watching a stranger address my daughter in a harsh tone. I wanted to rebuke myself!

Samantha has had a difficult year. My father-in-law, her precious Pop Pop died this past fall; and her spiritual Pop Pop (Roscoe Adams- my precious pastor) died this past April. I can’t deny there was a sadness in her eyes, but she surprised me. She simply nodded in an understanding way and went back to her day with an ever-maturing theology I never expected her to have so young.

I don’t presume to be an expert on exactly when to speak plainly to our kids about death. 13 is certainly a pretty safe age, I think. But my main concern is that all of us as Christian parents strive to tell our kids that this life is really the “pre-life.” A thousand years from now and ten thousands years beyond that our kids will be living- in one of two neighborhoods. How can I not prepare them for that reality?

Those dear people in Aurora were just like my daughter and me. One moment buzzing about Hollywood glitz, having some innocent fun- the next moment standing before their Maker. Only providence were Samantha I permitted to go on living in this “pre-life” for a period of time known only to Him.

in your book were written, every one of them,
the days that were formed for me,
when as yet there was none of them. – Psalm 136:16

I had a vague memory of the eloquence of John Piper talking with his own daughter about a tragedy in his neck of the woods some years ago. Google easily let me find it even though it was five years ago. Piper said it far better than I could.

We prayed during our family devotions. Talitha (11 years old) and Noel and I prayed earnestly for the families affected by the calamity and for the others in our city. Talitha prayed “Please don’t let anyone blame God for this but give thanks that they were saved.” When I sat on her bed and tucked her in and blessed her and sang over her a few minutes ago, I said, “You know, Talitha, that was a good prayer, because when people ‘blame’ God for something, they are angry with him, and they are saying that he has done something wrong. That’s what “blame” means: accuse somebody of wrongdoing. But you and I know that God did not do anything wrong. God always does what is wise. And you and I know that God could have held up that bridge with one hand.” Talitha said, “With his pinky.” “Yes,” I said, “with his pinky. Which means that God had a purpose for not holding up that bridge, knowing all that would happen, and he is infinitely wise in all that he wills.”
Talitha said, “Maybe he let it fall because he wanted all the people of Minneapolis to fear him.” “Yes, Talitha,” I said, “I am sure that is one of the reasons God let the bridge fall.”
I sang to her the song I always sing,

Come rest your head and nestle gently
And do not fear the dark of night.
Almighty God keeps watch intently,
And guards your life with all his might.
Doubt not his love, nor power to keep,
He never fails, nor does he sleep.

Talitha is sleeping now. But one day she will die. I teach her this. I will not always be there to bless her. But Jesus is alive and is the same yesterday today and forever. He will be with her because she trusts him. And she will make it through the river.  (Click here for the full post).

I am so thankful for Piper’s eloquence. But I am even more thankful for the promise of the gospel- the world is temporary- but Jesus has secured an existence for his people in the world to come! May God help us teach our kids this glorious news. 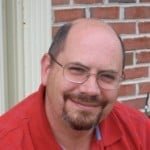