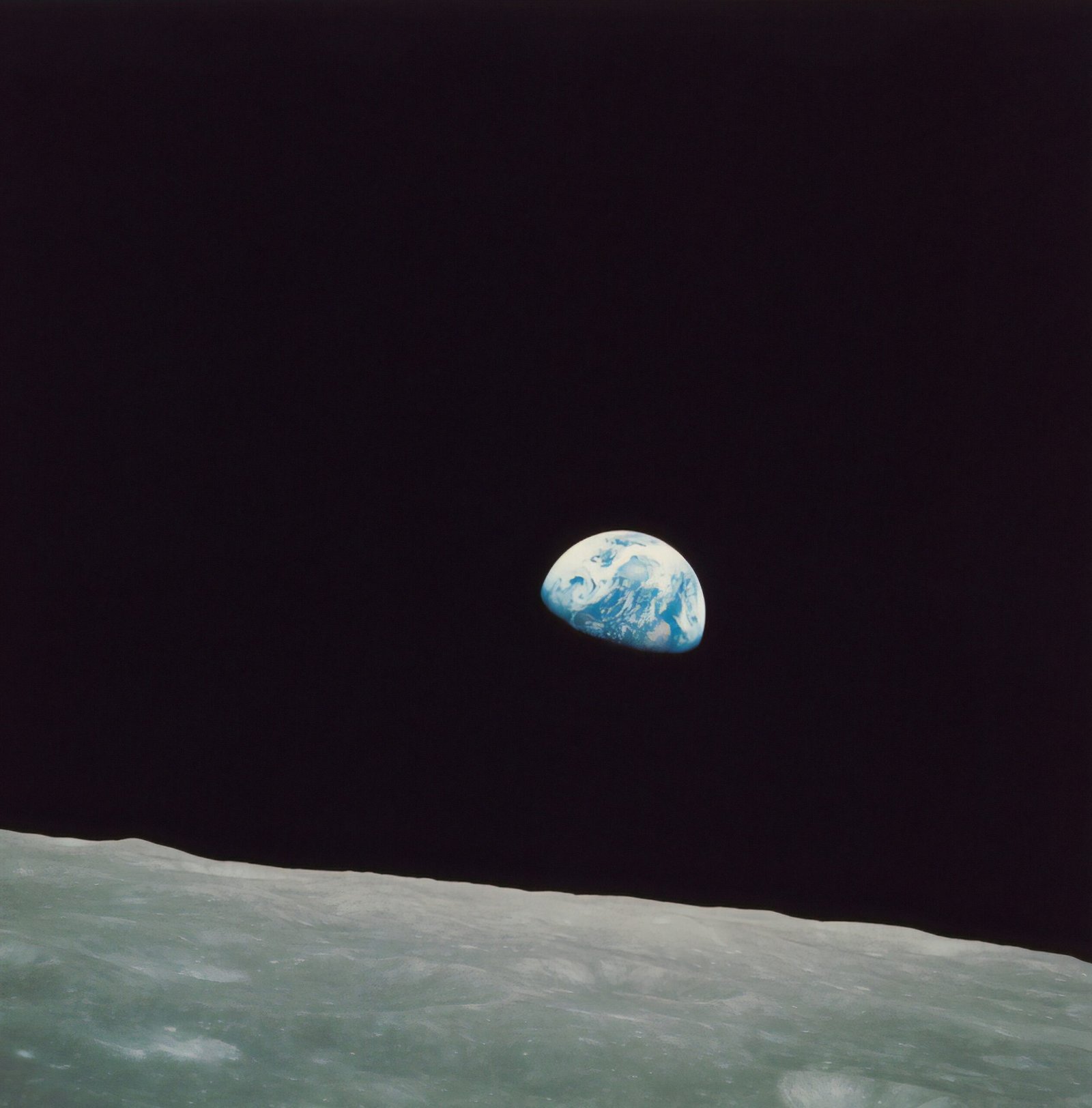 Apollo 8 and the Faraway World of Pastoral Ministry

Perspective allows you to see farther than you can look.

Take Apollo 8. The crew of William Anders, Frank Borman, and James Lovell were a hurry-up “dream-team” thrown together by a pressure-cooker NASA Leadership and a beleaguered US president named Lyndon Baines Johnson. A promise made by a slain American president had a due date. Kennedy’s promise, made inviolable by his assassination, was coming due. The goal? To beat the Soviets into a lunar orbit mission. The Russian Communist regime was leading the space-race. They were aiming for the moon; about to hit the target. All of that changed with a mission called Apollo 8. Sitting atop a veritable nuclear bomb being detonated beneath “Rocket men” and strapped in for the fastest speeds in human history, the blast-off would happen at Pad 39 at Cape Canaveral.

I still remember that Empire-State-Building of-a-rocket rising slowly by inches off of the earth. “There she goes,” Walter Contrite’s pipe-tobacco voice is still lodged in a piece of my gray matter up there. The mission was a success in every way. Though Apollo 8 was a “scouting” mission for the ultimate in NASA plans, of fulfilling President Kennedy’s promise to land a man on the moon and safely bring him home before the end of that tumultuous decade, the hurried scheme reached numerous milestones: the first humans to leave earth orbit, the first human in outer space, the first to test the “figure eight” space flight plan of using both earth’s gravity and the moon’s as an astronomical sling-shot to create power, the first humans on the dark side of the moon, the first to enter the gravitational field of an alien world, to see the moon from 69 miles above its dead-gray, crater-covered surface, and the first to go into outer space and make it back to kiss their waiting wives and embrace their worried children.

Beyond those milestones, all of which, despite these fifty years later, remains incomprehensibly stunning, there was another first. The milestone that impressed—no, thrilled—the astronauts into sheer euphoria was an unexpected sight. When the crew came from around the moon and were greeted by an “earth-rise,” they became, well, perhaps like the crew of Columbus upon seeing Gibraltar, elated over seeing home. The astronauts scrambled for the camera and lens. Each well-disciplined military man was now just a child in the family station wagon at Yellowstone, scrambling to take a picture of the baby moose before it scampered away. They pulled it together. They snapped a photo. “No, take more!” In a mission in which each action is planned, this spontaneous display of exuberance was not in the carefully scripted NASA planning book. But who could have anticipated just how transformative was the image of the earth, of home?

The awe-inspired team witnessed a “royal blue” jewel sparkling like a Tiffany diamond against the black velvet backdrop of a vast, lifeless, foreboding space. Robert Kurson unforgettably described the impact in his exciting book, Rocket Men:

“As Apollo 8 came around the limb of the Moon and readied to reconnect with home, it seemed to Anders so strange—the astronauts had come all this way to discover the Moon, and yet here they had discovered the Earth.”

And that is the thing: you often have to make an arduous odyssey to a far-away place to realize the incomparable gift of home.

A fresh perspective can surge like an erupting volcano when the right conditions are in place. Our consciousness may be stimulated in many similar ways (okay, maybe not so similar as a literal circumference of the moon). For preachers, transformative awareness can come in many ways: when you realize that the greatest heroes in your ministry are not your seminary professors or that giant in church history; or even the missionary you heard as a teenager whose stories of sacrifice for Christ lit a fire within you that has never gone out. Ethereal epiphanies often break through just as you are coming round “the dark side of the moon” (or “the dark night of the soul”). You see the indescribable beauty of the irreplaceably familiar. You see familiar clips of life and ministry with new eyes.

You were invited to the vigil of a family gathered in sullenly anticipation of death’s inevitable soon-arrival. After a frantic morning of budget meetings and a prayer offered at the Rotary Club, you are now standing before the white-sheet-wrapped, diminutive, dying figure of a woman, who gave her life to a career military-man, reared six children on enlisted pay, from Europe to Korea, from dusty outposts in the deserts of the American West to the freezing nights in a two-room apartment in Poland. You listened and learned the stories that would solidify as family narrative heirlooms in only a few years: The family moved twenty times in thirty years. “Mamma always made it home,” one of the quieter adult sons spoke. You hear of her faith in Christ that transcended her trials. The adult children—flown or driven in from wherever “Mom and Dad” were stationed at the time of his or her formative years—re-unite, somewhat awkwardly, around the woman they each called “Mom.” Their teenage and adult children stand behind the dying woman’s children, their parents, their aunt, and uncle. The grandchildren are somewhat lighter of mood.

One young lady has a baby, Mrs. Rutherford’s Great-granddaughter. Another young lady is obviously expecting any day. “Life, death, cycles. It’s always like this . . .” you think to yourself as you assess the scene. You are brought back to your role with a light touch on your shoulder. The eldest daughter whispers through wadded-up pink and ivory embroidered linen covering her nose. “Pastor, will you pray while we are all here? Mamma is about to go home and see Daddy. And Aunt Wilma really needs to go lie down, now.”

That is the moment. Your own little spaceship is whirled by an alien (Divine) force from around the silent shadows of your pastoral vocation, the deep void of ink-black space: interminably contentious board meetings that made you compose a resignation letter (unsent), failed marriages that made mockery of your counseling, the “unintentional dragons,” bruised, battered, and biting, created by an indecipherable pain in a vine-twisted, overgrown lot somewhere lost in their mysterious lives. The dark side of pastoral ministry is a necessary stage in the figure eight pathway of service. Just as you come around the dark side, you see it. The “royal blue” planet, the vapor of life surrounding the terrestrial ball, and the sparkling diamonds of living oceans burst forth like an epiphany after circling an uninhabitable world of gray. You get a glimpse of home, your vocational home, and “it is good.”

“Pastor?” Her voice brings you back.

“Yes, M’am.” Dreaming. Caught again. But, isn’t this what you were called to do? Pastoral ministry might be the only vocation in which one is expected to dream as you work. For you always have to consider the things before you within the cosmic context of a New Heaven and a New Earth.

You look around the hospital room to locate the adult children. With sympathetic eyes and a furtive smile, you gather the family together.

“Everyone, let us pray.”

You had thought about what to say. You were still smarting from a staff meeting that had gone sour. You had missed another of your daughter’s dance recital for a finance-committee meeting. There, you wrestled with demonic spirits in an unfulfilled banker who vetoed every new missionary request. In the hospital garage, you had parked your Toyota in the “Clergy Parking” (though your “clergy sticker” expired several years ago). You killed the engine. That pulled the plug on Gustav Holtz, your own private escape module, to “The Planets.” It’s quiet again. In recent days silence has disturbed you. “That’s when the doubts come,” you had confided to your wife. You rest your head, with clenched fists, on the steering wheel. “It’s too much,” you had whispered to the God you have staked your life on. But all that was an eternal moment ago. Now, in one second, in the touch of a grieving daughter’s hand, before the image of a Bible-story faith pulsating life in a dying old woman, you see. You see the gloriously celestial, heretofore hidden, in the unexpectedly familiar. And in the vision of a life well-lived, a faith forged-in-fire, a legacy of love that grew green and grew strong, even in the contaminated soil of life’s ordinary tragedies, you realize again why you were called. You recognize who the real heroes and heroines of the Faith are, and why it is that Christ used the metaphor of a shepherd to describe who you are, as much as what you do.

You come to the crescendo of your brief prayer over the dying figure. You are so caught up in the majesty of Christ alive in this picture of death that you must brace yourself on the nightstand next to the hospital bed. It feels like the hundreds of thousands of miles between the earth and the moon have passed before you like an Apollo rocket into a free fall. You catch your breath. It is well with your soul. And so you speak softly, as you listen for the voice of the One who is always there. You come to the close of your prayer. You look to the older liturgies, the comfortable words, and a faithful means to gather the voices in the room as one.

“And so, Lord, where else can we go but to You? Therefore, we say together, that prayer that Jesus taught His own to pray, saying,

You are at home.