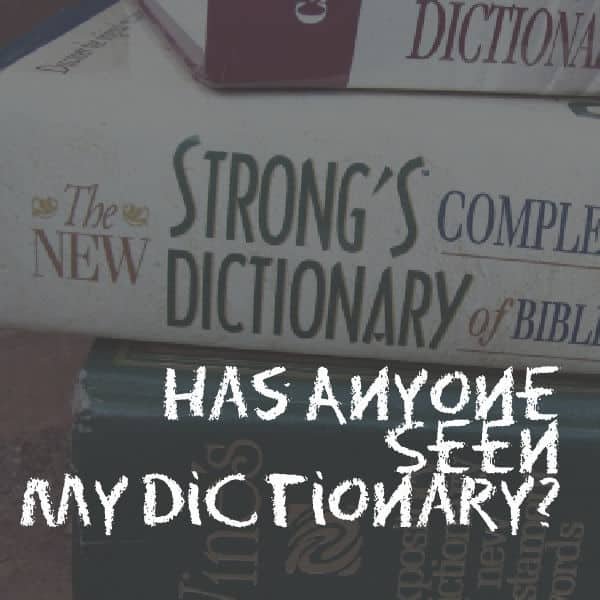 Anyone Seen My Dictionary?

There exists today a rampant problem of biblical illiteracy. Dr. Albert Mohler, in addressing this grave issue, recently noted, “The larger scandal is biblical ignorance among Christians. Choose whichever statistic or survey you like, the general pattern is the same. America’s Christians know less and less about the Bible.”[1] While biblical illiteracy can present itself in many forms, one blatant example I have observed over the past several years is the issue of the proper definition and application of biblical terminology.

Part of the problem is quite frankly a matter of translating from one language to another. While the Bible translators for the most part over the centuries have done an admirable job of relaying the intent of the words used in the original biblical languages, there are admittedly occasions when important matters are lost in translation. Furthermore, there are many instances when an improper approach to a word, phrase, or overall pattern/principle in Scripture can have a marked impact on how we interpret what God is saying in His Word.

This passage is often used as a proof-text for the idea that the law was done away with at the coming of Jesus. It is argued that we now live in an age of grace and the age of law is no more meaning all of the requirements noted in the law have been abrogated. This approach is rooted in the word “fulfill”. Does the word “fulfill” really mean what so many have come to think it means? This is an instance when our understanding of fulfill is disconnected from the understanding inherent in the original language. Let me demonstrate why.

For starters, Jesus begins the verse by clearly noting he did not come to abolish the Law or the Prophets. There are two points that must be made regarding that statement. The first is the word abolish. Now in English, abolish is a good translation given to abolish something means to do away with it. Some translations use the word destroy. Both abolish and destroy appropriately define the Greek verb katalyō which is defined as “to dissolve, disunite”. What we have here is Jesus telling us he did not come to dissolve or disunite the Law or the Prophets. This leads us to the second part of what must be examined in the first portion of this passage. The phrases “Law and the Prophets” or “Law or the Prophets” refers to the Old Testament. The Law of course refers to the portion of the Old Testament often referred to as the Torah. The Prophets was a term typically used to refer to the Old Testament. There is no lack of clarity on the part of Jesus here.

This brings us to the second part of the passage, the section most often quoted and most often incorrectly interpreted. Jesus says that while He did not come to dissolve or disunite the Law or the Prophets, He came to fulfill them. The term fulfill most often is understood to mean completed with the additional idea connected with it of doing away with the Law. After all if Jesus fulfilled the Law, He took care of it all for us and we no longer have anything to do with that which he took care of, right?

The answer to that question is unequivocally no. This is again a prime example of where biblical illiteracy rears its ugly head. The promotion of the term fulfillment as proof that God’s Law has been completely abrogated in all aspects in the life of the New Testament believer is rooted in the aspect of biblical illiteracy known in dictionary as aversion. If one looks at what the original word means, in this case the Greek verb plēroō, it would become rather clear as to what this idea of fulfillment actually means. While plēroō has a variety of meanings, language experts agree the meaning of the term as applied to Matthew 5:17 is “to cause God’s will (as made known in the law) to be obeyed as it should be, and God’s promises (given through the prophets) to receive fulfilment”.

Do we see any element of God’s Law being abrogated? Not in this passage. Jesus makes it quite clear He did not come to dissolve or disunite or abolish the Law. What He came to do was to demonstrate how to follow God’s Law perfectly and to fulfill the promises of God made through the prophets in relation to the coming of the Messiah. Certainly Jesus came to do that which we can never do, namely perfectly follow God’s Law. However, this does not mean that obedience to God’s Law is not a part of nor should be a vital element in the life of the believer. We are commanded to be holy as God is holy. Jesus showed us what that looks like, thus fulfilling the Law in all respects.

The purpose of this post is not to get into a dissertation on the purpose of the Law. Rather, my desire is to provide a typical example of biblical illiteracy as revealed in the form of dictionary aversion. We have to be cognizant of properly defining terms. If we fail in this pursuit, we will more often than not incorrectly interpret and apply these terms. Matthew 5:17 is a perfect example of what happens when a single term is misunderstood.

Defining terms in original languages is not the sole purview of the academics or Greek and Hebrew language experts. There are many tools available, both online and in print that provide excellent help in understanding word meanings in their immediate context and how those terms are used throughout Scripture.

Do not become a victim of dictionary aversion. Search out with diligence what words, phrases, and concepts in Scripture truly mean. There will be times when the previously held beliefs and perceptions you have held may be challenged. When that happens, be willing to accept the challenge and if need be, alter your understanding to a more correct position, one that maintains consistency with the biblical message.