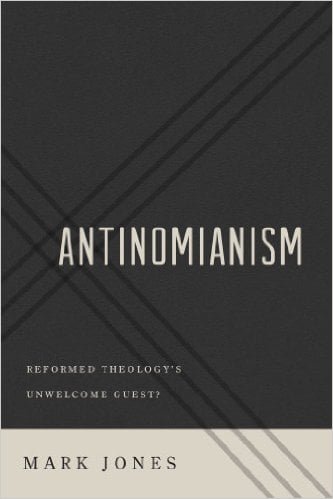 by Mike Boling | Apr 13, 2016 | The Doctrines of Grace: Understanding the Heartbeat of the Gospel, Featured

The debate over the relationship between law and gospel has been waged since the time of the Christ, with some affirming justification by the grace of God which provides the believer freedom from the law, and with others declaring a more legalistic approach suggesting that salvation includes a heavy dose of law keeping. Somewhere in the middle of those two extremes lies the biblical approach to justification and sanctification. In his book, Antinomianism: Reformed Theology’s Unwelcome Guest, Mark Jones makes the effort to explore this topic using the 17th century debate that waged on this very topic as the backdrop for his discussion.

While the word antinomianism means “against God’s law”, one would be hard-pressed to find a theologian or pastor, at least one worthy of such a calling, presenting the idea that the believer is no longer tied to any sense of obedience or structure by which obedience can be determined (i.e. the law). Jones rightly notes that defining the term antinomianism and identifying those who follow the tenets of that construct is difficult, unless this approach is examined as “a system of thought…carefully understood in its historical context, rather than simply according to its etymology.”

In the first chapter, Jones explains in great detail the historical background of antinomianism, its adherents, as well as those who spoke and wrote against this view. He acknowledges that the first antinomians were Adam and Eve, with their misunderstanding of God’s grace and His commands to not eat of the tree of the knowledge of good and evil. With that said, Jones spends most of his efforts looking at this issue as it existed at the time of the Puritans, in particular in England and New England. While some may view this as an unnecessary historical interlude, understanding the viewpoints of those both for and against antinomianism, to include how theological constructs such as justification and sanctification were seen by the Puritan divines, as well as those of the antinomian persuasion is vital to grasping how this issue developed over time.

Building on that historical foundation, Jones then makes the salient comment that “discussions and writings on holiness often lack a strong Christological basis and center”, further noting “without a robust affirmation of the holiness of Christ, and all that means, calls to holiness, however stirring they may be will inevitably devolve into a form of man-centered pietism.” The proper balance between gospel and law, grace and obedience are rooted in a correct understanding of the person and work of Christ. Those without an adequately developed Christology often center their theology far too much on the grace extended to the cross, while ignoring the life Christ lived on our behalf, a life that also provides the believer the standard for holiness. This includes some level of human responsibility for obedience to God’s commands, which is something those of the antinomian persuasion vehemently argue against. As Jones notes, the antinomian often believes there is “no longer a continuing role for God’s moral law in the life of the believer.”

Of particular note in recent conversations is the role of the law in the life of the believer. Jones aptly comments, “The role of the law in the life of the Christian has historically been one of the most difficult and contentious points in divinity.” Addressing many of the concerns that have existed over the years on this issue, Jones ably works through the various positions on the role of the law demonstrating the tension that exists among theologians on this important issue. This concern was rampant during the 17th century, and Jones spends a good deal of time looking at the opposing positions. He speculates that when it comes to trying to define the position of the antinomian camp, “A close reading of antinomian writings from the seventeenth century shows that they were not always clear. Ambiguity was a hallmark of their utterances on the law, and they lacked the sophistication found in the writings of men like Sibbes, Goodwin, and Owen.” While the antinomians often looked for the means by which to diminish the importance of the law, the Westminster Confession of Faith and the sermons and writings of the Puritan divines viewed obedience to the law as a continued importance for the believer. Jones states, “Because of the greater indicatives of the new covenant, the imperatives are not relaxed, but in fact are strengthened.” He is also careful to note continually that any level of obedience is through the work of the Holy Spirit, and the process of progressive sanctification, thus avoiding any implication that somehow the believer can accomplish good works on their own.

Another valuable argument in this timely book is that of the issue of rewards—a discussion sorely missing from the sermon series of most pastors today, likely due to the association of rewards with the supposed naughty term of “law”. Jones engages some hefty theological terminology in this chapter, such as the word impetration, a term related to Christ’s mediatorial work. The issue, as Jones sees it, with the antinomian approach is that it “essentially blurred the distinction between impetration and application. They were so concerned to maintain the graciousness of salvation that they not only denied that there were no conditions for salvation, but also suggested that even in the application of salvation man does not “act.”” While some may balk at the idea of any condition for salvation, Jones is careful to define that phrase even further noting, “The Reformed held firmly to the view that the elect have no role in impetrating their salvation. That hone belongs exclusively to Christ. But in the application of salvation, man plays a role…”, meaning there is the need for the bride to be obedient, through the work of the Holy Spirit, bringing her to a place of maturity in the faith.

With books on this subject matter, it is quite easy for the author to slip into an accusatory and polemic writing style, along the way lambasting those who take the opposing position. Jones thankfully avoids such an approach, instead choosing to work through the antinomian position, and the Reformed position, in great detail and with much grace, observing the complexity of the issue being discussed. Jones leaves the polemics at the door, instead approaching this subject matter with theological precision, and with a focus on demonstrating the apparent pitfalls of the imbalance found in the antinomian position regarding obedience and the place of God’s law.

I highly recommend this book for the more seasoned believer and especially for pastors and Seminary students. Holiness is a vital part of the Christian walk and understanding the proper balance between the indicative and the imperative, two intimately related aspects of justification and sanctification. Mark Jones outlines for the reader the proper approach to the issue of law and gospel, and this is a book that will serve as a needed corrective for the problematic extremes of too much grace and too much law.