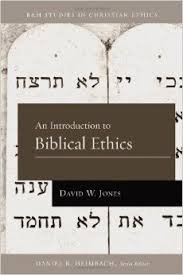 An Introduction to Biblical Ethics 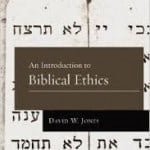 I remember sitting in one of my philosophy classes back in the early 2000’s at a local community college in the Greater Seattle area thinking that one of the most neglected topics of Christian writing and thinking has to be the topic of ethics. In the past few years, this thesis has been overwhelming changed with the advent of blogs and social media. Now Christians comment more on ethical and contemporary issues than ever. A new book Introduction to Biblical Ethics by Dr. David W. Jones seeks to explain the relevance, coherence, and structure of the moral law as revealed throughout the Bible. Using as his guide the Ten Commandments, the author helps Christians understand the place of the moral law in the Christian life. With a particular focus on the moral law in the Christian life, this book will help readers understand it’s place and significance in the Christian life.

Often times Christians misunderstand what Jesus means by He says He came to “abolish” the law in Matthew 5:17-20. Christians are no longer under the law but under grace (Romans 6:14). We have been released from the law (Romans 7:6) and its tutelage (Gal. 3). Christ didn’t come to abolish the law but to uphold it (Matthew 5:17), since He is the end of the law (Rom. 10:4). This explains why Christians are freed from the curse of the law through the finished work of Jesus.

The Ten Commandments provide a roadmap for how Christians ought to live. During Jesus’ ministry, He repeatedly talked about the Ten Commandments and their importance for ethical living. One example of this is in Mark 10:17-22, where He repeated the second table of the law to the rich young man. Other examples include the Apostle Paul in Romans 13:8-10 and 1 Timothy 1:8-11. In addition to this in Romans 7:12 Paul taught that the commandments, even under the new covenant are holy, righteous and good. Jesus also taught that He is the fulfillment of all of Scripture (Matthew 5:17-20, Luke 24).

In the Old Testament, the people disobeyed God and treated His commandments as if they were just another perfunctory religious activity. As Christians, we can do the same if we don’t understand that we are saved from sin and to the Lord Jesus. What I’ve been describing shows up especially among some Christians who think that because they’ve been saved by sovereign grace, they can live however they want. The Apostle Paul counters this idea in Romans 6:1 by stating, “May it never be.”

As I noted earlier often times Christians misunderstand what Jesus means in Matthew 5:17-20. First, Jesus came not to destroy the law but to fulfill its demands. Through His sinless life and death on the cross, He fulfilled the civil, ceremonial and moral laws. Christians, today can obey the moral law by the grace of God. The only way for anyone to obey God is to be born again.

Second, Christians through the Holy Spirit are empowered to live by the truth of the Word of God. Jesus, the God-Man not only lived a sinless life by dying in the place of sinners and for their sins, but also perfectly obeyed the Law, performed miracles and gave His people the power to obey Him through the Holy Spirit. Through Him Christians can resist sin and put it to death by understanding how He resisted sin in the power of the Spirit (Luke 4:1) and prayed in the power of the Spirit (Luke 10:21). The Holy Spirit convicts God’s people of their sin and points them to the finished work of Jesus. Jesus is now our High Priest and Intercessor before the Father. In this role, He functions as our advocate (1 John 2:1-2) while praying for us to stand strong in His grace.

Finally, seeing Jesus in all of the Scriptures helps us to understand not only the nature of the law, but its purpose or design. The Holy Spirit empowers God’s people to proclaim the sinfulness of man (Romans 1-3) in order that they might make known to sinners how they can be declared not guilty through Jesus who transfers sinners from the kingdom of darkness to the Kingdom of the Lord Jesus. Through Jesus’ finished work, He makes a people who were once not His people, His people by giving them a new identity (Romans 6) through which they can fight indwelling sin (Romans 7) by realizing they will ultimately one day, as they grow in Him, become like Him (Romans 8). The only way believers are able to live in obedience to the Ten Commandments is because of Jesus’ death, burial and resurrection since He is the fulfillment, goal, and end of the law.

This excellent new book will help you to understand the place of the moral law in your Christian life. Regardless of if you’re a new or mature Christian reading Introduction to Biblical Ethics will help to challenge, and grow you in your knowledge of this critical doctrine. I highly recommend this book and believe as Dr. Akin said in his endorsement of this book that it will become the new standard textbook for biblical ethics.

Title: An Introduction to Biblical Ethics

I received this book for free from B&H Academic for this review. I was not required to write a positive review. The opinions I have expressed are my own. I am disclosing this in accordance with the Federal Trade Commission’s 16 CFR, Part 255: “Guides Concerning the Use of Endorsements and Testimonials in Advertising.”