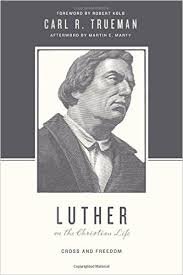 A Review of “Luther on the Christian Life” by Carl Trueman

Martin Luther, the great German reformer, has become something of a caricature of modern Evangelical interests. What most of us know of Luther represents this idea more closely than it does the actual man of history. Carl Trueman knows this and aims to correct it in some degree with his contribution to Crossway’s Theologians of the Christian Life series. Luther on the Christian Life introduces readers to a more accurate picture of the great Reformer.

The book’s eight chapters are packed with quality scholarship. Though written as part of a popular level series, Trueman does not slouch on addressing the complex issues of Luther’s context and thought. Far too much contemporary discussion of Luther centers around simplistic and reductionist explanations of the man and his theology. Trueman sees in particular the ways in which we have reduced Luther to his pre 1525 work, despite the fact that the man “had another twenty-one years of active theological life before him” (160). In fact one of Trueman’s major arguments in the book is that the post 1525 Luther is “vital for understanding his view of the Christian life” (24). Trueman, then, introduces us to a Luther that is often overlooked, ignored, or completely unknown to popular Christianity.

Trueman walks us through in each chapter some of the major developments in Luther’s theology that demonstrates his overall view of the Christian life. Chapter one gives us a sketch of Luther’s life, a point of reference for the remaining content in the book. The chapters that follow focus in on other major issues: theologians of the cross and theologians of glory, the creative power of the Word, the importance of liturgy, the significance of the corporate gathering of the body, and the pursuit of holiness. In each case Trueman emphasizes the nuances and evolution of Luther’s thought. In some cases I was surprised by just how simplistic my own understanding of Luther has been.

One example may help to illustrate this. I have often heard Luther quoted, indeed often quoted him myself, as saying:

While I slept or drank Wittenberg beer with my Philip of Amsdorf the Word so greatly weakened the papacy that never a prince or emperor did such damage to it. I did nothing: the Word did it all.

It’s a famous and beautiful quote that speaks to the power of the preached Word of God. But Trueman shows, quite convincingly, that these were the words of a young, somewhat naïve Luther. That in fact later in life, post 1525, Luther saw that he needed to do more. That the Word preached was not enough to continue the reforms. There must be discipleship, catechizing, and liturgical changes. What we often see of Luther is a man still early in his understanding of the reformation. The whole picture shows us a Luther who was evolving in his understanding and application of the truth to the reformation project that he had begun. We want a fully-formed Luther in 1517, but we don’t get one.

There’s much to commend to this work. In some ways it is more academic than some of the other volumes in this series. While Trueman spends several pages discussing the linguistic theory of late Medieval theology (82-84) some readers will, no doubt, get bogged down in the philosophical discussion. Yet, Trueman does a good job of keeping things as accessible as they can be, and without losing readers in a sea of esoteric detail. He also shows the relevance of these contextual issues for understanding Luther. Too much popular history ignores these details and presents to us, as a result, a simplistic figure who is more myth than man. I loved this volume.

Luther has been something of an obsession of mine for years, since I first discovered him as a college student. Trueman added some great depth to my understanding in this focused volume. Readers who are familiar with much of Luther’s story will find a wealth of new insights in this book. It is a great addition to the Theologians of the Christian Life series.