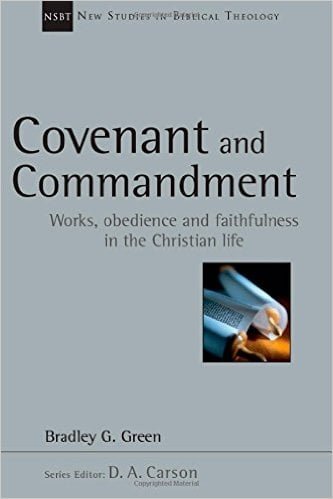 A Review of “Covenant and Commandment” by Bradley Green

The New Studies in Biblical Theology series from IVP is one of my favorite academic collections. Each volume does an impressive job of providing comprehensive and fresh examinations of Biblical, theological concepts. It’s for this reason that Bradley Green’s recent contribution to the series was so disappointing. Covenant and Commandment is not a bad book. Its content is good and represents even the stream of theological conviction that I hold. My main issue with this book is that Green offers us little on the relationship between works and faith. Covenant and Commandment, in my opinion, doesn’t live up to the expectations I have of the other volumes in this series.

The book is brief (170 pages). Owing to its size and scope the expositions of the text are often short, feeling more like textual glosses than actual interactions. Green does attempt to give us something of a biblical-theological examination of “works, obedience, and faithfulness in the Christian life.” He argues, ultimately, that “works are a God-elicited and necessary part of the life of the converted person” (17). He does this by exploring both the Old and New Testament discussions of the role of works in response to the grace of God. He makes connections between the seven chapters to various doctrines (Atonement, redemption, sanctification, union with Christ, justification, etc.). He also interacts fairly extensively with a cadre of Reformed theologians, ranging from John Calvin to Henri Blocher. He gives us an extensive excursus on John Owen, another one on Jonathan Edwards, and Gerhardus Vos, sometimes quoting these original authors at length. In my opinion, he does this to a fault, exhausting the reader with pages of quotations that do little to justify their inclusion. In fact, at one point I wondered why I shouldn’t just read Henri Blocher instead of Green.

There’s much to love about this book regarding its content, yet as an academic work, I found it didn’t add much to the current conversation. The relationship between works and faith is one of the most debated subjects in theology and has been since the time of the Apostle Paul. Writing a book on this issue has to be justified and warranted, it seems that Green lacks this justification. He rehashes old arguments, saying the same things again and again. He avoids any polemic throughout the book making his conclusions on significant debates either irrelevant or obvious. I was disappointed in this volume and rather surprised by all the praise it has gotten. I am willing to concede that perhaps I just don’t connect well with Green’s writing (I did not find his book The Gospel and the Mind very compelling either). I think my conclusions about this volume are fair. It is a good and simple work on an important subject. But as a scholarly volume, it does nothing to move the debates forward. Covenant and Commandment just doesn’t live up to the expected standard I have of the NSBT series.