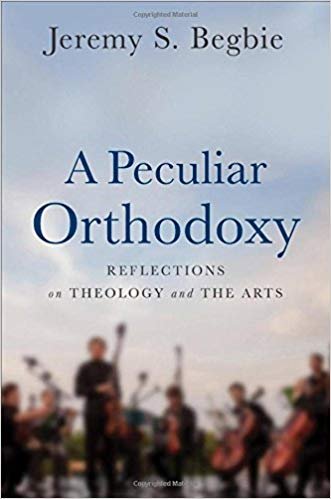 A Peculiar Orthodoxy by Jeremy Begbie

What Jeremy Begbie offers in A Peculiar Orthodoxy might best be described as “music therapy for theologians” (146). Although there has been a “flourishing of activity at the interface of theology and the arts” over the past 30 years, Begbie still believes many of these conversations have settled for vague illusions to spirituality rather than discussing the doctrinally specific and accurate revelations that can come through the arts, especially music (which is his specialty) (v). However, Begbie shows how music can offer “fresh modes and models of thought” to those who have been overly dependent on verbal and visual models to make sense of theological concerns (147).

For example, he uses the idea of a musical chord (2 or more musical notes played simultaneously) as a helpful way of imagining how divine and human agency might work together. In a chord “two audibly distinct sounds can interpenetrate without diminishing each other” and this provides an “extraordinarily apt aural analogue of the Spirit’s work” in the poet or other creative artist (125). The interpenetration of the chord might offer a helpful metaphor for those looking to describe the interpenetration and unity of the Trinity. “If we are to think oneness and threeness together in a manner appropriate to the New Testament but at the same time in a way that is not attentive to the dangers of being overdetermined by visual thought patterning,” using musical concepts might allow for new understandings. Begbie argues that “strenuous attempts to maintain threeness typically result in some form of precarious equilibrium” as we try to visualize how three beings might occupy the same space. On the other extreme “repeated appeals to ‘mystery’ in this context sound decidedly thin and unsatisfying, especially when compared to the fulsome and dynamic interpenetrative interplay of Son and Father.” And “heavily ‘socialized’ (near tri-theistic) trinitarianism” leads to its own dangers. In each instance, Begbie sees how “conceptual frameworks that favor spatial visualization and its associated language have likely aggravated and…perhaps generated a range of problems that have repeatedly frustrated and distorted” theology. All the while, audible imagery could offer us greater theological clarity (160).

The Search For Art and Orthodoxy

Over the past several years, I’ve been in search of books that celebrate art and orthodoxy at the same time, since most books on creativity tend to focus on only a vague spirituality. Begbie has noticed the same trend where people “run to the arts for refuge.” In contrast to the “overly secure, oversystematized, word-imprisoned Protestantism,” the arts seem to “promise…an allusiveness and openness that the discourses of doctrinal orthodoxy seem to disallow” (206). What Begbie models, however, is a celebration of all the ways that orthodoxy offers more than just a generic idea of a higher power when we approach the transcendent power of the arts. Instead, he offers piercing clarity through his insights into the arts. His thorough understanding of Bach allows him to see evidence the dynamic and specific saving work of Jesus Christ in Bach’s arrangements. While the arts do help us “avoid the linguistic imperialism that insists all meaningful activity be capable of reduction to declarative assertions,” he sees more in artistic expression than just rumors of transcendence (87); in his research into Bach, he has discovered that art can truly express “God’s graceful, reconciling action” in specific and orthodox ways (88).

To provide an example, Begbie celebrates how Bach’s music offers “consistency interlaced with directionality, unique interruptions that issue in fruitful subsequent change, an irreducible open-endedness that resists complete closure” which are “quite congruent with a vision of human history as being drawn toward a fulfillment by the God of Jesus Christ” (91-92). Unless readers are as familiar with Bach as Begbie, they will likely have to trust his insights. But anyone can admire his willingness to seek out specific, orthodox revelations in art. Although the arts rely on “allusiveness for much of their potency,” Begbie demonstrates how doctrine can enrich the arts and the arts can enrich doctrine. “Doctrine’s prime ministry to the artist is to direct our eyes and ears to that skandalon (of the gospel)…and the artist’s ministry to the doctrinal theologian is perhaps above all to remind him or her that no formal or technical language can ever encompass or contain its subject matter” (viii). His vision for a robust relationship between arts and doctrine should excite anyone who longs to see the gospel get the attention of our waiting world.

The only shame, both for other potential readers and for me, is that Begbie’s A Peculiar Orthodoxy is not more accessible to a non-academic audience. This book is a collection of essays written in response to other academic essays and for specific audiences. Thus, it presumes a level of familiarity with academic language in his discipline. No doubt it is a treasure for those in his discipline, but I look forward to reading some of his other recent works that were written for more casually interested readers on these subjects such as Redeeming Transcendence in the Arts and Resounding Truth.